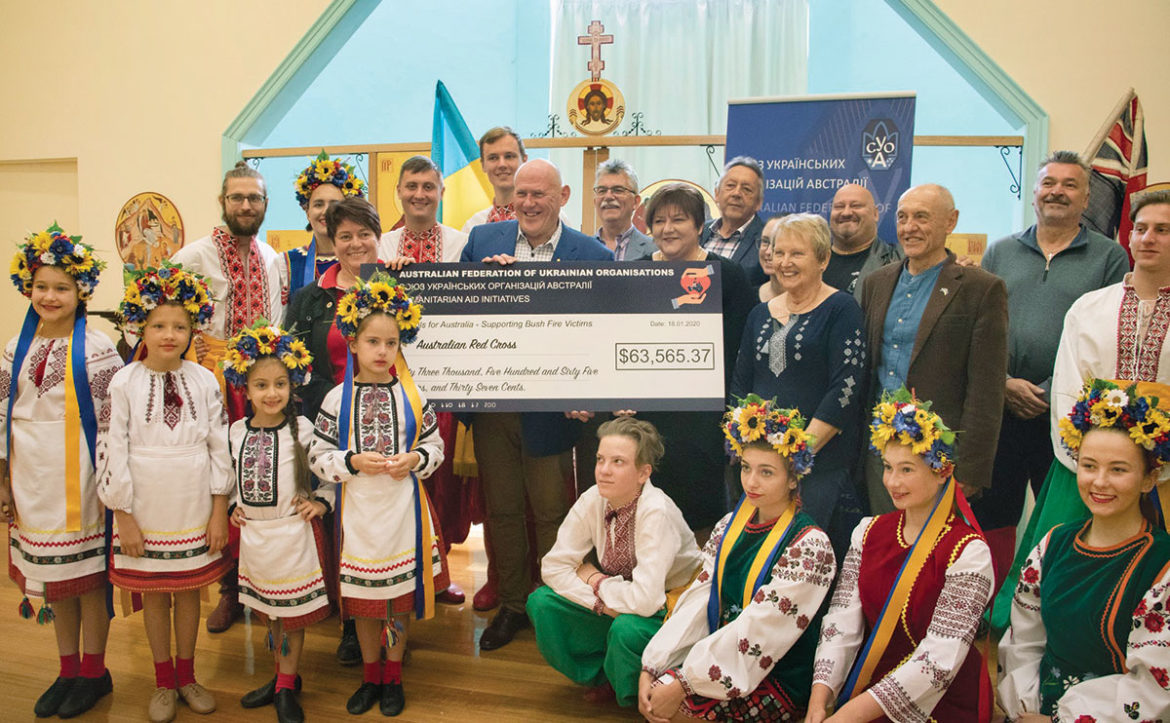 During the presentation on January 18 of a check to the Australian Red Cross encompassing donations collected among the Ukrainian community by the Australian Federation of Ukrainian Organizations. Since that day, the amount raised has grown to $67,000.

MELBOURNE, Australia – In reaction to the bushfires that have ravaged Australia, the Australian Federation of Ukrainian Organizations (AFUO) put out a call during the Julian calendar Christmas for the Kolyada for Australia Bushfire campaign, whose target was $50,000.

The Ukrainian Australian community demonstrated its unity of purpose and focus, and succeeded in raising $67,000 during the relatively brief Christmas period.

On Saturday, January 18, in Hobart, where the smallest Ukrainian Australian community was celebrating its 70th anniversary of settlement in Tasmania, the AFUO held a national meeting with the community and presented a check for the funds raised (at that point, the amount was over $63,000) to the Australian Red Cross.

The Australian Red Cross accepted the donations and recognized the huge effort of the community.

Over 350 people attended – a remarkable turnout for such a small community. Among them were representatives of different states who attended to support the Ukrainian Youth Association’s dance ensemble, Zahrava, from Sydney, which put on wonderful show. The anniversary celebration continued into the evening.

United around the AFUO banner, churches, youth groups, women’s groups, and local and state communities showed the might of Australia’s Ukrainian community. Some community groups came up with their own campaigns that fed into the AFUO project: for example, the National Executive of the Ukrainian Youth Asso­ciation initiated a dollar-for-dollar program that raised over $17,000 and the Noble Park Branch of the Association of Ukrainians in Victoria ran a Go Fund Me project.

The Kolyada (carols) campaign was launched on January 4 and ran through January 13.

Australia and Australians are familiar with bushfires. The fires that started in late September 2019 in New South Wales are still burning. Fires burning in Victoria, the neighbouring state, have claimed lives and properties. At one stage, these two huge fires were going to merge. If that happened there was no way they could be controlled and would have burned until they reached the seaboard.

Thus far, 25 people have died in the fires; thousands of homes and farming facilities have burned; over 1 billion animals and birds have been killed – some now face extinction.

In addition, the insurance bill could be as high as $3.5 billion. The Commonwealth government and state governments have set up rebuilding committees, and these have indicated that the full revival could take 10 years. A new $1.4 billion bushfire recovery fund has been created to help residents, businesses and farmers rebound from their devastating losses.

In typical Australian fashion, the nation has rallied together. Just as the fires were unprecedented, so too the national support has also been unprecedented.

Performing artists, tennis stars, Australian rule football teams participated in concerts and sporting events to raise funds. One live event of performing artists raised over $4 million. Big business, banks and many others have stood up, to support bushfire relief efforts.

Things are now more or less under control, however, it may take months to extinguish all the fires. The irony is that, over past days, some fires areas have turned into flood areas.

Meanwhile, the rebuild has started, and Australia is open for business.

The AFUO noted that its Kolyada campaign was intended to show support and reinforce that the Ukrainians are an integral part of the Australian community.

Stefan Romaniw is co-chair of the Australian Federation of Ukrainian Organizations and first vice-president of the Ukrainian World Congress.