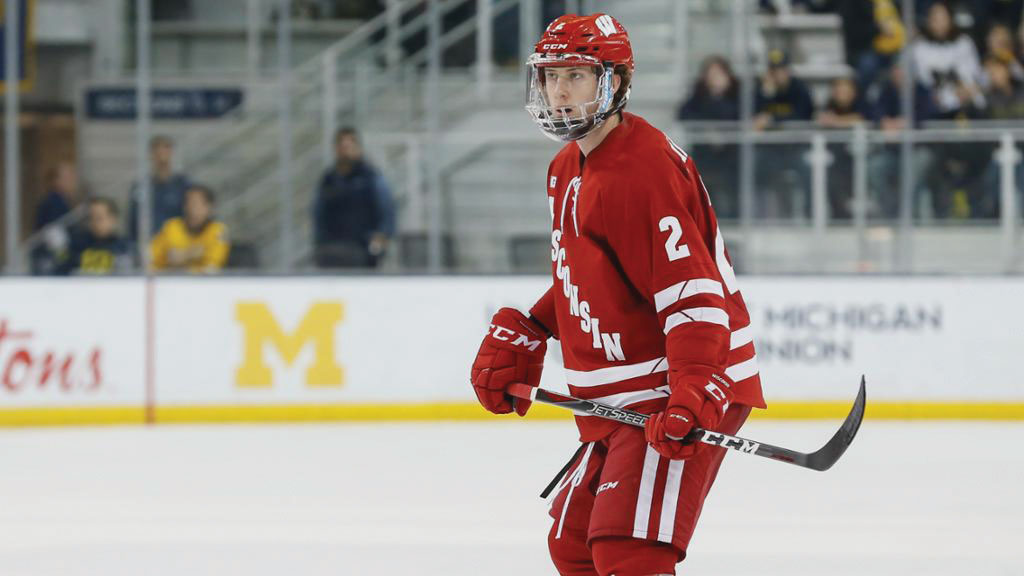 Wyatt Kalynuk, from his days as a University of Wisconsin Badger, is a prospect to the Philadelphia Flyers.

This explains the excitement brewing about Wyatt Kalynuk’s future. The young Ukrainian’s ceiling at the pro level has skyrocketed up the charts. He has been blessed with offensive abilities most defensemen don’t have, including confidence and a skating ability that opens up offensive opportunities, especially when eluding the first forechecker.

In the 2019-2020 season at the Univer­sity of Wisconsin, over 36 games the junior captain led the team in assists (21) and unassisted goals (3), was second in points (28) and shots (112), fifth in blocked shots (46). At development camp last summer, the 6-foot-1, 190-pound Kalynuk admitted skating was his top strength. He is quite advanced in that area and possesses the puck-moving skills the Flyers require for their hard-on-the-attack, pin-you-in-deep system.

Badgers head coach Tony Granato bestowed lofty responsibilities on his defensive star. Kalynuk received the most time on the power play, acting as the quarterback with the man advantage. At the same time, Wyatt plays a most solid, very responsible defensive game, taking care of his own end. He’s not the overpowering type who runs opponents over, but is strong positionally, intelligent and makes a great first pass.

Selected in the seventh round of the 2017 draft out of the United States Hockey League, Kalynuk has zoomed up to be the ninth-rated prospect in the Flyers system. In his draft year, his stock dropped due to the fact he physically had not grown into his body yet, translating into a weaker look against players his age. The commitment to working and training since then has allowed him to catch up physically with his on-ice skills.

The 23-year-old has the option of returning to Madison, Wis., for his senior year or signing an entry-level contract with Philadelphia and turning pro in 2020-2021, probably with Lehigh Valley in the American Hockey League. The Flyers own his rights until the summer of 2021.

Granato, who played and coached in the NHL, said it best when commenting about Kalynuk’s future in a March 2020 interview with NBCSports Philadelphia: “He has positioned himself to be very close to being ready for that opportunity. If he made the decision to come back to school, it would be great for our program and it’s not going to hurt his development. If the situation is right for him to leave, he’s in a really good spot to have a chance for a long career. I respect that and whichever way it turns out, I will be a big fan of Wyatt Kalynuk.”

It is noteworthy to mention Kalynuk was a preliminary nominee for the Hobey Baker Award, given to college hockey’s most outstanding player, for his performance in his sophomore and junior years.

Prospect Hamaliuk powering forward
Since Doug Wilson, Jr., took over as director of scouting in 2018 and assumed responsibilities for making their selections, San Jose’s draft philosophy has evolved into a willingness to select high-risk, high-reward players. It began in 2018 when they drafted Ryan Merkley 21st overall despite concerns about his attitude, and continued a year later with their second-round pick, Ukrainian Dillon Hamaliuk. The left winger was deemed a capable scorer with good size after his first two Western Hockey League seasons in Seattle, but a knee injury in December hurt his stock heading into the NHL several months later.

The Sharks, with inside knowledge about Hamaliuk, had him high on their want list despite the knee injury. They traded two third-round picks in the 2019 draft to New Jersey for the right to move up and pick Dillon 55th overall. The inside scoop was courtesy of Seattle’s assistant coach, Caston Sommer, the son of American Hockey League (AHL) San Jose Barracuda coach Roy Sommer, who offered a favorable scouting report on the 6-foot-3, 200-pounder. Hamaliuk received several formal interviews and a personal visit from the Sharks, leading up to their aggressive move up to select him in the second round.

The power forward, traded to Kelowna last summer, participated in the Sharks’ rookie and training camps before being reassigned back to the major junior. The scouting report describes Hamaliuk as having the natural instincts to play on the inside along with the hands and speed to play with skilled players. He plays on the top line and has net-front presence on the power play.

Barracuda Chmelevski a Shark in training
After impressing with six points in a combined 10 games (regular and playoff) in his professional debut with the AHL’s San Jose Barracuda in the spring of 2018, prospect Sasha Chmelevski followed up with a 75-point final junior season in 2018-2019. His 35 goals and 40 assists in 56 games were amplified by an impressive showing for the United States at the 2019 International Ice Hockey Federation World Junior Championship in Vancouver (second top scorer with 7 points in 7 games), and capped off by finishing second in Ontario Hockey League playoff scoring (31 points with 12 goals in 18 games) as his Ottawa 67’s lost in the championship series. 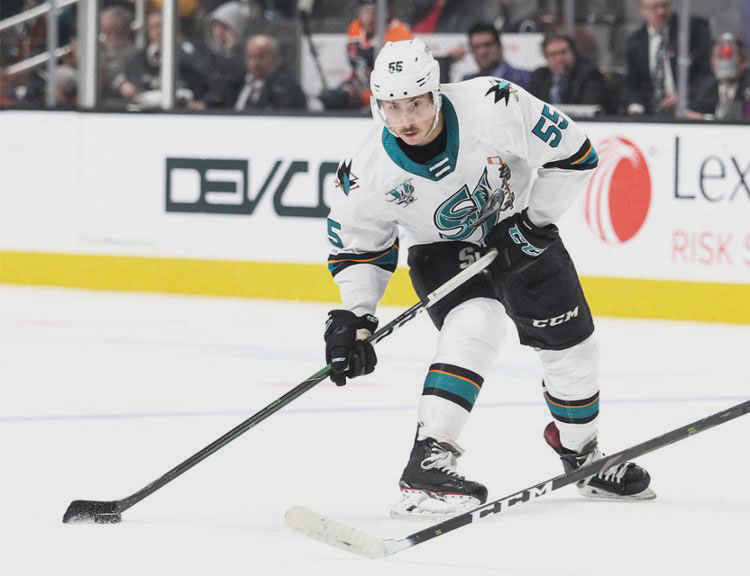 Alexander Chmelevski, suited up with the AHL’s San Jose Barracuda, is a prospect to the San Jose Sharks.

The 20-year-old turned pro heading into 2019-2020, choosing not to return to major junior as an overage player. Chmelevski’s ability to step up in crucial games along with his continued development makes him a potentially valuable prospect.

Here’s a brief scouting report on Alexander Chmelevski, from Huntington Beach, Calif.: Chmelevski possesses a well-rounded game with on-ice vision to set up teammates and a strong shot he uses early and often; he owns a high-end hockey IQ as proven by the multiple awards he won with Ottawa for his academic success; he admired ex-Red Wings great Pavel Datsyuk’s two-way game; and his biggest asset may be his competitiveness because he just hates to lose.

Up coming 2020-2021 season will see Chmelevski in the mix for a spot on the wing and at center – his versatility bodes well for his chances to make the Sharks. This year helped him establish himself at the professional level and should earn him a serious look soon. A salary cap-strapped San Jose organization in need of cost-controlled talent is another reason for Chmelevski to earn a spot with the parent club. Stat line with Barracuda this season: 42GP-11G-16A-27PTS-22PIM.