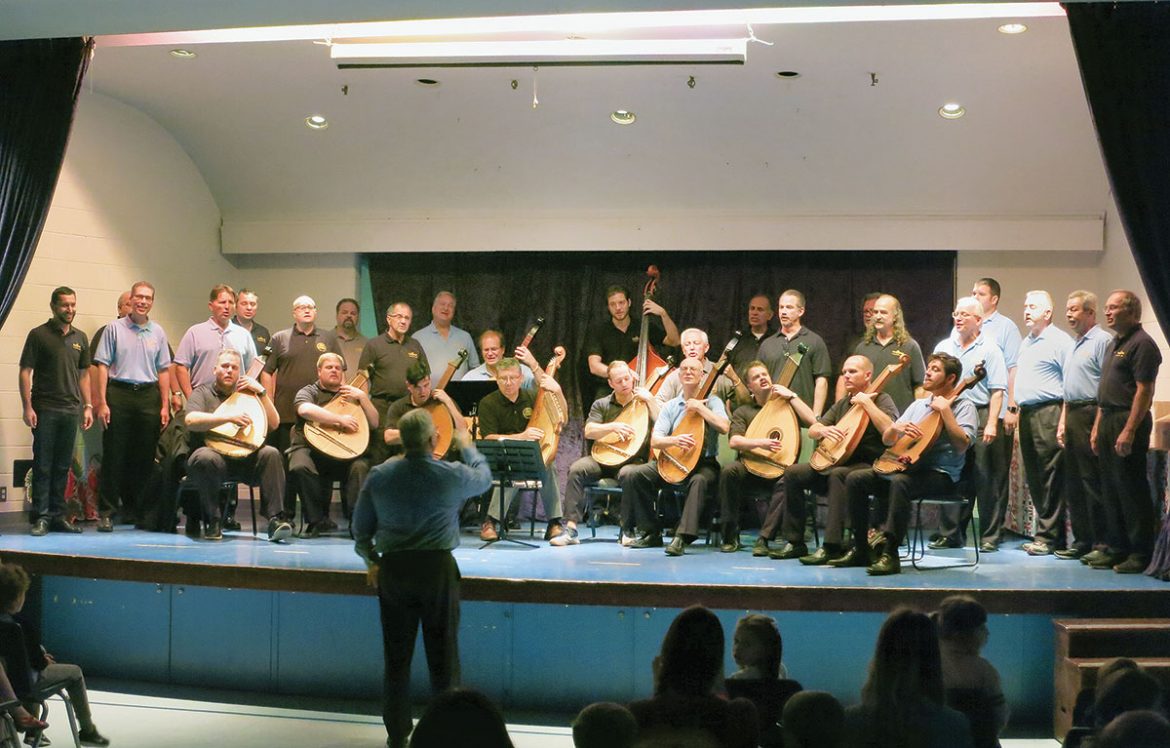 The Ukrainian Bandurist Chorus performs for the combined Ukrainian schools of Michigan.

This is the first part of a two-part series on the centennial concert on October 6 by the Ukrainian Bandurist Chorus in Detroit. This author was invited by the UBC to experience and document the weekend’s events, meet with individuals and provide an in-depth look at what it’s like for the UBC to play a hometown concert.

DETROIT – The Ukrainian Bandurist Chorus (UBC) performed its centennial concert tour in its adopted hometown of Detroit on October 6 at Max M. and Marjorie S. Fisher Music Center before an audience of nearly 400 people. (More about the concert and statements from local community members will appear in the follow-up article.)

Founded in Kyiv in 1918 by Vasyl Yemets, the UBC has called Detroit home for 70 years. Having performed in Ukraine in October 2018 – the second stop of the centennial concert tour – the UBC continues its mission of sharing the bandura and the traditions of the kobzari with a global audience. Detroit was the second-to-last stop on the centennial tour, with the final concert scheduled for November 10 at Koerner Hall in Toronto.

The day prior to the concert in Detroit, UBC members held an outreach program on Saturday, October 5, at Immaculate Conception Ukrainian Catholic Schools in Warren, Mich., with the combined Ukrainian schools of Ridna Shkola School of Ukrainian Language and Culture in Warren, Mich., and Lesia Ukrainka School for Religious and Ukrainian Studies at Pokrova (St. Mary the Protectress) Ukrainian Orthodox Cathedral in Southfield, Mich. 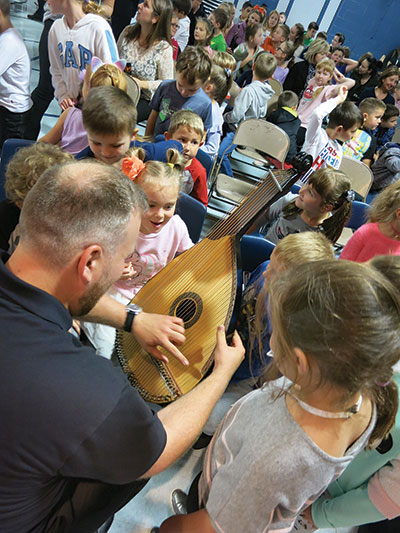 More than 200 students were welcomed by UBC director Oleh Mahlay, who gave a brief overview of the chorus’ 100-year history, highlighting the 70th anniversary of its roots in Detroit, the Kobzar traditions from the Kozak-era of Ukraine and how the UBC maintains that legacy, performing all over the world.

The chorus performed the lively “Play Kobzar!”, words by Taras Shevchenko, with music by Hryhory Kytasty, to warm applause from the students. They learned about how Ukrainian culture briefly experienced a period of Ukrainianization under the Soviets. The students were captivated silent during the song “Khmara.”

Mr. Mahlay continued his talk to the students by noting how the chorus’s members fled the Soviet Union to Germany and in 1949 arrived in the U.S.A., where bandura music could flourish beyond the borders of the Soviet Union. The chorus, he added, continues to inform the community at large, building on the work of the chorus’s predecessors. He underscored that the chorus had beaten the odds and near-extinction from Soviet terror to celebrate 100 years of existence.

The kobzar tradition, Mr. Mahlay said, was the keeper of historical records – though illiterate and blind, the kobzars sang songs to preserve their own history. He asked the children if they knew, “why are we here?” He then explained that the UBC was performing a concert in Detroit the next day, before the chorus sang the familiar folk song “Moyi Yaseny.”

Today, 101 years after the UBC’s founding, Mr. Mahlay explained, there remain four major bandura ensembles: the Kyiv Bandurist Capella (which also traces its roots to the capella formed by Mr. Yemets in 1918), the Ukrainian Bandurist Chorus, the Canadian Bandurist Capella and the Women’s Bandura Ensemble of North America.

Mykola Murskyj, a member of the UBC, its archivist and a graduate of the Ukrainian school in Detroit, related to the students his experience at Kobzarska Sich camp. Although he currently lives in Washington, D.C., Mr. Murskyj thanked the UBC for his time and experiences at camp, encouraging the students in the audience by stating that the camp is fun and that kids from all over the U.S.A. and Canada attend. There is a two-week bandura program and a one-week choral workshop. (More information can be found at banduracamp.org.)

The students then had an opportunity to hold, play and strum a bandura first-hand, under the guidance of UBC members.

Mr. Mahlay also encouraged the students to study bandura through the local instruction available from the Detroit School of Bandura for those age 9-10 and older. (More information can be obtained via e-mail, detroitbandura@gmail.com or 810-225-0608.)

For many, it is the enchanting sound of the instrument that draws people in.  Bandura camps for the summer of 2020 include: Bandura at Bobriwka in Colebrook, Conn., (June 27 through July 4, ikykuzma@gmail.com), ODUM Bandura Camp at Dibrova in Brighton, Mich., (July 5-12, odumcamps@gamil.com or www.odum.org), Kobzarska Sich in Emlenton, Pa., (August 1-15, admin@banduracamp.org or www.banduracamp.org), and Litnia Zustrich Bandura Camp in Hawkestone, Ontario, (August 16-23, zustrichbanduracamp@gmail.com).

Olga Novatchinski, director of the Ukrainian school in Warren, thanked Mr. Mahlay and the UBC members for donating their time and wished them a successful concert tour. Ms. Novatchinski also greeted and thanked the students from the Lesia Ukrainka school for coming to Warren.

Mr. Mahlay reminded the students – “the Bandura is ours!” (Bandura ye nasha!) – it is uniquely Ukrainian.

As an encore, the UBC members wished the Ukrainian schools and their students many more years with their rendition of “Mnohaya Lita.”