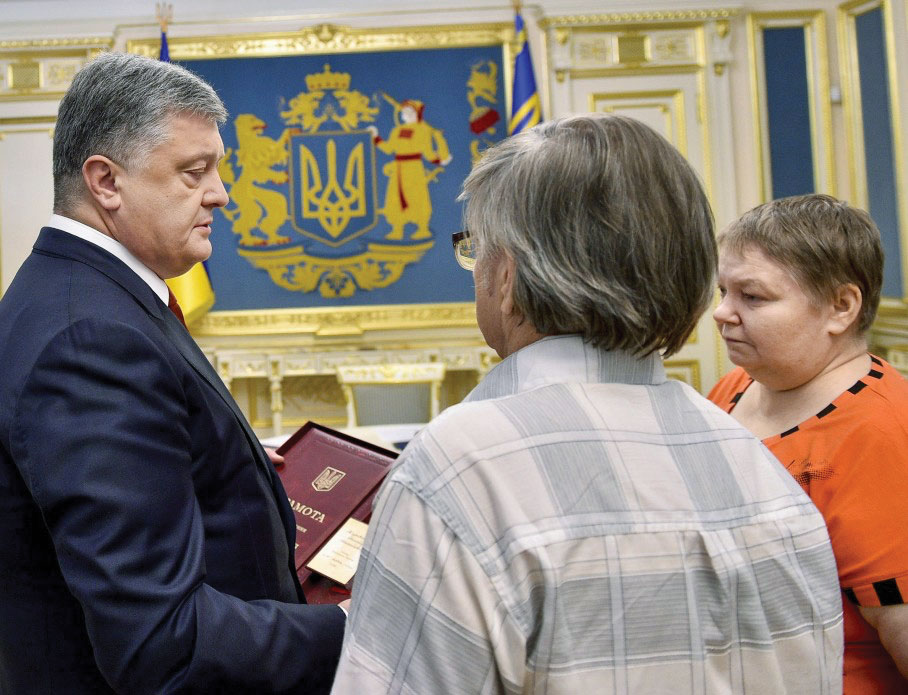 Ukrainian President Petro Poroshenko presents the Hero of Ukraine medal to the parents of Mikhail Zhyzneuski in Kyiv on June 13.

KYIV – A Belarusian man who was one of the first protesters killed during the Euro-Maidan protests in Kyiv in 2014 has been posthumously awarded a Hero of Ukraine medal.

President Petro Poroshenko handed the medal to Mikhail Zhyzneuski’s parents in Kyiv on June 13, making him the first foreigner awarded the high honor.

Mr. Poroshenko thanked the parents for raising a man he hailed as “a hero who was a great Belarusian and a great Ukrainian in his heart.”

“He gave his life for our and your liberty,” the president said at the ceremony.

The protests erupted late in 2013, after President Viktor Yanukovych scrapped plans for a landmark pact with the European Union and vowed to strengthen trade ties with Russia instead.

Zhyzneuski and another protester Serhiy Nihoyan, a Ukrainian of Armenian origin, were shot dead in central Kyiv on January 22, 2014.

As the number of protesters shot by snipers or killed in clashes with police grew, the victims became known as the Heavenly Hundred, or the Heavenly Brigade.

Nina Zhyzneuskaya told RFE/RL that the Ukrainian state award was important to her and her husband, and gave them a sense of “closure.”