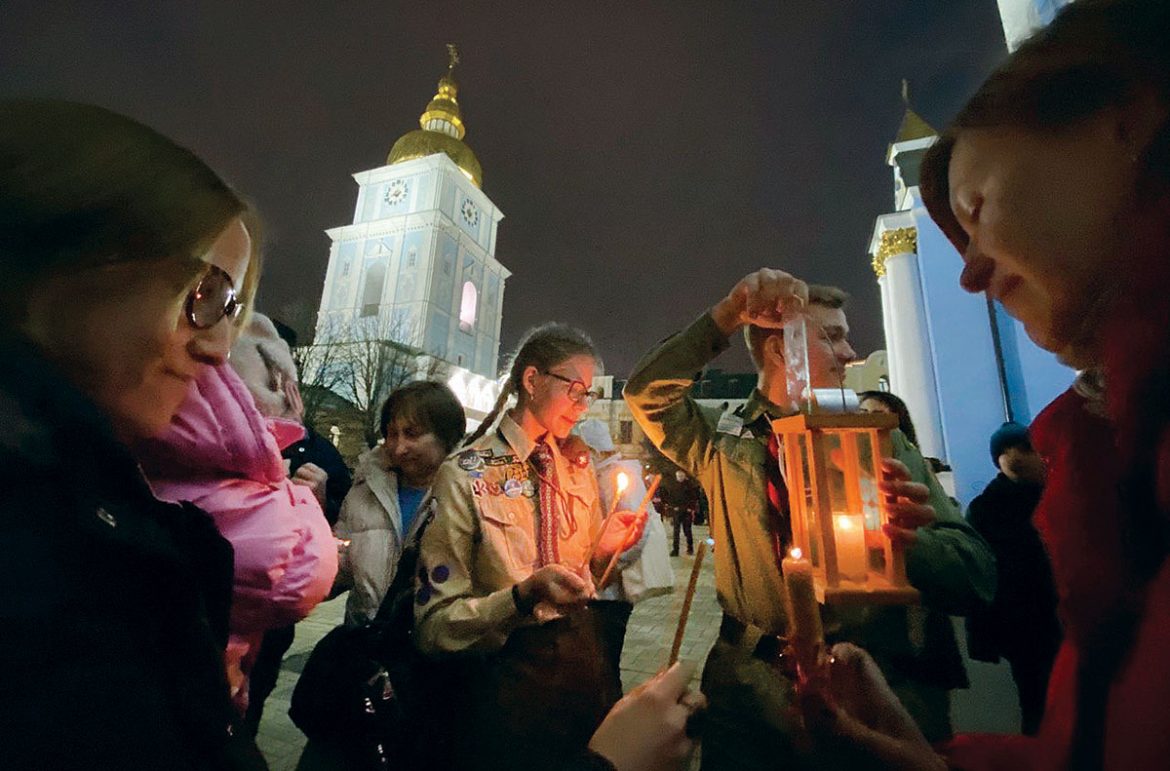 KYIV – Every year in December, members of Plast National Scout Organization of Ukraine come to Vienna to join dozens of Europe’s scout organizations in one of Austria’s massive cathedrals. The international community gathers there to be among first in Europe who receive the Bethlehem Peace Light, a symbolic fire lit at Jesus’s birthplace at the Grotto of the Church of the Nativity in Bethlehem.

From that Viennese church, this light of good will and peace spreads all around Europe and beyond. A few hours after Plast’s representative had received the symbolic light on December 14, the candle with the Bethlehem Peace Light was flown into Kyiv. It was presented to the public in St. Michael’s Golden-Domed Monastery, one of the central churches in Ukraine’s capital, on December 15.

The person who is the primary Ukrainian carrier of the Peace Light this year is Viacheslav Fietisov, Plast’s international secretary. “In Vienna, the ceremony occurred this year in St. Leopold’s Cathedral. It traditionally starts with a prayer, opening remarks and the official song of the Peace Light of Bethlehem,” Mr. Fietisov explained. “Every national scout delegation should prepare three representatives who will be involved in the ceremony. Each of them has a specific role: the first representative holds a national flag, the second one gives a speech and the last representative carries a special candle with the Peace Light. So, the representatives of all scout delegations present follow this procedure one by one. According to the scout tradition, people from different countries exchange scout scarves with each other. This event is a great opportunity to establish new contacts and to continue the wonderful tradition of sharing the Peace Light.”

Right after the ceremony in Austria concluded, Mr. Fietisov hurried onto a plane and flew to Kyiv to bring the symbolic light to the capital’s city center. The starting point of the Bethlehem Peace Light’s journey throughout Ukraine was a ceremony at the St. Michael’s Golden-Domed Monastery.

“Ukrainian scouts formed the corridor in the cathedral, holding burning candles lit from the Peace Light. Plast scouts from other regions passed through this corridor to obtain the light. After a speech by the scouts’ branch coordinator about the meaning of this symbolical fire, it was shared with all the people in the cathedral,” related Mr. Fietisov, who is the chief coordinator of this year’s Peace Light ceremonies.

This Plast campaign not only spreads the symbolic Peace Light among scouts, their families and the public, but it also has meaning for society at large. “We bring the Peace Light to hospitals, government bodies, churches, schools, universities, companies, etc. There are two missions: to encourage people to think about peace and unity once again and to do a good deed. For example, when scouts bring this fire to hospitals and orphanages, they also bring a gift of some clothing or food for those who need it. This tradition creates the [appropriate] atmosphere before Christmastime and makes this period the warmest and the most festive of the year,” Mr. Fietisov commented.

One of the essential parts of the Bethlehem Peace Light campaign is to bring this symbol of peace and good will to the place where it is needed the most – to Ukrainian soldiers at the eastern frontline. Plast members have now shared this light for 23 years in a row, but the meaning of the Peace Light was dramatically transformed in 2014, when Russia occupied Crimea and parts of the Donetsk and Luhansk regions. From that time on, Plast scouts have visited Ukrainian soldiers in the east to try to raise their spirits.

“It all started with the war. My Plast friend Roman Oryshchenko now says that it was I who suggested in 2014 to go to the Donbas and bring the Peace Light of Bethlehem to Ukrainian soldiers, although I do not recall this particular moment. But it definitely was from that time that we started to carry this symbolic light to the frontline,” said Oleh Vdoviak, coordinator of the project, as he shared his memories about the beginning of this tradition. “We are duty-bound to continue this tradition every year, and each time we hope it will be our last trip to the borderline of the occupied territories. But the war is on, so we have to go.”

In addition to the symbolic Bethlehem Peace Light, volunteers always bring with them Christmas gifts and other relevant items. Five years ago, these were armor, shoes, first aid kits, military uniforms, and other necessities. Fortunately, this is no longer needed, so now they buy sweets, and collect letters of support for the soldiers on the frontline.

“There are also inspirational things to which the Peace Light of Bethlehem is directly related. For example, the ceremony of receiving the light became the first event for the Plast group in Bakhmut [Donetsk region],” Mr. Vdoviak recalled. “When we arrived there in 2016, there was an initiative group of residents who shared our values, including people from the volunteer environment who helped the army. They realized that Donbas towns lacked the patriotic upbringing of young people, and particularly Plast. Since then, the environment has been evolving quickly – last summer they held a presentation about Plast in the city, and the room was completely filled with people who wanted to learn more about the Ukrainian scouts.”

“Each trip is unique. In the first years (2014-2016), the frontline was changing so fast that, during the day, flags at the checkpoints and territory control could change. It was a bit dangerous to travel like this, but the Peace Light was illuminating our way,” Mr. Vdoviak said.

Once Ukrainian soldiers found out that Mr. Vdoviak and his volunteer group were coming with the Peace Light to their area, they called and asked to visit. The place where these soldiers were serving was just a few hundred meters from the positions of anti-Ukrainian militants. “It was getting dark outside when we were in the center of a village. We went into a shop to drink tea and, at that moment, terrorists started artillery fire on our positions – the exact ones where the guys were waiting for us and the light. We waited until it was relatively safe and drove to them. We met, talked, presented some food to them, drank tea. I still keep in touch with one of those guys,” Mr. Vdoviak related.

“We always come to the ‘Plast battalion,’ where most of the Plast members served,” he continued. “It’s always a warm evening with guitar music, UPA [Ukrainian Insurgent Army] songs, hot tea or coffee, homemade gingerbread made by volunteers and, of course, with the Peace Light of Bethlehem.”