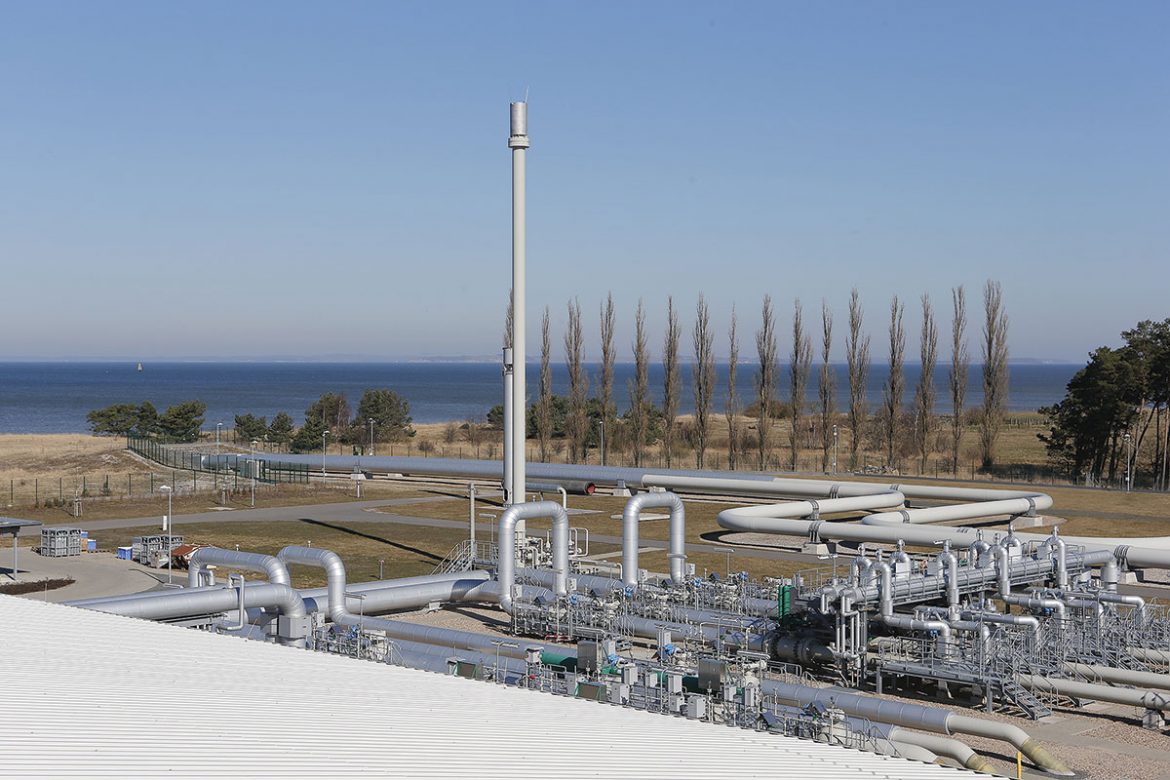 The terminating point of the Nord Stream Pipeline is located at the energy hub Lubminer Heide near Greifswald, Germany, which covers an area of about 12 hectares, including the receiving terminal of the connecting pipelines OPAL and NEL.

KYIV – U.S. President Joe Biden has defended the lifting of sanctions on the company that controls the Nord Stream 2 (NS2) natural gas pipeline whose completion will effectively eliminate Ukraine as a vital energy transit country and leave it vulnerable to additional Russian aggression.

He justified the national-security waiver on Swiss-registered Nord Stream 2 AG, whose ultimate owner is Russian state-owned gas titan Gazprom, saying the 1,230-kilometer pipeline was nearly completed by the time he took office.

Speaking to White House reporters on May 25, Mr. Biden said it would “be counterproductive in terms of our European relations and I hope we can work on how they handle it from this point on.”

The underwater pipeline will link Russia to Germany under the Baltic Sea and is 95 percent complete. The previous U.S. presidential administration of Donald Trump imposed sanctions on companies involved in the large-scale project in December 2019, after which ships bearing flags of European Union (EU) countries had stopped work on the pipeline. Laying of pipes resumed in January.

Thirteen Russian vessels involved in the pipe-laying project are still facing restrictive measures, the U.S. Treasury Department announced on May 21. The chief executive of the consortium company is exempt from sanctions.

The group of companies pushing for the project’s completion, at the head of which is Gazprom and Germany’s Uniper, are Wintershall Dea, a unit of BASF, Anglo-Dutch Shell, Austria’s OMV and French-based Engie.

The U.S. has cited the danger of increased EU reliance on Russian energy supplies, as have EU countries France, Poland and the three Baltic countries of Estonia, Lithuania and Latvia.

Once completed, NS2 will double the capacity of the first Nord Stream pipeline to 110 billion cubic meters of gas yearly and allow Russia to bypass Ukraine as a conduit for supplies to its EU neighbors.

In an interview to local media on May 18, he said that a shortage of $2 billion-$3 billion will derive from lost Russian gas transit revenues and the remaining amount from more expensive transit fees from Germany.

To its advantage, Ukraine has large facilities – mostly in the western part of the country – that it uses to store gas purchases during the non-peak winter months. Yet Russia’s pursuit of another project, Turkstream, and the second Nord Stream pipeline have deprived Kyiv of gas transit flows.

Since Kyiv will be deprived of its geopolitical leverage as a strategic gas transit country, it will be further exposed to Russian belligerence, Col. Kyrylo Budanov, chief of Defense Intelligence of Ukraine, told the Financial Times in a rare interview.

“The existing Ukrainian gas pipeline not only performs a transport function, but also acts as a protection for Ukraine from possible aggression by the Russian Federation,” he said on May 21. “At the same time, for Russia, Nord Stream 2 is only a tool for manipulating and achieving dominance in Europe.”

Ukrainian President Volodymyr Zelenskyy at a news conference in Kyiv on May 20 said the completion of NS2 would be “a personal loss” for Mr. Biden and a “serious political victory” for Moscow.

The presidents of the U.S. and Russia are scheduled to meet in the Swiss city of Geneva on June 16 to discuss a variety of issues, including the ongoing war in eastern Ukraine that Russia has waged since April 2014 after illegally annexing the Crimean Peninsula, killing more than 14,000 people.

Germany has also promised to discuss the issue of maintaining gas flows through Ukraine with Russia for diversifying the continent’s energy flows and not leave Ukraine exposed. Those talks that have yet to begin.

Mr. Biden’s sanctions waiver prompted Ukraine’s legislature to call on the U.S. Congress to reverse Mr. Biden’s decision and keep them in place.

The Verkhovna Rada urged Congress to “use all available tools provided by U.S. law to completely and irreversibly stop the construction of the Nord Stream 2 gas pipeline by applying blocking sanctions against all participants in this Russian geopolitical project, including Nord Stream 2 AG,” state-run news agency Ukrinform reported on May 21.
In turn, Senate Republicans introduced legislation on May 25 that would re-impose sanctions and reverse Mr. Biden’s decision.

Sen. Kevin Cramer (R-N.D.) said the administration was “acquiescing to a misguided German strategy which will give [Vladimir] Putin a grip on our allies in Europe.”
Harsher criticism came from Ukraine observers.

Yale historian Timothy Snyder, who has written extensively about the country, said on Twitter that “it was always an outrage to reward Russia with a pipeline for invading Ukraine.”

Former Estonian President Toomas Hendrik Ilves, who led the country during a crippling Russian cyberattack in 2007, said that a Germany government spokesperson was against selling Kyiv arms, yet “it will, however, continue a deal with Russia and a Russian company…to build Nord Stream 2 that significantly harms Ukraine. They are screwing Ukraine twice over. Are Ukrainians… um… lesser humans?”