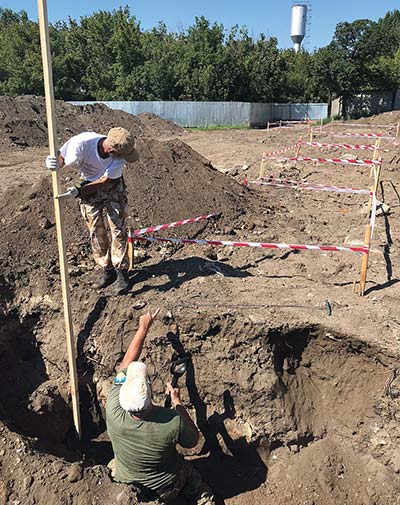 Odesa historian Oleksandr Babich (top) works to excavate a mass grave site that was discovered on the outskirts of Odesa in August.

Oleksandr Babich’s Facebook post on August 20 slowly gained traction as he joined a team of researchers to measure the metes and bounds of the discovery situated southwest of the city where metal garages were slated to be relocated amid an expansion of the airport on the outskirts of the city.

Approximately 8,500 victims shot by the Soviet-era NKVD – the predecessor of the internal security and counterintelligence agency of the KGB – are believed to be buried at the site, Mr. Babich told The Ukrainian Weekly over the phone.

The Kyiv-based Ukrainian Institute of National Memory confirmed the discovery two days later saying it is one the biggest “mass graves” from the Soviet era found in recent history.

Mr. Babich, who heads two nonprofits called Odessa City Tours and Society and Historical Heritage, quipped that he has now become an expert on “Soviet terror.” The work for the two nonprofits involves giving historical tours or showing tourists catacombs in the city where Soviet partisans resisted the Nazi German-led occupation during World War II.

Preparations for exhumation at the 4.7-hectare (11.6-acre) site have commenced, he said, and bullet shell casings, human bones, Soviet coins and clothing buttons from that period have already been uncovered. Mr. Babich added that much work remains to examine the discovery, because “the [shot] bodies were buried at a garbage dump site.”

There is no consensus on the exact number of Soviet citizens who became victims of Stalin’s Great Terror.

“According to the Memorial Human Rights Center in Moscow, at least 12 million innocent people were jailed or executed in the Soviet Union between the 1930s and 1950s,” Radio Free Europe/Radio Liberty reported.

Another historian at Arc.UA, Oleksandr Kiryakov, said the millions of arbitrary arrests and killings were made through “Stalin’s doctrine of big revolution and class warfare” at a time when the Soviet leadership learned they “couldn’t build a communist utopia.”

So, members of the intelligentsia – educated and well-off people such as engineers, teachers, artists, “basically the bourgeoisie,” Mr. Kiryakov said, were targeted.

The wave of killings also included die-hard communists and fellow NKVD officers, added Mr. Mahdych, which is why the Great Terror is also known as the Great Purge. Even the best individuals and the top brass of the Soviet military were also sent to prisons or killed.

According to Mr. Mahdych, in Ukraine alone every “other Ukrainian citizen of the [Soviet] republic arrested during the Great Terror was shot to death.”

He provided figures which show that in the first of two years of the purge, 779,700 people in Ukraine were arrested either “for counterrevolutionary activity … or treason, of whom 353,540 were shot [to] death.”

The figures are disproportionate since, at the time, Ukraine’s estimated population of 31 million comprised nearly 18 percent of the USSR’s population.

To illustrate the extent of repression in the Communist Party ranks, he said that 10 of the 11 members of Ukraine’s Politburo “were shot in 1937-1938.”

Even the head of the NKVD secret police, Nikolay Yezhov, was shot to death in 1940 before being replaced by Lavrentiy Beria. He, in turn, would be tried for treason and shot and executed in 1953.

In Odesa, given the city’s pre-Soviet cosmopolitan population during the Tsarist era, Mr. Babich said many people were targeted for having last names that did not sound Slavic.

Although “the majority of victims were Ukrainian by ethnicity…, the NKVD would target people with German, Bulgarian or Romanian surnames,” the Odesa historian said.

Mr. Babich first learned of the site while researching state archives in Romania while painstakingly “using a dictionary to translate” documents.

As an ally of Nazi Germany during WW II, Romania had sought to understand what happened to its prisoners when the Soviets re-took the city. Mr. Babich said the Romanians were shot in 1942-1943. He also found accounts “from 21 eyewitnesses” dating to the 1960s-1970s who had discovered human remains at the site “but who were told by the KGB ‘that you didn’t see anything.’”

The biggest site to date of NKVD victims in Ukraine is the Bykivnya grave in Kyiv in what is now the Dnipro municipal administrative district located on the eastern bank of the Dnipro River.

Named after the then-village Bykivnya, there are up to 100,000 people who were buried there, according to Mr. Mahdych, the historian.

The next largest is a site in west-central Vinnytsia Oblast where 91 mass graves were discovered. Researchers said that 9,439 people were found shot at that site. In total, about 20,000 people were murdered by Soviet authorities in the region in 1937-1938.

More than 4,309 Polish citizens, of whom 3,809 were military officers and 500 civilians, were killed in March 1940 and buried in Kharkiv in what was then the rural town of Pyatykhatky. In the preceding two years, 2,746 Soviet citizens were killed and buried there.

The invading German army found an NKVD burial site of more than 500 people shot to death in Donetsk in the autumn of 1941. More than 2,000 people who were shot and killed in Luhansk in easternmost Ukraine were discovered in the early 1990s.

A mass grave with 200 bodies was found in central Poltava Oblast in the 1980s. More than 500 bodies from an NKVD prison were identified in western Ivano-Frankivsk Oblast.  Those individuals were shot in the summer of 1941.

In Lviv, in a prison that had been used by Poles, Germans and the Soviets, more than 1,000 victims were found.  They were shot in June 1941 when the Red Army invaded western Ukraine. In 1990, 486 human remains from the Soviet era were identified in Drohobych.

And in the central Cherkassy regional city of Uman, 1,402 people were murdered by the NKVD; their bodies were found buried in a mass grave.

Overall, the Gulag History Museum in Moscow said the number of people who perished under the Soviet regime was around 20 million, of whom more than 1 million were executed.