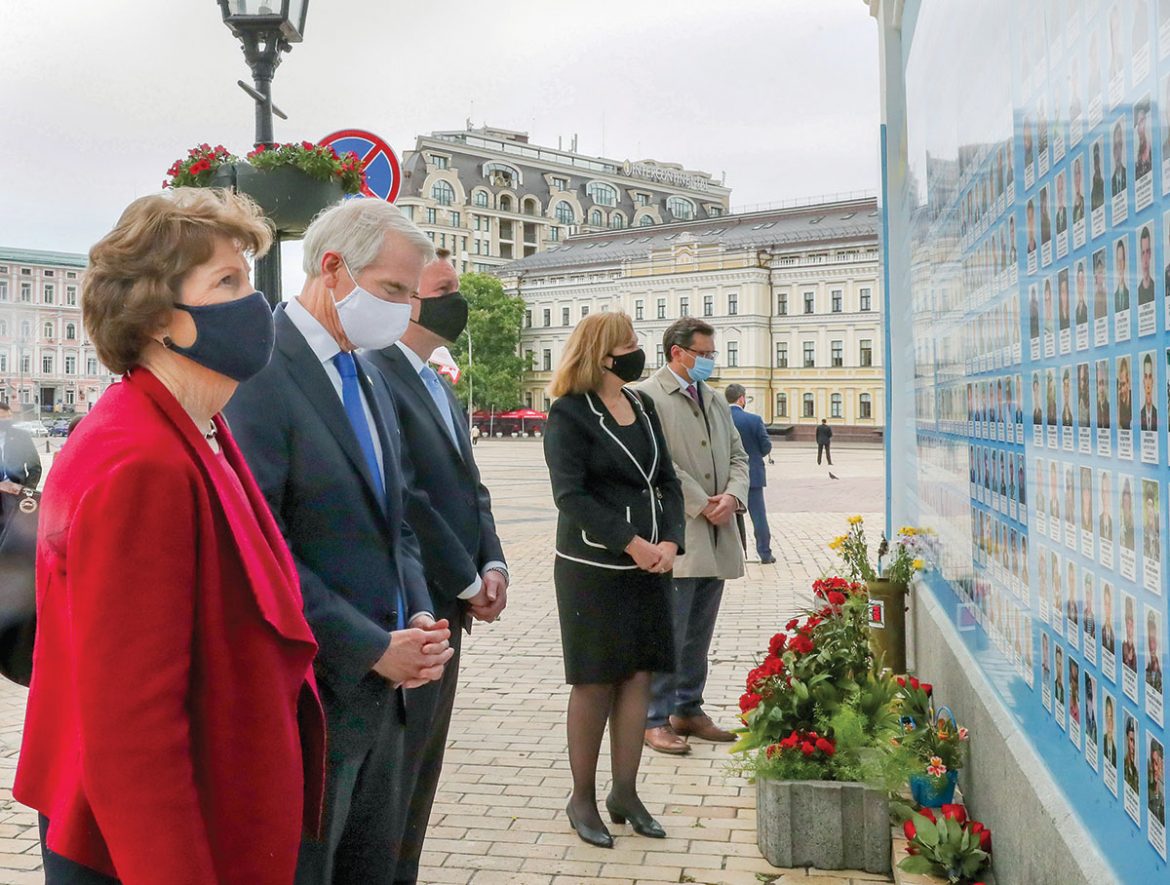 U.S. Sen. Rob Portman (R-Ohio), senior member of the Foreign Relations Committee and co-chair of the Senate Ukraine Caucus, and Sens. Jeanne Shaheen (D-N.H.) and Chris Murphy (D-Conn.), both of whom sit on the same committee, arrived for a one-day visit.

Their main message during a cloudy day was for Kyiv to forge ahead with strengthening democratic institutions and clamp down on corruption, reduce the influence of oligarchs and reinforce Washington’s assistance with containing Russian aggression.

“Ensuring Ukraine continues key reforms to strengthen its democracy is critical to our enduring partnership and to counter Russian aggression,” Ms. Shaheen said. “[I] appreciated meeting with government representatives and civil society members on their work to root out corruption and build a better tomorrow for Ukraine.”

In a separate joint statement, the three senators said: “The purpose of this delegation’s mission is to show U.S. solidarity with Ukraine against Russian aggression and its right to sovereignty and territorial integrity, as well as encourage progress on democratic reforms.”

Regarding the underwater Russian pipeline project that will link with Germany later this year, Ms. Shaheen said: “We continue to look for ways to counter the completion of Nord Stream 2 and the launch of the pipeline. There will be several other factors that will affect the completion.”

U.S. President Joe Biden last month signed off on sanction waivers on the Russian-controlled company that is managing the pipeline’s construction, which is already 95 percent complete.

On May 25, Rep. James Risch (R-Idaho) and Sen. Michael McCaul (R-Texas) wrote an open letter to Secretary of State Antony Blinken expressing disagreement with the Biden administration “that it is in the national interests of the United States to issue this waiver, as it will further enable Russian leverage over European allies’ energy supply.”

Once completed, the pipeline will eliminate Ukraine as a strategic natural-gas supplier to Europe and further expose Kyiv to ongoing Russian military threats.

Under a five-year deal with Ukraine, Russian state-owned Gazprom has agreed to ship 40 billion cubic meters a year of natural gas via Ukraine in 2021-2024 with a ship-or-pay clause.

In his meeting with the lawmakers on Bankova Street, President Volodymyr Zelenskyy said that the project “will disconnect Ukraine from gas supplies, which means disconnecting us from at least $3 billion a year [of transit fees]. … We will have nothing to pay for the Ukrainian army.”

In a tweet after landing in Ukraine’s capital, Ms. Shaheen also voiced support for Kyiv’s goal to join the European Union and NATO.

Kyiv has decried not being invited to the June 14 NATO summit in Brussels and for the lack of progress in its “open door” policy for membership.

“We understand the desire of the allies to hold a closed summit … but we do not understand how it is possible not to invite Ukraine,” Ukrainian Foreign Affairs Minister Dmytro Kuleba said on May 26 as reported by Reuters, adding that the summit comes amid escalating tension on the Ukrainian-Russian border.

The same topics of reforms, corruption and Russian aggression were covered in separate meetings with Mr. Kuleba and Prime Minister Denys Shmyhal, the joint statement by the senators said.

“As Ukraine continues to counter Russian aggression and implement significant reforms, the long-standing bipartisan and bicameral support in the U.S. Congress is vital to our strategic partnership,” Mr. Kuleba said.

He took them on a brief walking tour in Kyiv where they visited a memorial wall dedicated to Ukrainian soldiers killed in the Donbas war that Russia has waged since 2014 in the two easternmost regions of Luhansk and Donetsk.

Twenty-three Ukrainian military personnel have been killed and 12 wounded from sniper fire since July 27 when the latest ceasefire took effect, though it never took hold.

In May, six Ukrainian soldiers were killed and officials say about 14,000 have been killed since the start of the war, although the United Nations says the figure is more than 13,000.

Ukraine expects to have three more vessels of the same class by the end of this year and already has two. Two of the vessels being built in the Chesapeake Bay already have names: Sumy and Fastiv.

On graft, Ukraine on June 1 passed a revamped law on corruption whistleblowers that Mr. Zelenskyy had vetoed in February.

According to the new version, conditions for reporting information about corruption “provides that state bodies, local authorities, legal entities of public law are obliged to ensure the functioning of internal channels for reporting possible facts of corruption or corruption-related offenses,” Interfax reported.

“MPs [members of parliament] have streamlined some issues on protecting whistleblowers…One of the defining changes will be the creation of a Unified Portal for whistleblowers’ notices which TI Ukraine also considered necessary,” the non-profit said.

A day after the senators departed, the Verkhovna Rada published the president’s much touted proposed bill on reducing the influence of oligarchs.

It envisions the creation of a database of individuals who meet three of four criteria who will be subject to certain requirements.

Its main goal is to curb the reach of the ultra-rich caste in the economic, political and media sectors of Ukrainian society.

The National Security and Defense Council would designate who is an “oligarch” if they have significant influence over the media, participate directly in politics or through financing of a political party or politicians, have ultimate ownership of a monopoly and have assets that exceed 2.3 billion hryvnias ($83 million).

As such, they will be prohibited from making political contributions, take part in large-scale privatization of state assets and will be required to file asset declarations.

Likewise, designated individuals will have to report any interaction with a public official.
In its raw form, the bill’s constitutionality is currently being debated among analytical centers and lawmakers.