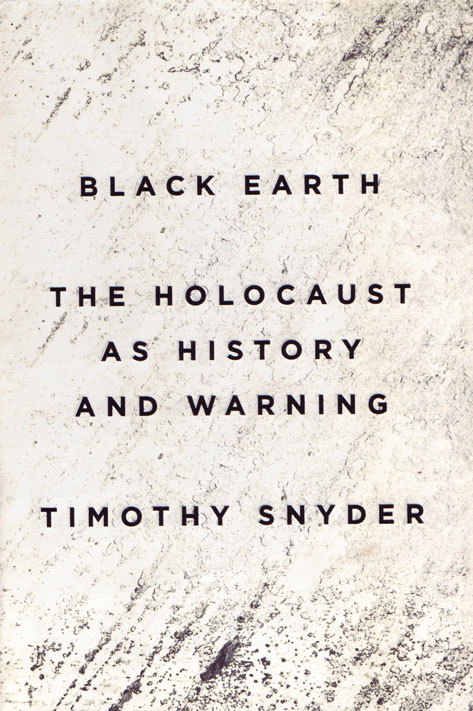 Prof. Timothy Snyder, the Housum Professor of History at Yale University, this year released his ninth book – “Black Earth: The Holocaust as History and Warning.”

Based on new archival sources from Eastern Europe, Prof. Snyder examines the Holocaust in vast detail, describing Hitler’s worldview of the Jews and their planned extermination by the Nazis that began in the territories of the Soviet Union.

Attention to Ukraine is paid by Prof. Snyder in examining how Hitler attacked the USSR, and how German police and soldiers, with the cooperation of the local people, conducted mass killings of Jews.

The first half of the book explains how the Jews were killed, while the second half describes how Jews survived, including rescuers, whom Prof. Snyder calls the “righteous few.” The author suggests that, as states were destroyed, Jews could be murdered there, because Hitler created an environment where no structure supported virtue.

The publisher notes: “ ‘Black Earth’ concludes with the chilling prospect that we have misunderstood the Holocaust and the essential lessons it should have taught us. If the Holocaust was indeed, as Prof. Snyder’s carefully constructed argument demonstrates, a result of ecological panic and state destruction, then our misunderstanding of it has endangered our own future. The world of the early 21st century resembles the world of the early 20th more than we realize – and some of our own sensibilities are closer to those of Europeans of the 1930s than we might like to think. As Prof. Snyder explains, we cannot afford to confine the Holocaust to museums and memory. If we do not understand the lessons of the Holocaust, an unprecedented crime could become a precedent for the future.”

The book received praise from Zbigniew Brzezinski, who wrote, “Timothy Snyder’s ‘Black Earth’ is not only a powerful exposure of the horrors of the Holocaust but also a compelling dissection of the Holocaust’s continuing threat.”

Anne Applebaum commented: “In this unusual and innovative book, Timothy Snyder takes a fresh look at the intellectual origins of the Holocaust, placing Hitler’s genocide firmly in the politics and diplomacy of 1930s Europe. ‘Black Earth’ is required reading for anyone who cares about this difficult period of history.”

Prof. Snyder is a member of the Committee on Conscience of the U.S. Holocaust Memorial Museum. Other books to his credit include the award-winning “Bloodlands: Europe Between Hitler and Stalin.”

Readers can obtain copies of the book from the publisher, Tim Duggan Books, www.crownpublishing,com or from online booksellers such as amazon.com, as well as local retailers. It is available as an e-book for $14.99.