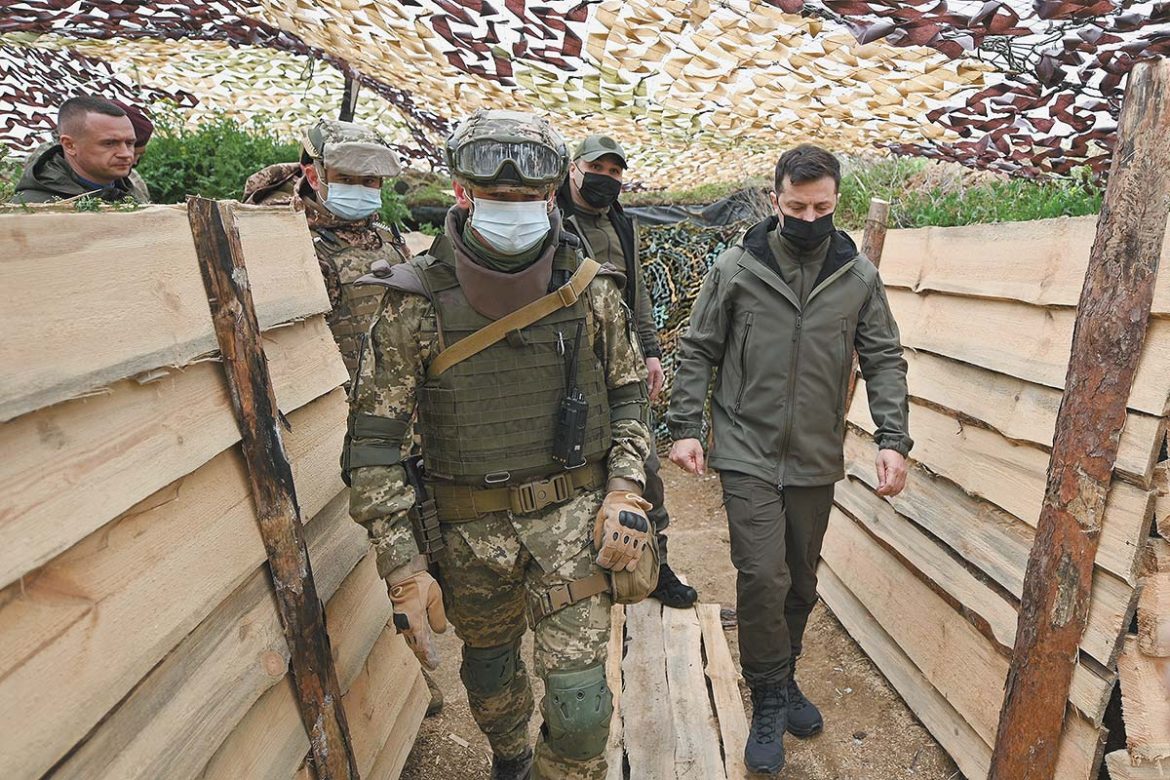 KYIV – A secretive Russian military intelligence unit has been implicated in a series of explosions at munitions depots in Bulgaria and the Czech Republic as part of a long-term clandestine operation to cripple the supply of weapons for Ukraine’s war effort.

A spokeswoman for the Bulgarian Prosecutor-General’s Office, Silka Mileva, said on April 28 that six Russian nationals are being investigated for their alleged role in blasts at four weapons and armament facilities between 2011 and 2020, Radio Free Europe/Radio Liberty reported in Sofia.

She said the “purpose of the actions of the Russian citizens was to cut off the supply of special products to Georgia and Ukraine.”

Three Russian suspects who are “most likely” agents of the Russian military intelligence directorate (GRU) are also sought over two poisoning attempts of Bulgarian arms trader Emilian Gebrev, who has sold millions of dollars’ worth of weapons to Ukraine in the past, Ms. Mileva added.

The news follows a report from two days earlier by open-source research group Bellingcat that linked the GRU unit to sabotage and assassination operations in Bulgaria and the Czech Republic that was part of an effort “to undermine Ukraine” during the first two years of an undeclared war with Russia in 2014-2015, Bellingcat said.

Earlier this month, Czech authorities announced they are seeking at least two officers of GRU unit 29155 for their alleged connection to two explosions at arms depots in the eastern part of the country in 2014.

Mr. Gebrev, the Bulgarian weapons manufacturer, had arms stored at one of the depots at the time of the blasts. 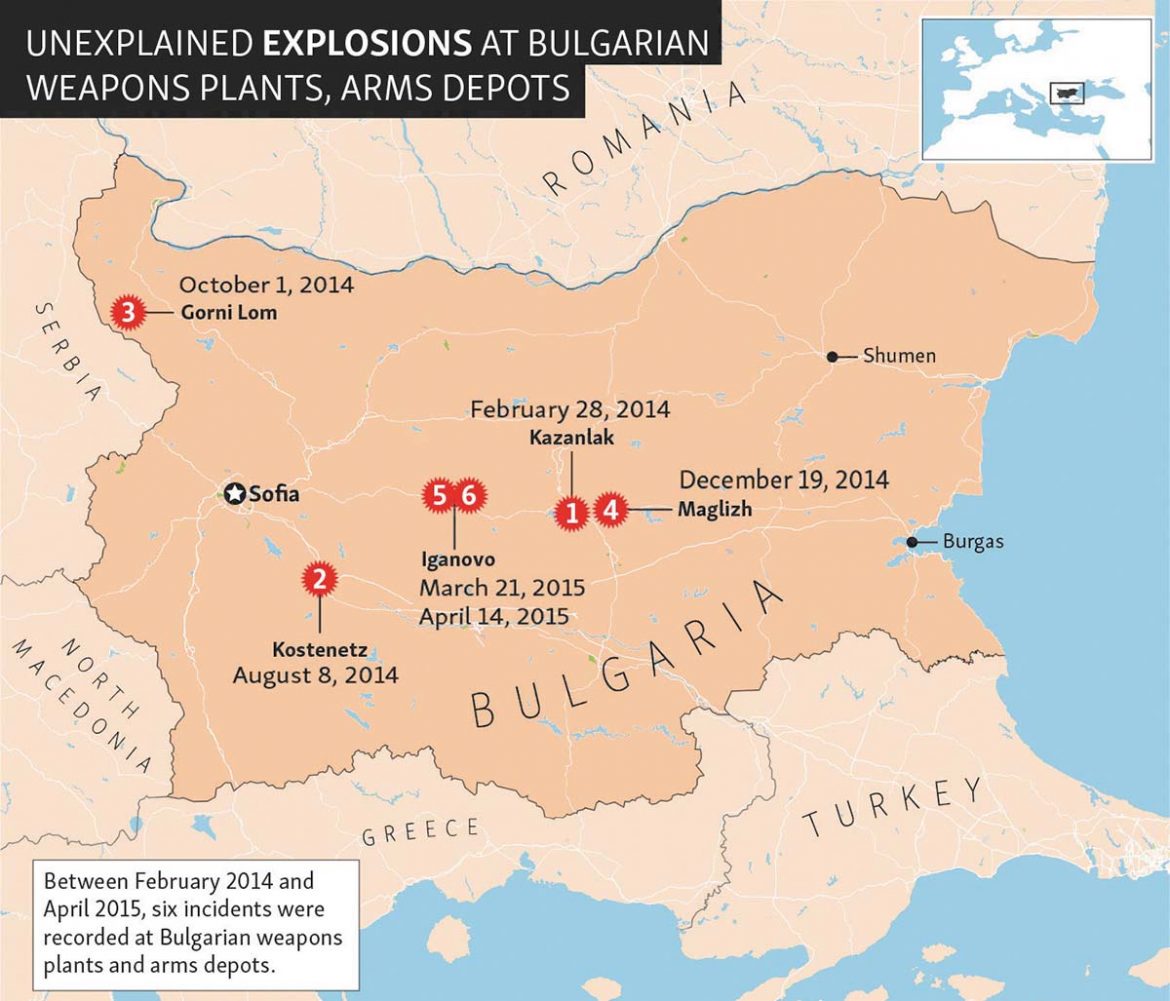 A map of Bulgaria showing where the explosions took place.

The GRU officers named by Czech authorities are the same two suspects sought by British detectives in the 2018 poisoning attempt of former Russian military intelligence officer Sergei Skripal and his daughter in England.

Both had used fake Moldovan and Tajik identities when registering their interest to visit the Vrbetice arms depot that exploded in eastern Czech Republic. Citing a Ukrainian source in the arms trade, Bellingcat said it is standard practice by Russian military intelligence to offer “significantly above market prices” to purchase weapons Ukraine has sought as a preventive measure.

Russia has denied involvement in the Czech and Bulgarian blasts as well as the poisoning of Mr. Gebrev.

“Either the Bulgarian side knew nothing about this for the past 10 years and only now, after the Czech Republic announced the 2014 incident, decided to outshine the Czechs and look further back into history, or they knew about it for all this time but did not make it public for some reason,” Russian Foreign Affairs Minister Sergei Lavrov told reporters on April 28.

GRU unit 29155 is an elite group that has been linked to assassinations and attempted assassinations, coup attempts, sabotage and other subversive activities in Europe, including Ukraine.

It took part in the forcible seizure of Ukraine’s Crimean Peninsula in 2014, a failed coup in Montenegro in 2016 as the Balkan country sought NATO membership, possible destabilization operations in Spain during the Catalonia independence referendum of 2017, and the assassination of a former Chechen rebel commander in Berlin two years ago.

Bellingcat posited that the GRU’s operations in Bulgaria and the Czech Republic were initiated “shortly after July 2014 when Russian authorities subordinated the disparate Russia-supported militant groups in the Donbas region of eastern Ukraine under central control and military supervision of the GRU.”

In yet another connection to Ukraine, Czech authorities on April 21 detained five of their citizens on suspicion of fighting on the Russian side of the Donbas war. Three of the suspects were jailed two days later. The two other suspects were released on their own recognizance.

In addition, at the time of the 2014-2015 explosions in the Czech Republic and Bulgaria, Ukraine was Russia’s only ongoing large-scale battleground.

Moreover, “telephone records analyzed by Bellingcat show that several members of [GRU] unit 29155 communicated actively with Russian military officers deployed to the Donbas, as well as with local militant commanders fighting against the central Kyiv government, in 2014 and 2015,” the research group said.

In Ukraine, explosions or fires have erupted at five different arms depots since Russia covertly invaded the country in 2014 in a war that has entered its eighth year, killed more than 14,000 people and displaced at least a million more.

They took place in the regions of Kharkiv, Vinnytsia, Chernihiv, Luhansk and Dnipropetrovsk.

Speaking to Ukrainian media during the past week, Viktor Yahun, a major-general who was the deputy head of the Security Service of Ukraine (SBU) from March 2014 to June 2015, said the blasts in and outside Ukraine are no coincidence.

“Then, the explosions that took place in Ukraine, if you put it all together, it seems that the weapons that we really needed at the front were actually destroyed not only in Ukraine but also in other countries,” he said over the past week.

As a result, Ukraine has lost about 40 percent of its ammunition stocks, or 210,000 tons, in the depot explosions, according to the TV channel Ukraine 24. The losses are the equivalent of more than $2 billion, former lawmaker Serhiy Pashynskyi, who headed parliament’s Committee on National Security, Defense and Intelligence, said in 2018.

In 2019, the SBU said it thwarted a subversive act in the planning stage at an arsenal of the Armed Forces without disclosing its location, Interfax news agency reported.

None of the five explosions since 2014 in Ukraine have been solved and a special parliamentary commission to investigate them was formed in December 2019.

In April 2020, a preliminary report was published with findings for two of the blasts.

It first focused on the one in Kharkiv because it was the biggest arms depot in eastern Europe where 91 percent of munitions were destroyed on March 23, 2017, the report said.

It furthermore debunked the SBU’s working theory that a drone had set off the explosion. Instead, a “detonation of an open ammunition storage site by exploding explosives sunk into the ground” caused the initial explosions, the report stated.

Yet, the SBU still maintains that an unmanned aerial vehicle caused the explosion, the report said.

In Vinnytsia region, the parliamentary commission “found that during the almost 2.5-year pre-trial investigation, the investigators did not reliably establish not only the causes but also the circumstances of the event. The perpetrators have not been brought to justice, which casts doubt on the objectivity of law enforcement actions.”