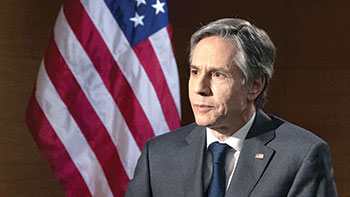 U.S. Secretary of State Antony Blinken speaks with RFE/RL’s Ukrainian Service in Kyiv on May 6.

Kyiv has requested U.S. air defense systems and anti-sniper technology, along with a possible deployment of Patriot missiles in Ukraine.

Mr. Blinken told RFE/RL on May 6 in an interview in the Ukrainian capital, where he met with the country’s top leaders, including President Volodymyr Zelenskyy, that the Pentagon is “looking at what additional assistance – beyond the very significant assistance that we’ve already provided, including equipment – would be helpful to Ukraine right now. That’s a very active consideration.”

The United States has provided nearly $5 billion in financial, humanitarian and military aid – including lethal anti-tank weapons – to Ukraine since 2014, when Russia forcibly annexed Crimea and backed separatists in two of its eastern provinces, sparking a war that has killed more than 13,000 people.

Mr. Blinken’s first trip to Kyiv since being tapped by President Joe Biden earlier this year to lead the State Department comes just weeks after Russia deployed more than 100,000 troops near the border with Ukraine and in annexed Crimea in what the United States called an act of intimidation.

Russia has withdrawn some of the troops and equipment, but much still remains, posing a serious and immediate threat to Ukraine, Mr. Blinken said.

“Russia has the capacity on pretty short notice to take further aggressive action, so we’re being very vigilant about that…and also making sure that we’re helping Ukraine have the means to defend itself,” Mr. Blinken said during the interview with RFE/RL.

Ukraine has called on the United States to threaten to exclude Russian banks from the SWIFT messaging system as a way to deter Kremlin aggression.

Some analysts say exclusion from SWIFT, which facilitates secure and fast communications between financial institutions, would be a significant blow to Russia’s economy.

Mr. Blinken said the United States “will consider every reasonable option” to deter Kremlin aggression against Ukraine, but declined to comment directly on the possibility of using SWIFT.

The top U.S. diplomat reiterated the Biden administration’s message that the United States is not seeking an escalation with Russia.

However, he said the United States does not accept the concept of “spheres of influence” and will respond to any Kremlin aggression that threatens Washington’s interests or those of its partners.

Mr. Blinken said it was “a recipe for an international system that falls apart.”
Last month, the United States and the European Union sought to send a global message about its stance on human rights and democracy when it announced coordinated sanctions against Russian officials over the incarceration of Kremlin critic Alexei Navalny.

Those sanctions came on the heels of punishments imposed on a series of Russian individuals and companies in connection with the Kremlin’s alleged poisoning of Mr. Navalny, an opposition politician, with a nerve agent and the hacking of U.S. government agencies.

Those alleged actions have increased the already severe strains in ties between Russia and the West, long seen by both as being close to, at, or below Cold War lows since the start of aggression against Ukraine in 2014.

Russia has continued to pressure Mr. Navalny and his supporters even after his imprisonment, seeking to shut down his network, which has published journalistic investigations into alleged corruption among the nation’s top officials.

To that end, in the May 6 interview, Mr. Blinken condemned Russia’s mounting pressure on independent media, including RFE/RL, saying it was a sign of Kremlin weakness.
“I think that countries that deny freedom of the press are countries that don’t have a lot of confidence in themselves or in their systems. What is there to be afraid of in informing the people and in holding leaders accountable?” he asked.