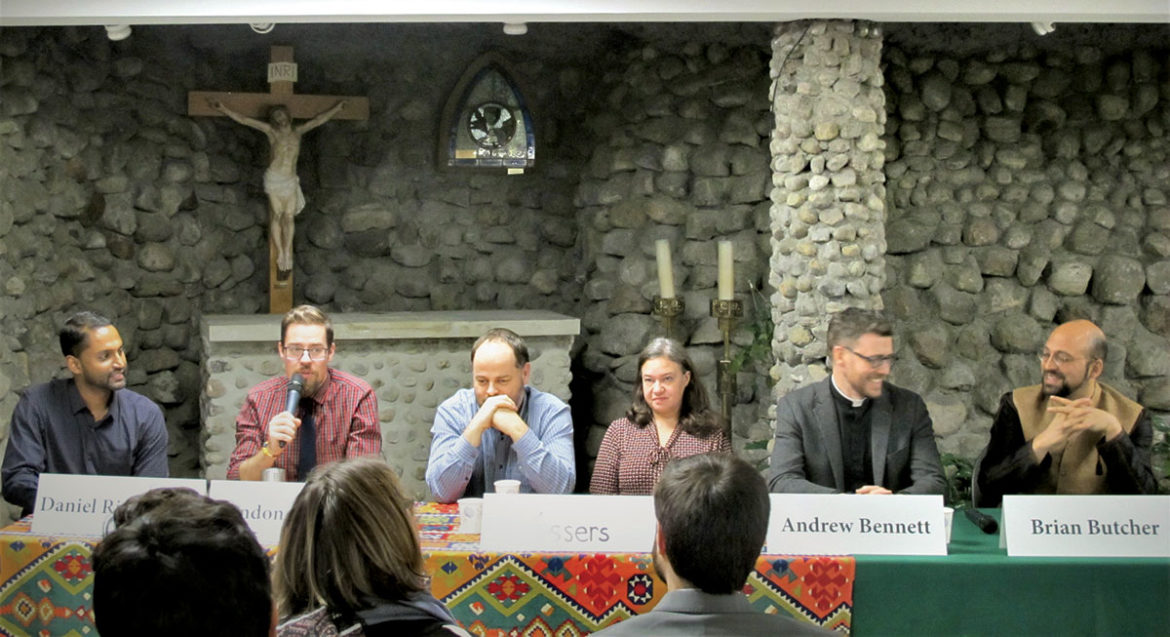 OTTAWA – Over the past quarter-century, an eclectic congregation has transformed the liturgical nature and enlivened the parish life at St. John the Baptist Ukrainian Catholic Shrine in Ottawa.

This mainly young group of people – none of whom are ethnic Ukrainian and many who were not raised Catholic – has breathed new life into not only the shrine community, but the overall Ukrainian Greco-Catholic Church in Canada. 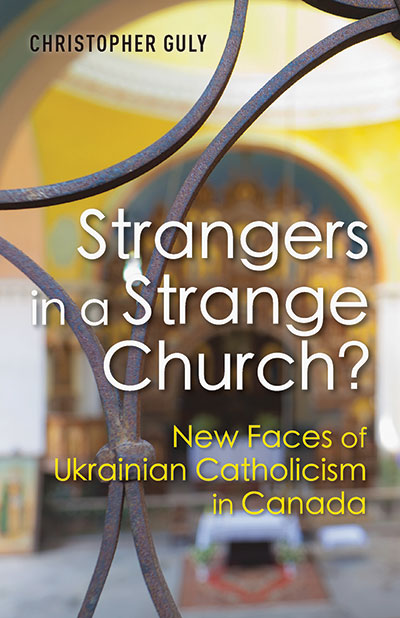 “Their faith formation took place in or via other faith communities, and in diverse ways they have all given back to their new community – not to mention the world at large,” wrote the Rev. Peter Galadza, a Ukrainian Catholic priest and director of the Metropolitan Andrey Sheptytsky Institute of Eastern Christian Studies at the University of Toronto, in the introduction to a new book titled “Strangers in a Strange Church? New Faces of Ukrainian Catholicism in Canada.” He noted: “They are among the best ‘Ukrainian’ Catholics I’ve ever met.”

Father Galadza commissioned me to write the book following a conversation we had four years ago during the weekly meal served in the St. John the Baptist hall after the 11:30 a.m. English-language divine liturgy. It was the Sunday of St. Thomas – that apostle who needed to see to believe – and I shared with my friend, Father Peter, what I saw that made me believe something vibrant was occurring within the Ukrainian Catholic Church in which I was raised.

I mentioned to him how struck I was by the sheer energy of those attending the liturgy – an experience different from the one I recalled growing up in Winnipeg, Manitoba.

There was energy at St. Nicholas Church in Winnipeg, a parish, like St. John the Baptist, also run by the Basilian Fathers – but it emerged from the Sunday morning choir of which I was a part.

The spirit at the shrine is more widespread. Congregants are active participants in services. They pray, they sing, they hug – and kiss, especially at Pascha Agape Vespers, one of many Church traditions the English-language crowed revived. They are joyful and joy-filled.

On that Eastertime Sunday, I shared with Father Galadza that I would one day like to write about this spiritual phenomenon that I saw filled with a sincerity that was hard not to believe. 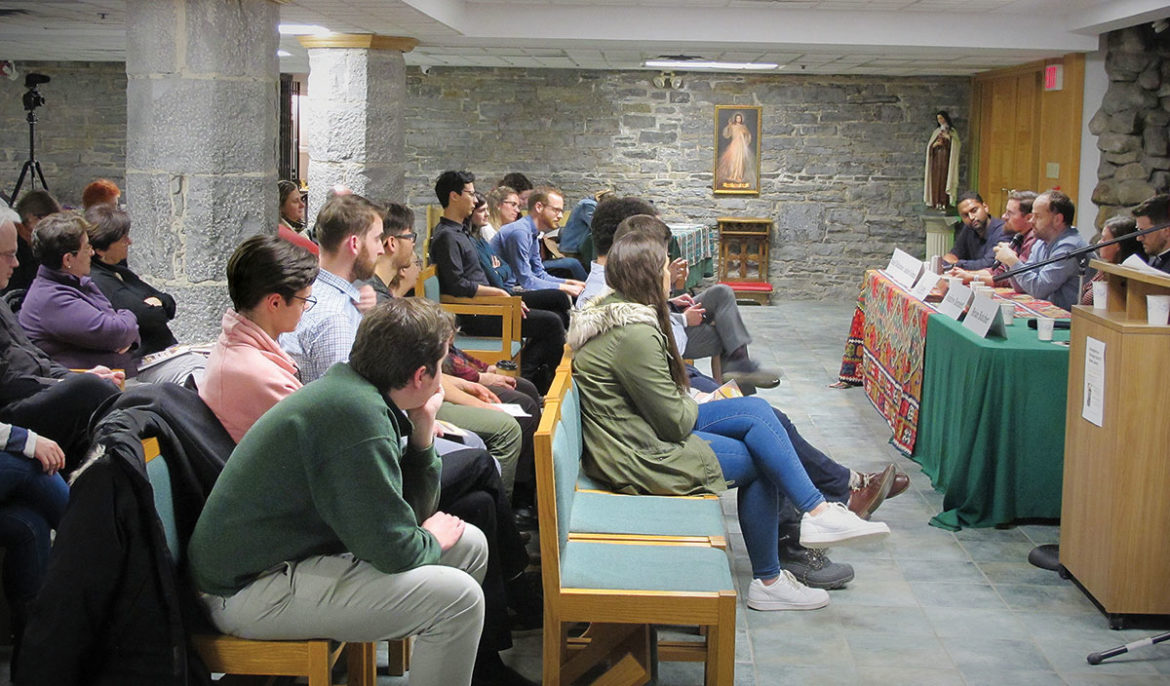 The audience at the book launch of “Strangers in a Strange Church? New Faces of Ukrainian Catholicism in Canada.”

Almost four years later, that book was officially launched in Ottawa on January 23 in the scavi at St. Patrick Basilica – a Roman Catholic church, it should be noted, which has it on sale at its bookstore.

Five of the nine people profiled in “Strangers in a Strange Church? New Faces of Ukrainian Catholicism in Canada” participated in a panel discussion to share their stories on why they joined the Church, based on a “passion for forging new relationships with others [that] has helped expose those who actually are of Ukrainian ancestry to the deep, rather than simply folkloric, grounding of their own Ukrainian spiritual tradition,” as Father Galadza wrote in his introduction.

Among the five were Harold and Rebecca Visser, who joined St. John the Baptist in 1998, and became pioneers as much as parishioners of the church.

Born in Vancouver in 1973 to parents raised in the Dutch Reformed tradition in their native Netherlands, Mr. Visser self-identified as an Evangelical Christian prior to his full-immersion baptism at the shrine during the Paschal Vigil in 1997 – about six months before he married Rebecca in Edmonton, where she was born in 1971.

The daughter of an Egyptian-born father and Dutch-born mother who met in the United Kingdom and were married in the Church of England, Ms. Visser was baptized in the Coptic Orthodox Church according to her father’s faith tradition.

When the Vissers, who have seven children, joined St. John the Baptist Parish, they were the only non-Ukrainian couple attending the church regularly.

Initially, they were seen as “interlopers,” as Ms. Visser recalled in the book. “Some parishioners couldn’t understand why we were in a Ukrainian Catholic church when we’re not Ukrainian. It was unfathomable to them.”

But she explained that it was faith, and not culture, that brought them to the shrine.

“We’re first and foremost Catholics,” said Ms. Visser. “We attend a Ukrainian Catholic church because of its beautiful expression of faith and the richness of its liturgical life.”

Today, she and her husband are the ones ordinarily welcoming new and existing worshippers to St. John the Baptist.

They came up with the idea of holding a post-liturgy luncheon on Sundays, where the Vissers and at least 14 other families take turns bringing soup or chili and bread to fill stomachs after the soul-filling service upstairs in the church.

The idea, according to Mr. Visser, was to “create a sense that the church is a community and not a place where you walk in, attend a service and walk out.”

“To have a healthy parish,” as he explained in the book, “you need to have three pillars: good liturgy, good teaching and good fellowship. You need all three to survive and thrive.”

Mr. Visser also served as the liturgical coordinator at St. John the Baptist, during which time English-language vespers were introduced on Saturday evenings – a rarity in Ukrainian Catholic churches across Canada – and from which followed matins being held before the Sunday English liturgy that are entirely lay-led.

To complement Sunday morning catechism, the Vissers organized a children’s homily during the regular homily of the English liturgy when young parishioners head downstairs to the parish hall (or outside on warm days) to discuss the Gospel of the day.

This unlikeliest of couples has helped fill the pews at the shrine with other new Ukrainian Catholics, including the three others on the book-launch panel. Among them are:

That matters little for a Church whose future is driven by propagating its spiritual tradition rather than focusing on its cultural roots and folkloric past.

Mr. Coleman, a former evangelical, hopes to play an evangelizing role at St. John the Baptist by helping to attract other non-Ukrainian Canadians to join the parish.

“I want Ukrainians to know that what they have is beautiful and should be shared – and that there has to be a balance struck between preserving the traditions and looking outward to try to make it easy for people to enter if they want to,” he explained in the book. “I’m hopeful that our community will become strong, and that we will get some of the non-attending Ukrainian Catholics back to church and minister to non-Ukrainians as well.”

More information on the Ottawa book launch can be found here: https://www.sheptytskyinstitute.ca/book-launch-strangers-in-a-strange-church-ottawa-canada/.

The 96-page book, published by Novalis, can be purchased here: https://www.sheptytskyinstitute.ca/strangers-in-a-strange-church-new-faces-of-ukrainian-catholicism-in-canada/.