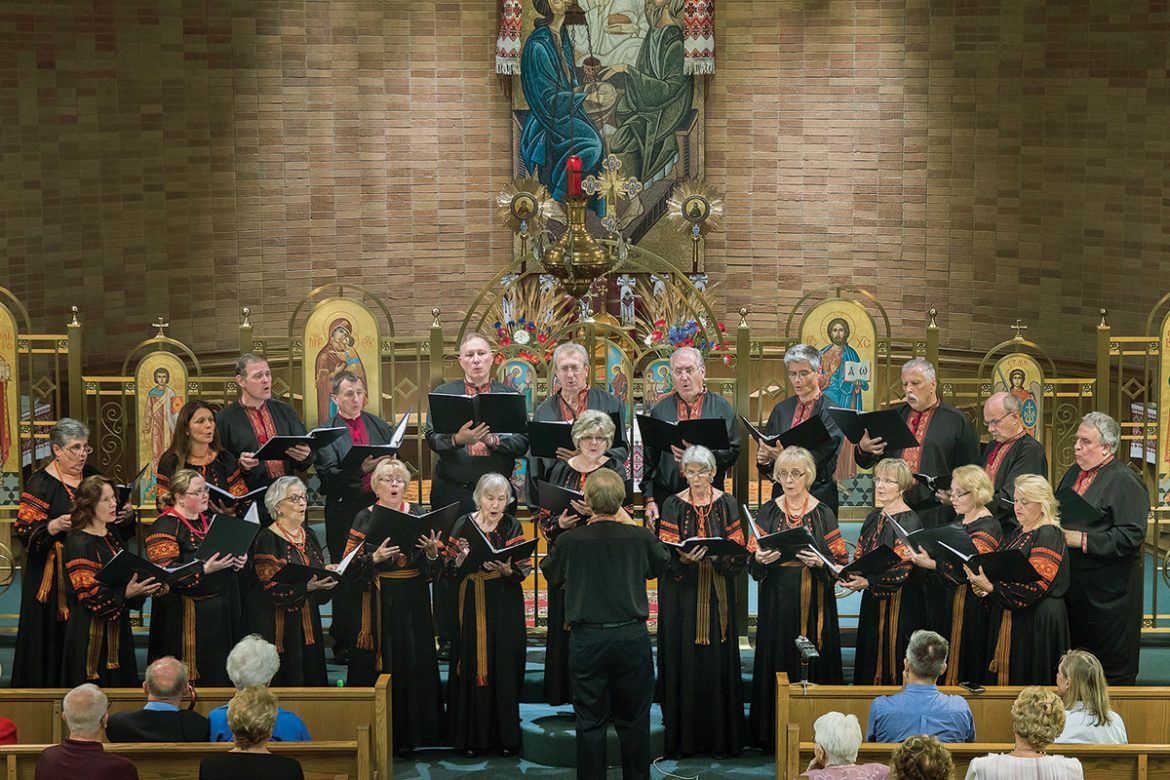 The Yevshan Ukrainian Vocal Ensemble of Hartford performs at a benefit concert for Boston Friends of UCU at Christ the King Ukrainian Catholic Church.

BOSTON – More than 150 supporters of the Ukrainian Catholic University (UCU) of Lviv gathered in Boston’s Christ the King Ukrainian Catholic Church after the last liturgy on Sunday, September 24, for a special concert of sacred and secular music by the 22 voices of the Yevshan Ukrainian Vocal Ensemble drawn from the greater Hartford Connecticut area under the direction of Alexander Kuzma and under the auspices of the Boston Friends of UCU.

In addition to being Yevshan’s music director, Mr. Kuzma is also the chief development officer of the Ukrainian Catholic Education Foundation (UCEF) which is based in Chicago.

The concert consisted of five sacred and five secular pieces and was, as Mr. Kuzma explained, “A thank-you to the greater Boston community for its ongoing support of UCU.”  He then went on to say that he was also dedicating the concert to the parishioners of Christ the King and its current choirmaster, Ihor Kowal, and to its branch of Plast Ukrainian Scouting Organization.  Numbers of those attending the concert remembered that Mr. Kuzma was a parishioner and choir director in Boston while he was at school and that he was active in Plast.  He also mentioned that two of the pieces that were being performed were written in Boston.

The concert opened with an “Alleluia” by Mykola Diletsky, followed by “Otche Nash” (Our Father) by Mykola Leontovych.  The third piece, “Pokayaniya” (Repentence) by Artem Vedel with its haunting plea “Open my heart to repentance” featured soloists Oksana Kit, Oksana Korolchuk-Szwez, and Yaroslav and Roman Zastawsky and was introduced by Petro Gluch, who emphasized that the composer tries to capture the powerful emotions of a penitent sinner trying to reconcile with God.   In this brilliantly constructed and beloved canticle, Vedel foreshadows the works of later composers and takes listeners on a journey into the darkest, bleakest and also the most hopeful corners of their souls – everything from joy at the prospect of reconciliation to abject terror as they contemplate the Day of Final Judgment.   This choral concerto is often sung during Great Lent on the Sunday of the Prodigal Son.

The fourth piece was the traditional “Kheruvymska” (Cherubic Hymn No. 7) by Dmytro Bortniansky, which was followed by an original composition by Mr. Kuzma of texts taken from Psalms 42 and 84 which was inspired by his 1986 trip to Alaska where the wonders of nature are on constant, spectacular display, and where it is impossible to fully absorb or fathom the glory of God’s Creation. 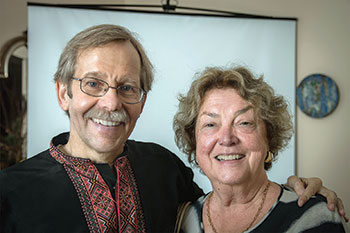 The last six pieces were all secular and began with “Zhyto-Maty” (Mother Grain) which was popularized by the Ukrainian National Chorus Veryovka.  “Yikhav Kozak Mistom” (A Kozak Rode Through the Town) arranged by Olena Chmul followed.   The piece is a modernization of a traditional song to young men on their way to battle.

The next selection “Na Lysyi Hori” by Vasyl Stus was set to music in Boston after it had been smuggled out of the USSR in 1986 as part of his poems – his “Palimpsests: Poems of 1971-1979” – just before the poet’s death in a Siberian labor camp and before they had been nominated for the Nobel Prize in Literature.   The verses give insight into the poet’s frame of mind in his last days of life as he remembers his true love’s hands when she bid him farewell on his way to prison and he ponders whether it was worth giving his life for the dream of Ukraine’s freedom.

The choral arrangement by Mr. Kuzma was done in Boston in 1987 and was sung in concert for the first time, also in Boston, this year.

The ninth selection, “Sirily u Sumerku” (The Tents Turned Grey in the Dusk) by Yurii Starosolsky/Yuri Piaseckyj, was dedicated to the members of Plast and the students and faculty of UCU, as well as to its president, Bishop Borys Gudziak, who studied at Harvard and earned his doctorate there. The bishop also is a member of Plast and helped continue the fight for Ukraine through its darkest days when all seemed lost.

The final piece, the “Kupalo Suite” was by the modern composer Yevhen Stankovych, a professor at the Kyiv Conservatory.  It is a suite of the joyous ritual songs from the midsummer celebration of Ivan Kupalo, an ancient pre-Christian holiday coinciding with both the Feast of St. John the Baptist and the summer solstice.

The night of Kupalo is a night of enchantment that celebrates the elemental power of fire and water, and the bountiful fertility of the earth.  As St. John was a voice in the wilderness, so too Kupalo evokes the beauty and the power of wild things. The suite encompasses the full cycle of a night’s celebration and concludes with a raucous finale that celebrates both the joys and heartaches that enrich all of our lives.

Speaking after the concert, Christine Slywotzky, a member of the Boston Friends of UCU Steering Committee who coordinated the concert, said, “In the past few years, through events like this concert, we have been able to fund the Boston Seminar Room at the UCU Collegium with a gift of $75,000 and set up a $100,000 endowment fund for a lectureship in the University’s Good Governance Program.”

She continued: “As a result of gifts like ours and the ongoing achievements of UCU, the university has been able to attract some of the best talent in Ukraine.   As more scholarships become available, the number of outstanding students from all areas of the country will grow and the impact that UCU’s alumni will have on the country because of the disciplines and professions that the university offers is inestimable.”

Mrs. Slywotzky was assisted by Maria Fedynyshyn Saxe, who handled publicity for the event, and by the Duda, Popovych and Shuts families, who were tasked with catering chores in the parish center and assisted with a continental breakfast and a Ukrainian luncheon and then donated all proceeds from Sunday’s kitchen to UCU.

As a result, Mrs. Slywotzky was able to present the UCEF development director voluntary donations from the concert and proceeds from the kitchen totaling slightly more than $1,200.