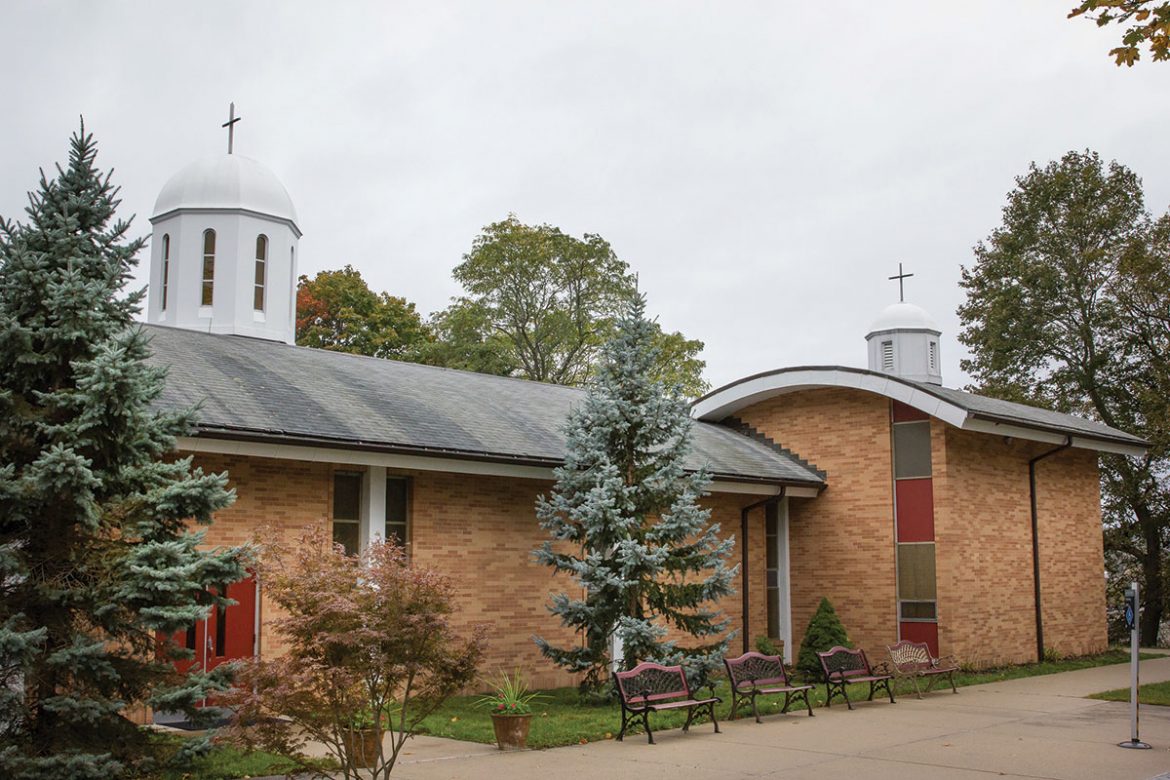 JAMAICA PLAIN, Mass. – The parishioners of Christ the King Ukrainian Catholic Parish of Boston celebrated the 110th anniversary of the canonical erection of their parish by Bishop Soter Ortynsky of Philadelphia in 1907 with a pontifical divine liturgy followed by a luncheon in the parish center on Sunday, October 29, which was also celebrated by the church as the Feast of Christ the King.

The festivities began at 10 a.m. with the celebration of the liturgy in the packed church by Christ the King’s pastor, the Very Rev. Dr. Yaroslav Nalysnyk, which was offered for the parish, for all parishioners both living and deceased, as well as for Ukraine.

During his homily, which was given entirely in Ukrainian since most of the parishioners attending the liturgy were members of the Fourth Wave, Father Nalysnyk gave a brief overview of the history of the parish, pointing out that “Our earliest pioneers who came to Boston, for the most part, were young people who had decided to seek a better life in America.”

“They left behind their families and the lives that they knew,” Father Nalysnyk said, “and came to this country with very little. However, they were hard workers and they had faith in themselves and in God, and they never forgot their homeland: Ukraine.” 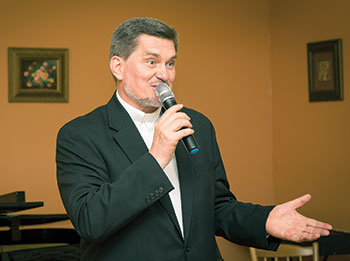 “Although they had little formal education, they had strong faith, and as practicing Ukrainian Catholics they sought each other out, banded together, and sent letters to Philadelphia asking that a Ukrainian priest come to Boston to say the liturgy for them as early as 1893,” Father Nalysnyk continued.

“And they did not stop,” he noted. “After the first Ukrainian liturgy in Boston in 1894, it took another 13 years before a parish was formally established and then another seven before they were able to buy a church building with a hall to finally anchor both their religious and community life.”

“Within a decade and a half the parish boasted several brotherhoods and sisterhoods, a Rosary Society, a Sacred Heart Society, a Saturday school, two choirs, a dramatic society, a marching band, and a club of young Ukrainian Americans,” Father Nalysnyk related.

“Over the years the parish continued to develop in spite of a number of obstacles that at times threatened its very existence, but people persevered and the parish is in very good shape today,” Father Nalysnyk said, adding. “It is now up to each and every one of us not only to maintain what we have in Boston but to build upon it for future generations yet to come.”

At the conclusion of the liturgy the pastor asked all parishioners who had brought religious articles to come forward and he spent time blessing each one individually.

Some 150 parishioners gathered afterwards in the parish center for a brief program and catered buffet luncheon. The afternoon began with Father Nalysnyk reciting a prayer of Thanksgiving for the ongoing life of the parish and then pronouncing grace. He was followed by members of the parish choir under the direction of Neal Raymond who sang “Otche Nash” (Our Father).

The program also included performances by pianists Sophia Syneiko and Adriana Priadko, a vocal ensemble composed of younger children from the parish. Myroslav Vintoniv concluded the brief program by playing “Ukrayinska Dumka No.1.”

At the end of the program Father Nalysnyk again took the microphone and thanked all those who participated in day’s celebration. He asked everyone to stand and sing “Mnohaya Lita” for all those who had a hand in planning and running the luncheon.

Boston’s first Ukrainian liturgy was celebrated in St. Leonard’s Italian Church, which is staffed by the Franciscans, in the late fall of 1894 with a priest coming from Connecticut for it. The church is located in Boston’s North End, which was a major point of settlement for Ukrainians at the time. St. Leonard’s remained the focal point, and, at first, priests only came several times a year. Before the turn of the century they were coming once a month, and by 1900 they were saying the liturgy weekly. The arrangement was that the Italians celebrated in the upper church and the Ukrainians in the lower, except when there were weddings and funerals, and then the Ukrainians were allowed to use the upper church.

At about the time the parish was established in 1907 it purchased a building on Beacon Street, which was then one of the finest residential streets in the city, for a rectory. In 1914 it bought a Methodist church on Arlington Street and by the early 1920s claimed almost 3,000 members.

In the late 1920s through the mid-1930s the parish experienced a period of turmoil and division and a number of very serious legal battles, which resulted in a major loss of membership. Things did not get better until the early 1940s when the parish started to grow again and accelerated considerably in the late 1940s and early 1950s with the influx of several hundred families from Ukraine fleeing the brutality of the Russian Communists. 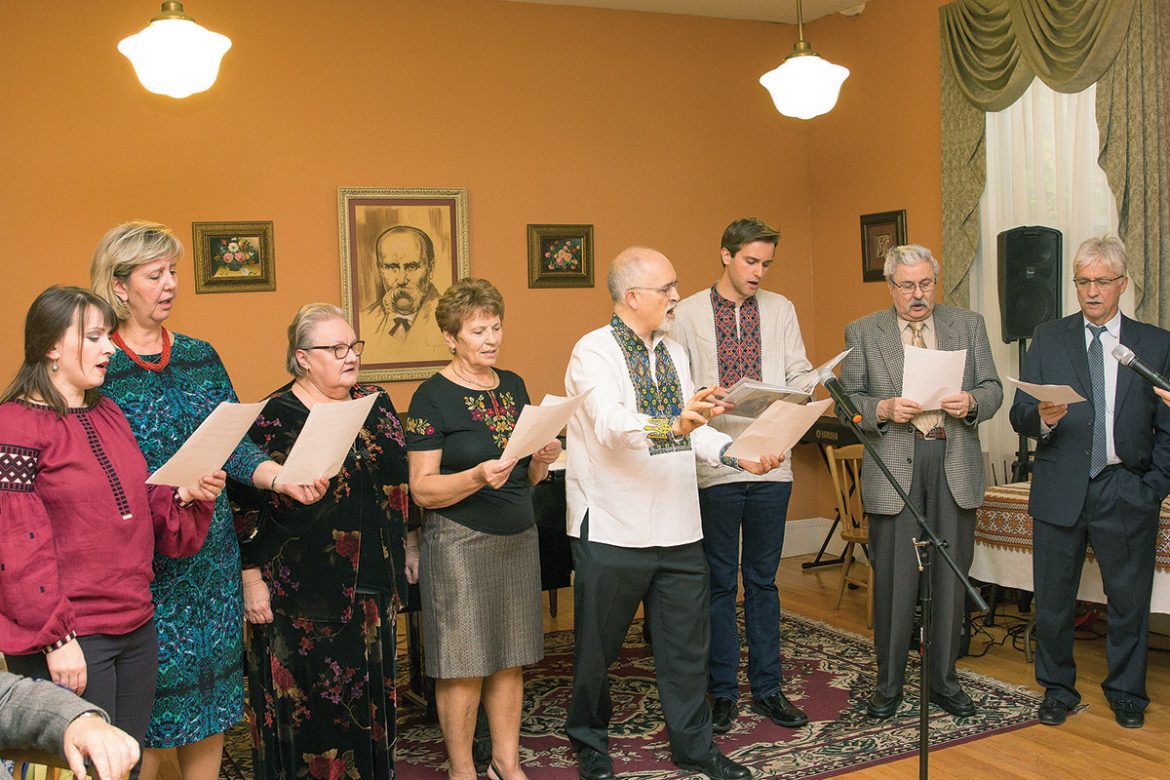 Part of Christ the King Choir sings “Otche Nash” (Our Father) at the parish’s 110th anniversary.

In 1952 the parish purchased nine acres of land and a mansion that had once belonged to a sea captain in the China trade in the Jamaica Plain section of the city. Construction was started immediately on the foundation of the new church, which would serve as a hall when the entire structure was complete. At almost the same time a second parish, St. George’s, following the Julian calendar, was established, and there was a period of adjustment as people decided which parish they would attend.

In 1965 St. George’s was taken by the state as it built a new highway and the two parishes in Boston were merged into a single entity called Christ the King, They used the existing facilities in Jamaica Plain, which proved to be a little tight. A new church was built atop a hill on the property and was immediately paid for in full. The church can be seen for miles around.

Today the parish is a blend of the old and the new. One liturgy is in English and attracts Ukrainian Americans, while the sung liturgy is in Ukrainian and is attended predominantly by Fourth Wave newcomers. Over 500 families belong to the parish, and it is alive and thriving with many religious and cultural activities. The parish has been very active in supporting a number of institutions and charities in Ukraine, including the Ukrainian Catholic University, seminarians at Holy Spirit Seminary, and soldiers wounded in the ongoing war in the east.

The nine-acre campus is well groomed and the church itself is lovingly attended to. The large mosaics are from Italy, the Stations of the Cross are icons that were painted at the Ukrainian Catholic University in Lviv, and there is embroidery everywhere – made both in Ukraine and in Boston. The old mansion has been lovingly restored and expanded, and now serves both as rectory and parish center.

In past 110 years the Boston parish has served as the mother church of five other churches of various denominations in the city.