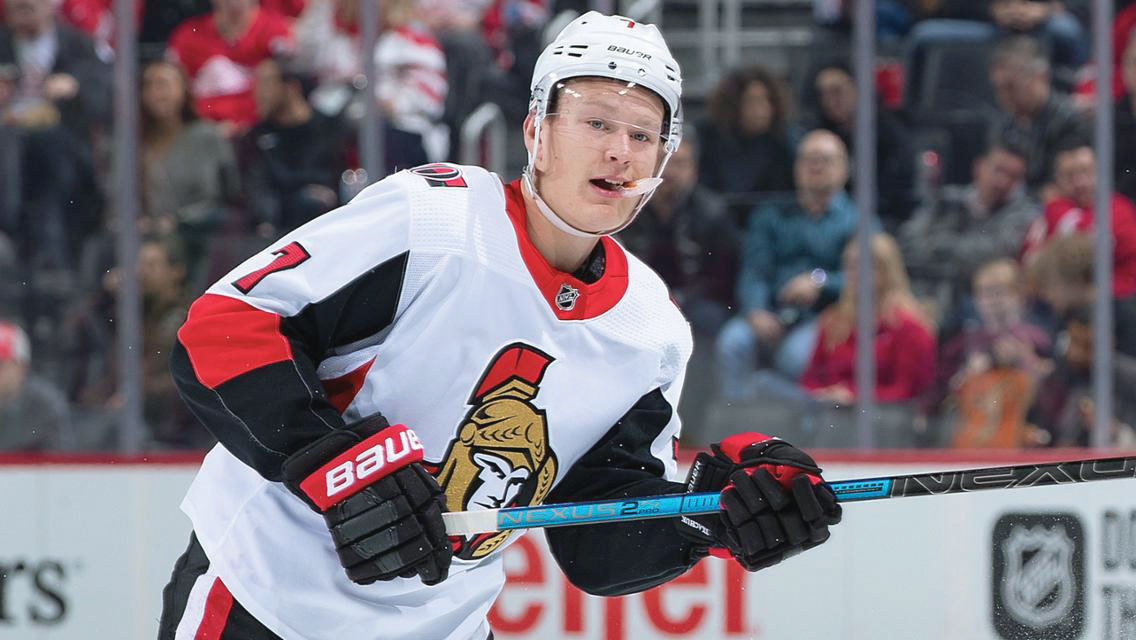 Brady Tkachuk skates with the Ottawa Senators in 2019

Heading into the 2018 NHL Entry Draft, Brady Tkachuk was ranked No. 3 on most prospect lists, an agitator who would make older brother Matthew look like a saint, a remarkable statement given the degrees of mayhem Matthew is capable of starting and finishing.

One time when they were young lads, the Tkachuk brothers were fighting and their grandmother was forced to call ex-NHLer Phil McRae in to break them up. Matthew’s idea of toughening up his little brother was to play mini-sticks with him and actually put him through a wall in their basement. Get-togethers with cousins usually involved boxing gloves. Matthew, who has had his share of entanglements over several years, admits Brady is the bigger, stronger and meaner brother.

Rowdiness aside, Brady Tkachuk is blessed with a high skill level. He’s a responsible player who plays all 200 feet of the ice and can make plays. He was Team U.S.A.’s best player at the 2018 World Junior Championship, better than Trent Frederic, Casey Mittelstadt and fellow Ukrainian Kieffer Bellows, at only 18 years of age. He impressed with three goals and nine points, playing in every critical situation, whether killing penalties, protecting a lead, scoring a big goal or being physical.

Picking fourth overall in 2018, the Ottawa Senators could not pass on a youngster with potential to be an elite point producer, a prototype power forward, an all-situations player and one who makes opponents feel a bit uneasy about playing against him. He was a potential multi-dimensional star general managers dream about finding – someone difficult to play against in more than one way.

He is a young man not lacking confidence, yet exuding no cockiness, just a solid hockey pedigree boasting the Fitzgerald and Hayes boys among first cousins. He learned the sport from father and mentor Keith, one of the toughest players of his generation, and got toughened up by older brother Matthew, in the process of developing his own intriguing reputation in the NHL. Brady is a young man with all of the elements present for potential future stardom.

A team guy
Both Tkachuk boys share many characteristics with their 500-goal scoring father. Whereas Matthew is more of an agitator, the 6-foot-3, 200-pound Brady projects to be the thicker, meaner, more punishing brother. Case in point was in his rookie season, shortly after his 19th birthday, he took exception to a hard hit on then-teammate Mark Stone by Detroit’s Justin Abdelkader, immediately dropped the gloves and scored a violent takedown to end the fight.

Intimidating on the ice, he’s the opposite off the ice, quiet and somewhat bashful, but with an occasional devilish sense of humor. Following his first bout, he told the media he was defending his landlord since he was living in then-teammate Stone’s house and the fight was him paying rent. He jokingly referred to Mikkel Boedker as another father figure in his life. The younger Tkachuk possesses the casual poise of someone who grew up in NHL locker rooms, yet never comes across as arrogant. Senators players agree that what Tkachuk brings to the team is not swagger, but an understanding of how to interact with the club’s old-school veterans because of his bloodlines.

Young Brady was quick to earn the respect of his mates because of lessons learned from his dad and Matthew. Dad’s advice from a young age was always compete and be a good teammate. His older brother would say focus on each day, try to improve every day and do as much as you can on and off the ice – simple things one can control and apply moving forward.

Hitting a dry spell means time for some hard work, turning a down-on-yourself temporary lull into a positive by outworking everyone in practice and studying tons of video.

Twenty-plus goals each year
His 2018-2019 rookie campaign saw Brady Tkachuk tally 22 goals and 23 assists for 45 points in 71 NHL games. In the incomplete 2019-2020 season, his sophomore year numbers had him with 21 goals and 23 assists for 44 points in 67 games. His penalty minutes increased from 75 to 104, a testament to his assuming more of a physical role on the ice, often times setting the tone, sometimes defending a teammate and answering a call to arms. He ranked second in the entire league in hits with 303, behind only Vegas tough guy Ryan Reaves (316). The twenty-two goals he scored in his rookie year were second-best among first-year players, behind Calder Trophy winner Elias Pettersson of Vancouver. Brady’s 15 goals in his first 48 games in 2019-2020 earned him a spot on the Atlantic Division team at the 2020 NHL All-Star Game. His ice time per game increased from 16:01 in his first year to 18:56 in his second year.

He may not have a lot of help around him yet as Ottawa trudges through a rebuild, but it may not matter. He has begun to display the ability to dominate games by himself. He shows up on the scoresheet, makes his presence known with aggressive body checks and leads by example. His peripherals suggest a player bubbling toward star status. This is no secret to the rest of the league as he’s constantly facing opposing teams’ best defenders on a regular basis, including top defensemen like Zdeno Chara, Morgan Rielly, Jacob Trouba and Alex Pietrangelo. Other teams already view the younger Tkachuk as the Senators’ top offensive threat.

Hockey experts will have a close eye on Tkachuk for quite some time. He’s not posting award-worthy numbers yet, since he lacks the help to set him up. He’s still managing to get himself into scoring position in spite of his team’s limitations. Teams are having difficulty containing him, and he’s only going to get better. It has been barely two seasons, but Brady Tkachuk has arrived. Going forward, one lingering question is which Tkachuk son is better, Matthew or Brady?

Tkachuk Tidbits: Chantal Tkachuk, nee Oster, wife of Keith Tkachuk and Brady’s mom, is Ukrainian. Her father is Winnipeg’s own Don Oster, known as the Ukrainian Iron Chef. Brady was born in Scottsdale, Ariz., while dad Keith played for the Coyotes. He was raised in St. Louis after dad was traded to the Blues in 2001. He played at Boston University one year (2017-2018), scoring 8-23-31 in 40 NCAA games. He was captain of the gold medal winning U.S. under-18 national team at the 2017 IIHF U-18 Championships.