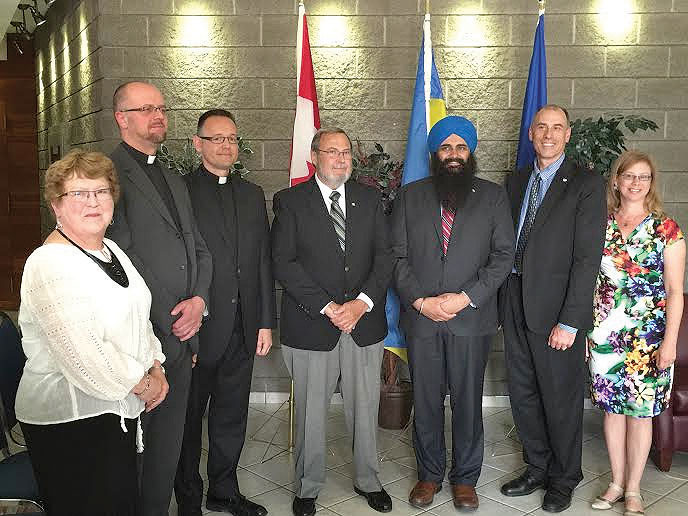 EDMONTON, Alberta – Two Ukrainian community institutions in Edmonton are the beneficiaries of a Canadian government program that supports projects which rehabilitate existing community facilities across the country. The funds allocated to the Ukrainian Youth Unity Complex and St. Josaphat Ukrainian Catholic Cathedral total over $350,000.

The Canada 150 Community Infrastructure Program is part of Canada 150 Celebrates, Canada’s celebration of its 150th anniversary. This program invests in community infrastructure to celebrate Canada’s heritage, create jobs and improve the quality of life for all Canadians.

In a special presentation made on July 26 at the Ukrainian Youth Unity Complex (UYUC), Minister of State for Multiculturalism Tim Uppal, member of Parliament for Sherwood Park, announced that the UYUC will benefit from the Canada 150 Community Infrastructure Program in the amount $300,100 and St. Josaphat Cathedral will receive $50,000. The amounts were presented under the theme ”Giving back to Canada: shaping the future, leaving a lasting legacy and giving a gift to Canada.”

On hand to accept these generous gifts to the community were Ivan Fedyna, president of the board of directors of the Ukrainian Youth Unity Complex, and Larissa Podilsky, board member. Speaking on behalf of St. Josaphat Cathedral was the Rev. Jim Nakonechny, deacon. Also in attendance were Father Stanislav Bjeli, associate priest; and Noelle Misko and Mike Sorochuk, parish council representatives. A special welcome was extended to Member of Parliament for Edmonton East Peter Goldring, a long-time supporter and friend of Edmonton’s Ukrainian community.

These funds that support rehabilitation projects for existing community facilities across Canada come at a very important time for both the Ukrainian Youth Unity Complex and St. Josaphat Cathedral. Although well-maintained, the UYUC is approaching its 50th anniversary, while St. Josaphat Cathedral is approaching the 75th anniversary of the current structure, though the parish has been in existence since approximately 1904. Both entities are extremely worthy recipients of this financial support and will use the funds to update their facilities. In the case of St. Josaphat Cathedral, the money will also serve to protect a significant architectural and religious treasure in Edmonton that reflects over 100 years of Ukrainian immigration to Canada.

For nearly 50 years, the Ukrainian Youth Unity Complex has been a mainstay of Ukrainian community life in Edmonton. Simply referred to as the “Sumivska Domivka,” it was built and continues to operate as a mostly volunteer-run organization. In 1967 the founders of the Domivka envisioned a place for the Ukrainian community to gather, a venue for concerts, social and family events, a place to provide positive educational and social activities for children and youth, a home for cultural development, and a place that encourages members, volunteers and guests to give back to the community. This vision has been realized, and so much more has been achieved.

The Domivka opened its doors in 1973 as a multi-use complex, offering an auditorium with stage facilities and a banquet kitchen facility. There are meeting rooms, a youth wing with a full-sized gym, a library, a gathering area and six classrooms. It is home to numerous organizations, including the Edmonton chapters of the Ukrainian Youth Association, the League of Ukrainian Canadians, the League of Ukrainian Canadian Women, the Verkhovyna Ukrainian Song and Dance Ensemble, the Dunai Dancers, the Verkhovyna School of Dance and the Marko Boyeslav Senior’s Association.

The Domivka is a beehive of activity on most days, with various recreational and instructional activities for youth, dance classes, choir and dance rehearsals, community functions and cultural events. The facilities have been booked for fund-raisers, community concerts, private functions, and municipal and legislative public events. For 2014, the UYUC boasts a 90 percent utilization rate, having served close to 16,000 guests.

St. Josaphat Ukrainian Catholic Parish was born out of the necessity to serve the spiritual needs of Ukrainian settlers who had started to come to the Canadian prairies in the late 1880s. The need for their own church and ministry was acutely felt. The first official Ukrainian liturgy in Edmonton was celebrated on November 9, 1902, in a borrowed church, St. Joachim’s, administered by the French Oblates. By 1904, the first Ukrainian Catholic Church of St. Josaphat was built for the princely sum of $2,500 and blessed in November of that year.

St. Josaphat’s became a bastion of Ukrainian community life in Alberta. As the community grew, so did parish life. Through the dedicated and visionary work of priests, sisters, missionaries and countless volunteers, numerous initiatives and projects came to life. These included schools, women’s organizations, a newspaper and choirs, to name only a few. Nevertheless, the parish and community endured the tragedy of the War Measures Act of 1914, whereby Ukrainians were subjected to internment, their property confiscated and newspapers in foreign languages could not be published. Soon after, in 1918, the outbreak of Spanish Influenza wreaked havoc on all Canadians.

These difficulties did not deter the faithful from their commitment to their Church and community. They rejoiced at the visits by Metropolitan Andrey Sheptytsky in 1910 and 1921 and at the arrival of Bishop Nykyta Budka in 1913. The parish continued to grow rapidly. By 1938 it was evident the community had outgrown its church, and by 1941 a new, larger church was built on at its current location. The church became a cathedral in 1948 and was declared a registered historic site in 1984 by the government of Alberta (www.stjosaphat.ab.ca).

Today, the St. Josaphat community faces the daunting task of renovating and maintaining its magnificent cathedral. Work has already begun and will take several years to complete. Fund-raising is under way, and many generous donations will be required to complete the work that is essential to protect this religious and architectural gem in the heart of Edmonton. Funding from the Canada 150 Community Infrastructure Program will be put to good use.

The financial assistance provided to the Ukrainian Youth Unity Complex and St. Josaphat Cathedral will help ensure that these entities can continue to serve the needs of the community and provide a lasting legacy for future generations of Canadians.

Lidia M. Wasylyn is a board member of the League of Ukrainian Canadian Women and secretary of the St. Josaphat Cathedral Parish Council.