Prime Minister Stephen Harper of Canada (left) with Ambassador Andrew Bennett, who was appointed on February 19 to head the newly created the Office of Religious Freedom within the Department of Foreign Affairs and International Trade. 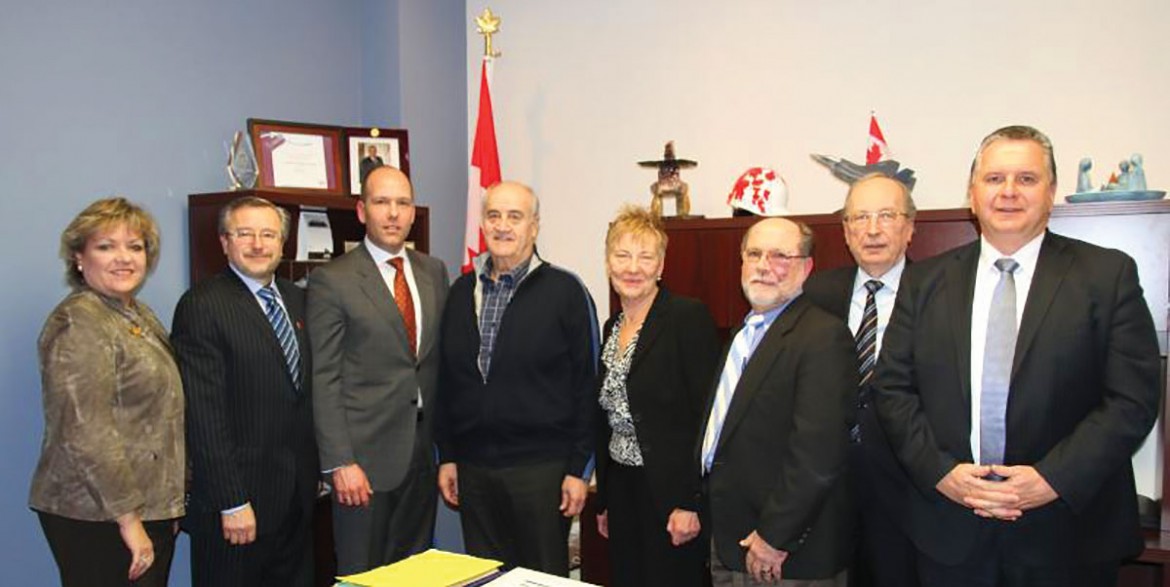 On January 15 the UCC met with Minister of International Cooperation Julian Fantino to discuss the community’s priorities relating to the Ukraine programming of the Canadian International Development agency (CIDA). The UCC wanted to ensure that the government of Canada maintained a policy of engagement with Ukraine, therefore it suggested areas of continued engagement. The UCC believed it was critical that Ukraine remain as a priority country for CIDA in order to support stability in a region that is facing significant democratic backsliding. There is a need to target those sectors where Canada has the know-how and experience to benefit both countries, the UCC noted. For Ukraine, Canada is most important in promoting governance, civil society and the medical educational system. The Ukrainian Canadian delegation noted the value of the 500-member observer mission that Canada had sent to the 2012 parliamentary elections in Ukraine.

On March 2-4, Minister of Citizenship, Immigration and Multiculturalism Jason Kenney was scheduled to visit Ukraine. On February 23 UCC President Paul Grod met with Minister Kenney and asked him to address a number of policy issues with Ukrainian government officials during his visit. Mr, Grod emphasized: Canada should express strong support for Ukraine’s Euro-Atlantic integration and encourage the expeditious signing of the Ukraine-European Union Association Agreement; Canada should continue to voice its concerns about the state of Ukraine’s judicial system and with the selective prosecution of political opposition figures; bilateral relations between Canada and Ukraine should be strengthened by moving towards a free trade agreement.

On February 19 Prime Minister Stephan Harper announced the establishment of the Office of Religious Freedom within the Department of Foreign Affairs and International Trade to promote freedom of religion or belief around the world, showing that freedom of religion is a Canadian foreign policy priority. The new ambassador, Dr. Andrew Bennett, is a subdeacon and cantor with the Holy Cross Eastern Catholic Chaplaincy and St. John the Baptist Ukrainian Catholic Shrine, both in Ottawa. He is also vice-president and chairman of the Metropolitan Andrey Sheptytsky Institute Foundation. During the Euro-Maidan demonstrations in the fall, Dr. Bennett had the opportunity to express Canada’s critical view in response to reports of pressure being brought to bear on the Ukrainian Catholic University in Lviv. He issued a statement on December 19, in which he stated: “Canada is concerned by the pressure Ukrainian security officials have been exerting on the administration and students of the Ukrainian Catholic University over the past weeks in Lviv, Ukraine. Freedom of speech, freedom of assembly and the freedom of religious educational institutions to operate without undue interference are important principles of any truly democratic country.”

Prime Minister Stephen Harper of Canada (left) with Ambassador Andrew Bennett, who was appointed on February 19 to head the newly created the Office of Religious Freedom within the Department of Foreign Affairs and International Trade.

After a Cabinet shuffle in the summer, representatives of the UCC, headed by President Grod, met with the new minister of citizenship and immigration, Chris Alexander, to discuss issues of concern to the Ukrainian Canadian community. Mr. Grod raised several immigration related issues with the minister: increasing the level of immigration from Ukraine; changing language requirements which currently are an impediment for workers and immigrants from Ukraine; and easing visa requirements for Ukrainian nationals coming to Canada. Evhen Duvalko, co-chair of the UCC Immigration Committee, later explained that, although the minister seemed open to a larger immigration from Ukraine, it would be a challenge for the UCC to maximize any opportunities available for such immigration in the context of current immigration programs.

The UCC delegation stated its stance on the denaturalization and deportation policy, as well as family reunification. It also made the new minister aware of its position on appropriate representation of Ukrainian-related issues in the Canadian Museum of Human Rights (CMHR), specifically the Holodomor and Canada’s National Internment Operations.

On November 27, a UCC delegation met with John Baird, minister of foreign affairs, to present its concerns about the current situation in Ukraine and the EU-Ukraine Association Agreement. UCC President Paul Grod explained that the UCC wanted to convey to the government, and the minister personally, its gratitude for supporting the European aspirations of the Ukrainian people, as well as for the support of Ukraine’s democratic development. But the UCC delegation also expressed its concern about the decision of the Cabinet of Ministers of Ukraine to suspend preparations for the signing of the Association Agreement.

Mr. Grod briefed the minister on his meeting with Ukraine’s Verkhovna Rada Chair Volodymyr Rybak, who had been in Ottawa and who had assured him that it was only the timing of the signing of the agreement that was at issue, because of the economic and political coercion being applied by Russia that would create significant economic hardship for Ukraine. Mr. Baird advised that he was dispatching David Anderson, his parliamentary secretary, to the EU’s Vilnius summit to monitor the situation and express support for the EU-Ukraine Association Agreement.

Minister Baird also said that Canada would be sending a 25-person election observer mission to monitor the repeat elections in five districts where results had not been certified by Ukraine’s Central Election Commission in the 2012 parliamentary elections. He underlined that the mission was a demonstration of Canada’s continuing commitment to supporting democratic development in Ukraine.

As proof that the Canadian government was keeping tabs on what was happening on the maidan at the time, Prime Minister Harper, who was in Pretoria, South Africa, on December 11, issued a statement on the use of riot police in Ukraine against protesters. He characterized the action as undemocratic and excessive, and said that Canada supported the Ukrainian people and opposed all efforts to repress rights and freedoms. He referred to the discussion of the situation in Ukraine that had been held in the Canada’s House of Commons.

On December 20 the UCC released a statement condemning an agreement signed by Presidents Viktor Yanukovych and Vladimir Putin in Moscow on December 17. The UCC characterized the agreement as placing Ukraine completely under Russia’s economic, political and cultural sphere of influence and that, without formally joining the Eurasian Customs Union, President Yanukovych had agreed to maximum cooperation and had accepted wholesale integration with Russia, including Ukrainian and Russian military cooperation and the entrenchment of Russian military presence on the territory of Ukraine. Furthermore Ukraine had consented to the development of cooperation in the field of secondary education and that, by agreeing to a plan for a joint celebration of the 200th anniversary of the birth of Taras Shevchenko in 2014, Mr. Yanukovych had surrendered the most iconic symbol of Ukraine’s national identity to Russia.

The Canada-Ukraine Parliamentary Program (CUPP) has existed since 1990 with over 700 students, mostly from Ukraine, completing internships in Canada. According to former Canadian Ambassador to Ukraine Derek Fraser, “the internship program is in many ways a better introduction to Western democratic practice than any course in political science.” For the fifth time a Model Ukraine Conference was also organized (on October 16-18) by the program to discuss the current state of affairs in Ukraine. The issues were first addressed by experts and CUPP alumni.

The opening presentation was given by Ambassador Derek Fraser, who spoke about how accession to the EU could help Ukraine on its path to a stable democracy. There were two full days of presentations – on education, citizen identity, development of democracy-building, judicial aspects, study of humanities, human rights and minorities, and freedom of expression. On the last day, participants discussed recommendations in groups which were then formulated in a white paper to be presented to the president and the government of Ukraine.

A crucial aspect of the CUPP program success has been the role of Ihor Bardyn, its founder and mentor. On October 24, Mr. Bardyn was presented with the Queen Elizabeth II Diamond Jubilee Medal for his role in conceiving and guiding a path dedicated to the democratization and development of Ukraine through the CUPP program.

Ted Ovitz, Conservative MP (Etobicoke Center) was chosen on March 4 as the new chairman of the Canada-Ukraine Parliamentary Friendship Group. The UCC expressed its support, saying that it considered Mr. Opitz, who represents a riding with a significant number of Ukrainian Canadians, a strong advocate for the interests of the Ukrainian Canadian community. The newly elected executive of the group has representation from across Canada: four members from Manitoba, two from Ontario, and one each from British Columbia, Alberta, Saskatchewan and Quebec. Sen. Raynell Andreychuk will serve as vice-chair of the Canada-Ukraine Parliamentary Friendship Group.