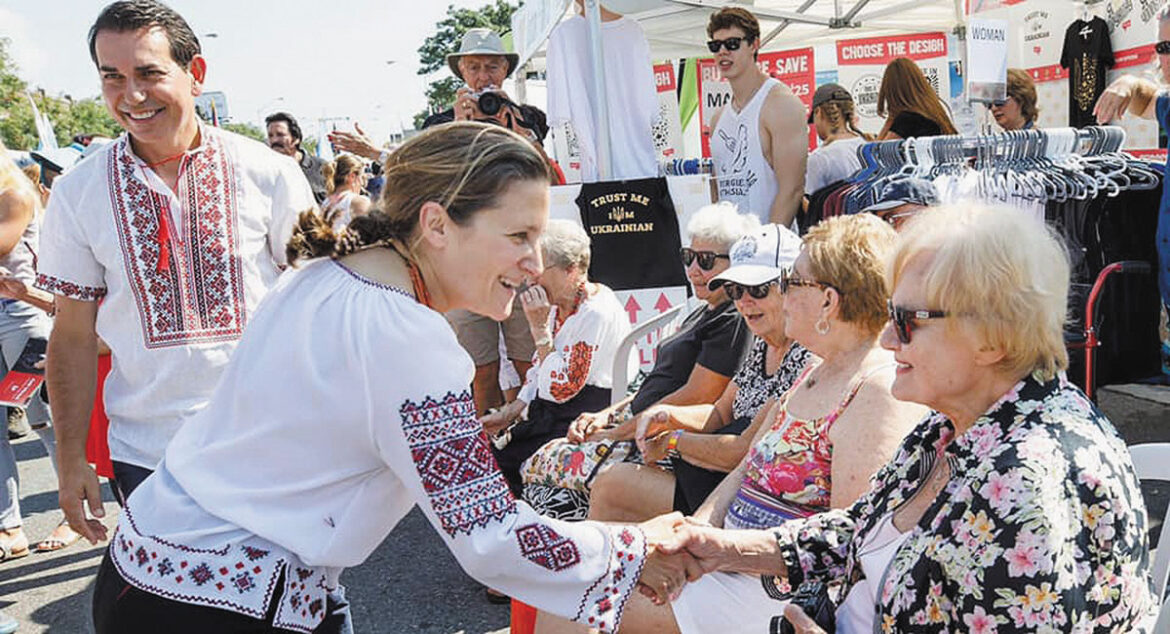 On August 24, Chrystia Freeland posted this photo on her Facebook Page. The caption read: “Today, my family and I are proud to join fellow Ukrainian-Canadians in celebrating Ukrainian Independence Day. Canada is a steadfast partner to Ukraine and will always stand up for its sovereignty and territorial integrity. Слава Украї­ні!”. (She didn’t say which year this picture was taken, but it is unlikely to have been this year.)

If there is one minister in Canada’s Cabinet that stands head and shoulders above all others – it is our Chrystia.

I say “our” Chrystia, because Deputy Prime Minister Chrystia Freeland is of Ukrainian origin and very proud of it. She has also been a very effective voice within Canada’s government for both our community in Canada and Ukraine in general.

Her grandfather, Mykhailo Chomiak, served as an editor with Lviv’s Dilo, Krakivski Visti and, at the end of his career, preceded me as editor of Ukrainian News in Edmonton. Ms. Freeland decided to follow in his footsteps and began her journalistic career freelancing from Ukraine in the late 1980s. This led to a variety of editorial positions at the Financial Times, The Globe and Mail and Thomson Reuters, but early in her career she also contributed to this paper and Ukrainian News.

She was elected to the House of Commons in 2013 and, following the 2015 election, was appointed to the Cabinet by newly elected Prime Minister Justin Trudeau as minister of international trade.

She performed a stand-up role in that portfolio – especially in dealing with the fractious European Union. At one point, she even walked out of the negotiations when an impasse was reached. This proved to be the catalyst that led to successful conclusion of the Comprehensive Economic and Trade Agreement (CETA) between Canada and the EU. (She also negotiated a free-trade agreement with Ukraine, but that was nowhere near as difficult.)

So, when Donald Trump won the 2016 U.S. presidential election vowing to rip up the North American Free Trade Agreement (NAFTA), Mr. Trudeau realized he needed a foreign affairs minister who had the gumption to stand up to him in the tortuous negotiations that were to come. Who did he turn to? Chrystia Freeland.

Then, last year, when Mr. Trudeau had his majority reduced to a minority, losing the popular vote and alienating western Canadians to such an extent that the Liberals were totally shut out in two provinces, he realized he needed someone who could mend fences with Alberta and Saskatchewan a lot better than he could. So, who did he turn to? Again, Chrystia Freeland. She was appointed deputy prime minister – a position that is filled at the discretion of the prime minister and had been vacant since 2006. In addition, she was allocated the portfolio of intergovernmental affairs so she could deal with the Conservative premiers. This she did and achieved much better rapport with them than Mr. Trudeau ever managed.

And when, on August 6, Mr. Trump decided to impose tariffs on Canadian aluminum, despite the fact this would cause economic harm to both countries, who was it who spearheaded Canada’s response? Not Mr. Trudeau. Once again it was our Chrystia.

She announced that Canada will impose dollar-for-dollar tariffs on U.S. metal products. What’s more, the targets will include numerous products made in swing states key to the U.S. president’s re-election.

And, most recently, when Finance Minister Bill Morneau announced his sudden resignation (some say he was forced out to serve as the scapegoat for the WE charity scandal), who did Mr. Trudeau turn to? Chrystia Freeland once again.

While this is a historically significant appointment – the first time a woman has ever been named to that particular Cabinet post, it comes during the worst economic crisis Canada has suffered since the Great Depression. Aside from a record unemployment rate of 13.7 percent – the highest since comparable record-keeping began in 1976 – the federal government is ready to post a $343 billion deficit next year, or roughly 16 percent of GDP, dwarfing any fiscal shortfalls previously seen in Canadian history.

So, Ms. Freeland has her work cut out for her. But most observers are convinced she will tackle that crisis successfully, just as she has tackled other crisis situations in the past. She is Prime Minister Trudeau’s – and Canada’s – most indispensable minister.

Many believe she would be a much better prime minister than Mr. Trudeau himself. Some even say he should step aside now. This is unlikely to happen soon, but it does look like Mr. Trudeau is grooming her to become his successor.

One way or another Ms. Freeland’s time will come. And that will mark a most significant achievement for Canada’s Ukrainian community.