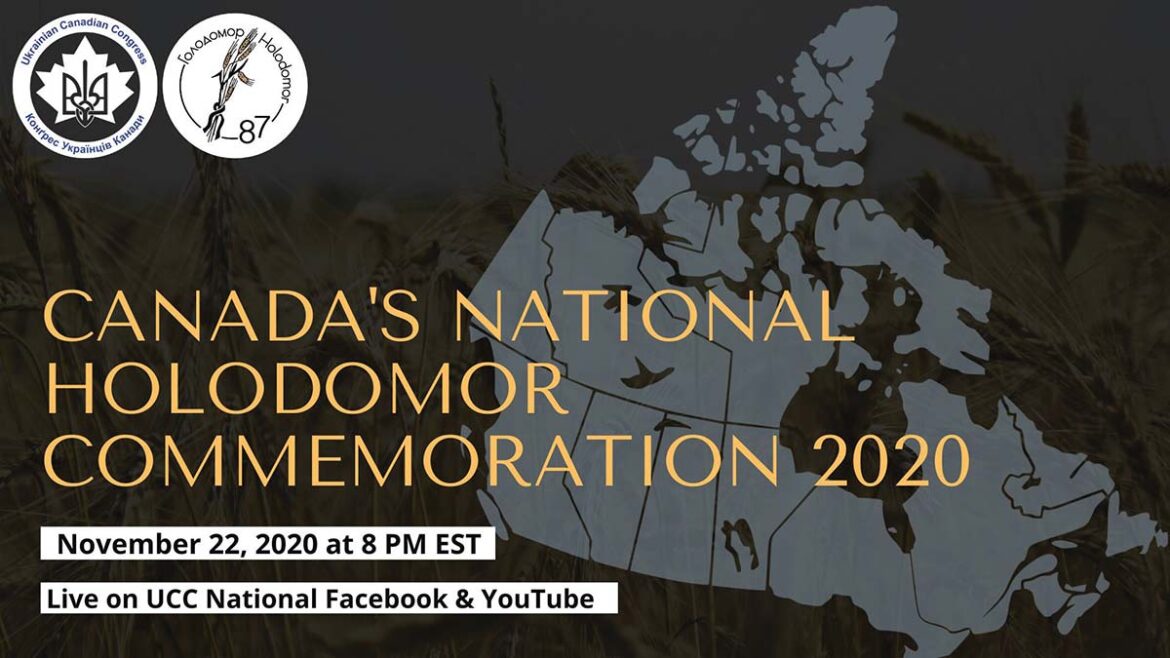 Graphic announcing the virtual national commemoration in Canada of the 87th anniversary of the Holodomor.

A video of the Edmonton woman, born on February 14, 1923, in the Ukrainian village of Hrynivtsi in the Zhytomyr region, has been online for the past seven years, but was again highlighted as part of the Ukrainian Canadian Congress’s pandemic-prompted virtual commemoration on November 22 (https://www.youtube.com/watch?v=QKs9dHOUXY8).

“A lot of people died. I saw this,” Ms. Krikun recalled of the genocidal famine, perpetrated by Joseph Stalin’s Soviet regime, which between 1932 and 1933 claimed the lives of nearly 4 million Ukrainians, according to the findings of the Kyiv Court of Appeal in 2010.

During this time of COVID-19, no major public prayer services or candlelight vigils were held in Canada to remember an unspeakable atrocity that occurred less than a century ago, after the previous global pandemic.

Instead, communities organized smaller events with a limited number of people or took to the web to hold a memorial, as was the case with the UCC’s commemoration, presented in conjunction with the Embassy of Ukraine in Ottawa and the Canada-Ukraine Parliamentary Friendship Group.

The virtual setting allowed for segments to be pre-recorded, including messages from Canada’s three main political leaders who might not otherwise have been physically present at a memorial vigil.

“Every year, Holodomor Memorial Day reminds us to take pause and reflect on one of the darkest chapters in human history,” said Prime Minister Justin Trudeau in an English-French online address.

“We remember the millions of Ukrainians who suffered and died of famine during the 1930s. This genocidal act was designed to break the spirit and erase the identity of the Ukrainian people. But the tyrannical regime of Joseph Stalin did not achieve its aim. Despite the brutality of the Holodomor, Ukrainians endured. You held onto and protected your language, your culture and your identity,” he said.

“For decades the atrocities of the Holodomor were denied and the suffering of Ukrainians was hidden from the world. But events like this one help make sure that the memories of those who suffered live on, and more importantly, that such horrors never happen again,” said the prime minister, who also “reaffirmed Canada’s unwavering support for a free and independent Ukraine.”

Erin O’Toole, leader of the Official Opposition Conservative Party, highlighted this year’s commemoration as the 87th anniversary since the end of “this horrific crime against humanity, orchestrated by the Soviet dictator, Joseph Stalin.”

“The deliberate starvation of millions of Ukrainian men, women and children between 1932 and 1933 is a reminder of the horrors perpetrated by the Soviet Communist regime. While the Soviets tried to deny the Holodomor – cover it up and keep Ukrainians behind the Iron Curtain, they failed,” he noted.

Mr. O’Toole referred to The Ukrainian Famine and Genocide (Holodomor) Memorial Day Act, a private member’s bill his Conservative colleague, Manitoba Member of Parliament James Bezan, a Ukrainian Canadian, presented in the House of Commons in 2008 and which was adopted, officially recognizing both the fourth Saturday of every November as Holodomor Memorial Day in Canada and the Holodomor as genocide.

This legislation “immortalize[ed] the memory of innocent victims” of the Holodomor, said the Tory leader, who thanked members of the Ukrainian Canadian community “for their tireless efforts in preserving this tragic page of world history by collecting the stories of survivors and educating the public about the horrific treatment of Ukrainians by the Soviet regime.”

“While this year’s commemorations will take place online, let us all pledge to never stay silent in the face of adversity and forever remember the victims of the Holodomor,” Mr. O’Toole said. “Memory eternal.”

During the virtual memorial, Jagmeet Singh, leader of Canada’s left-of-center New Democratic Party, said that it was “vital to acknowledge this genocide in order to heal from the harms and in order to commit to ensuring that this never happens again to the people of Ukraine.”

He added that, “when we acknowledge a genocide, we collectively denounce any form of violence against any people and commit collectively to ensure that this never happens again to any community.”

Andriy Shevchenko, Ukraine’s ambassador to Canada who acknowledged that he “comes from a family of Holodomor survivors,” said the annual global tradition of commemorating the Famine-Genocide holds important meaning.

“First of all, it’s a way to pay tribute to the millions who suffered and died during the cold winter of 1933 across Ukraine. It’s a bitter reminder that the lives of those we love are so fragile and that we should never take for granted all we have around us,” he explained.

“Second, it’s a strong conviction against ruthless criminal regimes ready to destroy millions of lives and to wipe nations off the face of the earth just to feed their mad ambitions. Unfortunately, even today, we know there are regimes like that – and that is why we are so thankful to Canada for keeping the memory of Holodomor,” the ambassador continued.

Ambassador Shevchenko said that commemorating this cruel chapter of human history is also “a source of light and hope and historic optimism because Stalin and the architects of the Holodomor badly failed in their main goal to break the will of Ukrainians.” He underscored: “Ukraine has gained its independence and now, as one of the [world’s] free nations, struggles to build a fair and peaceful world order where Holodomors will never ever happen again.”

The challenge today, according to UCC National President Alexandra Chyczij, is for Ukraine to keep its independence.

“For seven years, Russia has waged a war of aggression against Ukraine,” she said. “Russia’s war is guided by the same evil impulse: the cruelty of imperialism – the denial of a nation’s right to self-determination – indeed to its very existence – that guided the Soviet Communist regime.”

Ontario Liberal MP and Canada-Ukraine Parliamentary Friendship Group chair Yvan Baker pointed out that eight decades ago, it was Stalin’s regime that “closed Ukraine’s borders and confiscated all grain to destroy a Ukrainian population that sought the same freedom that the people of Ukraine are fighting for today.”

Mr. Baker, a Ukrainian Canadian who noted that his grandmother was a Holodo­mor survivor, put the imposed mass starvation into context based on fatalities at the height of the genocide: 19 people died per minute, 1,200 per hour, and 28,000 per day.