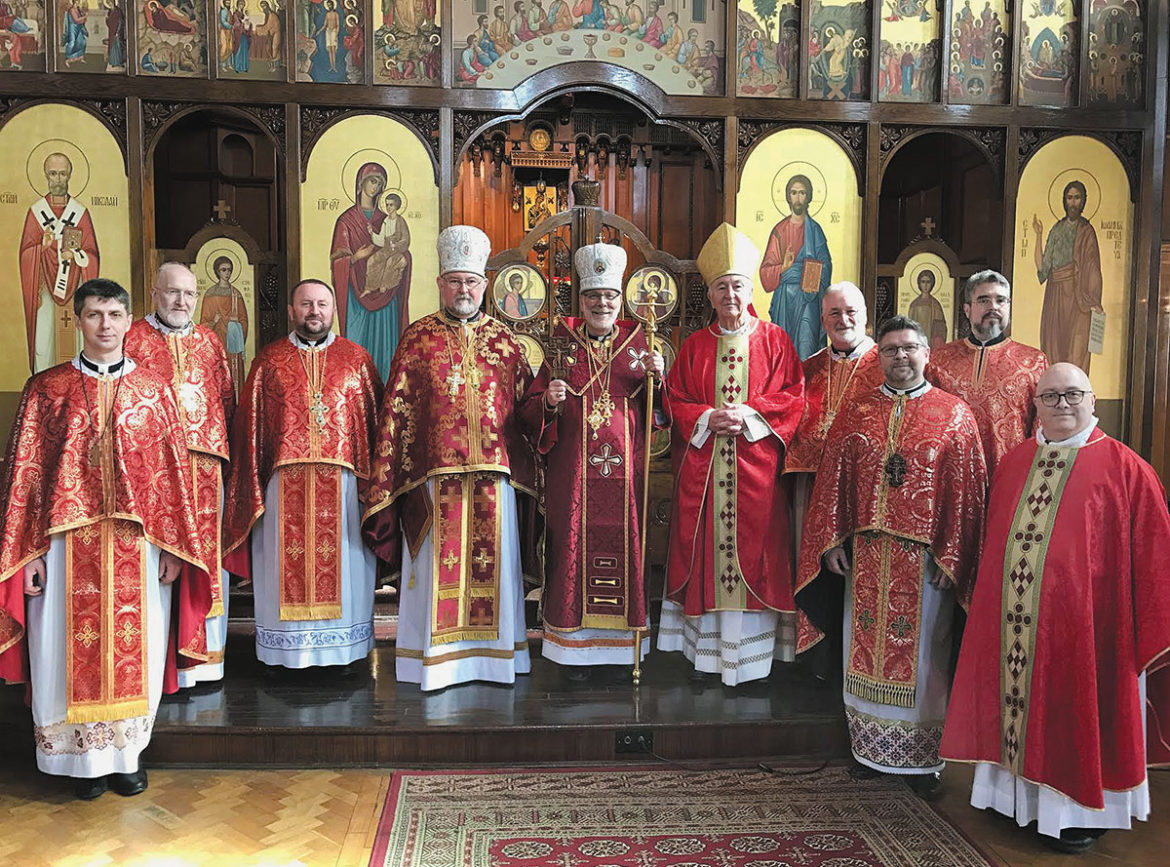 Ukrainian Catholic Eparchy of the Holy Family of London

OTTAWA – Holy Week and Easter comprise the apex of the liturgical calendar in the Catholic Church. But Canadian Kenneth Nowakowski, the newly installed Ukrainian Catholic bishop of the Ukrainian Catholic Eparchy of the Holy Family in London, will be marking the Crucifixion and Resurrection – like all of his fellow prelates around the world – in a cathedral with empty pews.

The global lockdown in response to the COVID-19 pandemic has forced churches to shutter their doors to the faithful. Many, including the Cathedral of the Holy Family in London that last year had as many as 7,000 attend Easter divine liturgies, have turned to social media to broadcast services. 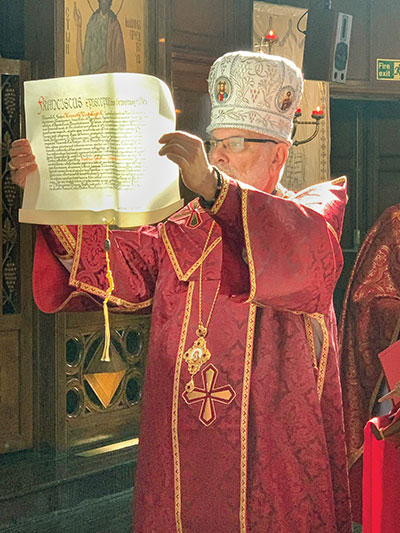 For Bishop Kenneth, that digital delivery of worship has been the norm from day one on the job in the British capital.

Appointed by Pope Francis on January 15 as the new eparch of London, the 61-year-old, Saskatchewan-born then-head of the West Coast Canadian eparchy of New Westminster was to be formally installed at an enthronement ceremony on April 7, the feast day of the Annunciation on the Julian calendar.

Bishop Kenneth spent a week in February in the United Kingdom when he introduced himself to parishioners at the cathedral and celebrated four Sunday liturgies that attracted, by his estimate, 2,000 congregants. Although, the coronavirus had spread by then to the U.K., he fully expected that he would return for his official welcome at the cathedral, built in the late 19th century as a Reform Methodist church, that the Ukrainian Catholic Church had acquired in the late 1960s.

“I thought, okay, we might have to tone things down – maybe there won’t be a catered reception afterward, but we should be able to do the church service,” said Bishop Kenneth in a phone interview from London on March 27, the day British Prime Minister Boris Johnson announced that he had tested positive for COVID-19.

When two weeks earlier, Sophie Grégoire Trudeau, wife of Canadian Prime Minister Justin Trudeau, was diagnosed with the novel coronavirus after traveling to the U.K., Bishop Kenneth realized that he had to cross the Atlantic before Britain closed its borders.

Originally, he was to arrive in London on March 21. But that turned out to be the date of his enthronement after the city started to shut down and Major Archbishop Sviatoslav Shevchuk, primate of the Ukrainian Greek-Catholic Church, was be unable to travel to the U.K. to preside over the installation ceremony.

In his stead, Cardinal Vincent Nichols, the Roman Catholic archbishop of Westminster and president of the Catholic Bishops’ Conference of England and Wales, presented Bishop Kenneth with the crosier used by his predecessors in London, following the reading of the papal bull that officially named the Ukrainian Catholic bishop of New Westminster, British Columbia, as the new eparch of London. The event occurred in a cathedral coincidentally located in the West End district of Westminster, about a 20-minute walk from Buckingham Palace, the Queen’s London residence.

Only eight priests, one cantor and two female parishioners, who used smartphones to take photos and livestream the ceremony on Facebook, were present for the historic event.

“It was a very different experience,” recalled Bishop Kenneth, who headed the eparchy in New Westminster since 2007.

“When we walked into the cathedral, of course it was empty – and it can hold about 850 people. And then it just struck me, when I was a seminarian at Saint Josaphat’s [Ukrainian Pontifical] College in the 1980s, once a month we would go to Vatican Radio and sing the responses to the divine liturgy that was being broadcast to the Soviet Union.”

That experience involved only the priest celebrating the liturgy along with the handful of seminarians in a studio. “But you knew that you were being listened by several thousand people around the world,” said the bishop, whose two-hour-long episcopal enthronement ceremony received more than 30,000 views on Facebook.

The cathedral continues to stream services on the social media platform and, with it, reveals the new realities confronting the Church that is now unable to provide direct contact to worshippers and administer the sacraments, according to Bishop Kenneth, who served as director of the Catholic press office during Pope John Paul II’s historic visit to Ukraine in 2001.

“Those people who are already attending church probably did pray at home, and those people who now are tuning into online broadcasts are perhaps finding comfort in prayer,” he explained.

“Once our churches are able to open up again, I think that we also will have learned some important pastoral lessons. We’re right now in school, so the lessons we’re learning will have to be shown when this pandemic, God willing, is over,” he said.

“I think that this could be an event or a situation that finds people wanting to come together in public worship at their churches,” added Bishop Kenneth. “Perhaps what we saw in the past is a lot of people saying, ‘Do I really need to go to church to pray,’ and now they don’t – but are they praying?”

He believes the COVID-related, physical-distancing rules in place in the U.K. and around the world could also provide a learning experience for priests.

“That we are able to provide pastoral service to a large degree through social media is a great thing – and maybe it is teaching us pastors the importance of communication,” said Bishop Kenneth. “Did we take the ability to communicate to people for granted? And now I think we have to find new and innovative ways.”

For now, London’s new and technically only Catholic bishop (Cardinal Nichols’s ecclesiastical authority bears the name of England’s pre-British capital) will have to acquaint himself with his new eparchy in an online environment.

He is holding regular videoconferences with his clergy that consists of 14 priests responsible for 27 parishes and missions throughout England, Scotland and Wales. Reaching his flock, estimated at 18,000 people throughout the U.K., will be limited to the web.

Right now, Bishop Kenneth, who has shown no symptoms of COVID-19, is like most Britons, staying at home – in his case a four-story brick building adjacent to the cathedral, which serves as his residence and chancery.

“It’s kind of difficult to stay indoors because we’ve had beautiful, beautiful sunny warm weather,” he said, noting that he stays in touch with his mother in Saskatoon via Facebook Messenger. “I was standing on my balcony and I was thinking, ‘Why am I sitting indoors?’ – but of course you have to be.”

However, as Bishop Kenneth pointed out, “we’re in Lent right now – we’re in the Great Fast – and so for Catholics around the world it is a time in general for sacrifice.”

“I certainly didn’t expect that what I would be giving up for Lent is freedom and the ability to move about. But I am turning it into a spiritual exercise,” he mused.