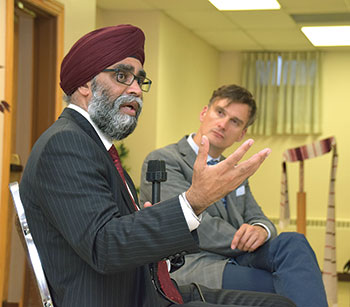 Canada’s defense minister, Harjit Sajjan, with Yaroslav Baran, president of the Ottawa branch of the Ukrainian Canadian Congress, who served as moderator of the town hall meeting.

OTTAWA – Canada is in no rush to equip Ukraine with long-requested weapons in its fight against Russian-backed separatist forces, Canada’s national defense minister told a Ukrainian Canadian audience here on June 21.

Canada’s goal in providing military assistance to Ukraine is to “de-escalate the conflict” and not “create any more suffering” for Ukrainians, Harjit Sajjan said at a town-hall meeting at St. John the Baptist Ukrainian Catholic Shrine that was organized by the Ottawa branch of the Ukrainian Canadian Congress (UCC).

But several attendees asked the minister whether the Canadian government would go beyond its military training mission, and, as one questioner raised, provide Ukraine with arms, not soldiers as Canada has been sending to help train Ukrainian soldiers since 2015 – a mission that earlier this year was extended to 2019.

Mr. Sajjan said that “going down the path” of helping to arm Ukraine could lead to a “full-scale war” with Russia.

A retired lieutenant-colonel in the Canadian Armed Forces who became the first person of color to serve as defense minister when Prime Minister Justin Trudeau appointed him to his Cabinet in 2015, Indian-born Mr. Sajjan was also the first Sikh to command a Canadian reserve regiment. He served overseas in Bosnia-Herzegovina and on three tours of duty to Kandahar in Afghanistan.

Rather than discussing the possibility of lethal aid at the town hall meeting, the minister focused on what Canada is doing to help protect Ukrainian sovereignty and security, particularly through a bilateral Defense Cooperation Agreement he signed in April with his Ukrainian counterpart, Stepan Poltorak.

At the signing ceremony, held at National Defense headquarters in Ottawa, Mr. Sajjan said the pact “demonstrates just how strongly Canada is committed to Euro-Atlantic security and our unwavering support for Ukraine.”

The agreement enables Ukrainian soldiers to train with their Canadian counterparts on joint exercises in Canada and facilitates officer exchanges between both countries.

In a briefing note to Canadian members of Parliament last year, the UCC called on Ottawa to add Ukraine to the Automatic Firearms Country Control List “to allow the export of certain defensive equipment to Ukraine.”

Adding Ukraine to that list, Mr. Sajjan told reporters at the April signing ceremony, would be “the next step” and “worked through” Global Affairs Canada, which is headed by Foreign Affairs Minister Chrystia Freeland, a Ukrainian Canadian.

He told the town hall meeting that it is Ms. Freeland’s “responsibility” to take the next steps in advancing the Canada-Ukraine relationship.

Earlier this month, she unveiled Canada’s foreign-policy priorities against the backdrop of the Trump administration’s approach.

“The fact that our friend and ally has come to question the very worth of its mantle of global leadership puts into sharper focus the need for the rest of us to set our own clear and sovereign course,” Minister Freeland told the House of Commons on June 6. “For Canada, that course must be the renewal, indeed the strengthening, of the post-war multilateral order.”

She explained: “Canadians understand that, as a middle power living next to the world’s only superpower, Canada has a huge interest in an international order based on rules. One in which might is not always right; one in which more powerful countries are constrained in their treatment of smaller ones by standards that are internationally respected, enforced and upheld.”

Ms. Freeland said the “single most important pillar of this, which emerged following the carnage of the first and second world wars, is the sanctity of borders – and that principle, today, is under siege.”

And that is why “the democratic world has united behind Ukraine,” she explained. “The illegal seizure of Ukrainian territory by Russia is the first time since the end of the second world war that a European power has annexed by force the territory of another European country. This is not something we can accept or ignore.”

Andriy Shevchenko, Ukraine’s ambassador to Canada, said he considers Minister Freeland’s speech an articulation of “Canada adjusting to its new role after the U.S. election,” in which she acknowledged that many voters cast their ballots for president “animated in part by a desire to shrug off the burden of world leadership.”

Mr. Shevchenko said in an interview prior to Minister Sajjan’s town-hall meeting that Ukraine would now like to see “much more leadership” from Canada.

“The political class of the U.S. and Canada is so interconnected that we would really like Canadian politicians to share what they know about Ukraine with the new U.S. administration and help it understand what is happening in our part of the world,” Ambassador Shevchenko commented, adding that he remains hopeful that Canada will help provide Ukraine with defensive weapons.

Mr. Sajjan said that he and Ms. Freeland raise the issue of Ukraine “at every opportunity” and that another important way Canada is trying to deter Russian aggression is through a multinational NATO battle group it’s leading in the Baltic region.

The first group of 450 Canadian soldiers arrived in Latvia earlier this month.

When asked at the town hall meeting whether Canada is promoting Ukraine’s inclusion in NATO, Minister Sajjan said that pursuing membership in the alliance was a choice left for Ukrainians but that Canada would back whatever decision they make.

He also highlighted a Canadian initiative that should be of interest to Ukraine, which, according to the headline of a recent Wired magazine story, has become “Russia’s test lab for cyberwar.”

On June 20, the Canadian government introduced national-security legislation in the House of Commons. Among the features of Bill C-59 is a provision that would empower the Communications Security Establishment (CSE) – a federal agency that reports to Minister Sajjan – to assist his department in conducting cyber operations that “degrade, disrupt, influence, respond to or interfere with the capabilities, intentions or activities of a foreign individual, state, organization or terrorist group as they relate to international affairs, defense or security.”

Those initiatives come against the backdrop of a recently released unclassified CSE report that warns the next Canadian general election, on October 21, 2019, will likely face cyber attacks from “multiple hacktivist groups” that seek “to influence the democratic process.”

Although Russia, which has been implicated in interfering in last year’s U.S. presidential election, is not named, the CSE states that “a small number of nation-states have undertaken the majority of the cyber activity against democratic processes worldwide, and we judge that, almost certainly, they are the most capable adversaries.”

Whether nation-states attempt to influence the 2019 election will depend on how they “perceive Canada’s foreign and domestic policies and… the spectrum of policies espoused by Canadian federal candidates,” said the report.