OTTAWA – As a journalist, and as a woman, Chrystia Freeland would have relished the opportunity to write about the appointment of the first female finance minister in Canadian history. But as a politician, it is 52-year-old Ms. Freeland who has made history as that person – with the added point that she is the first Ukrainian Canadian to serve in that role and now unquestionably the second-most powerful and influential member of the Canadian government after Prime Minister Justin Trudeau. 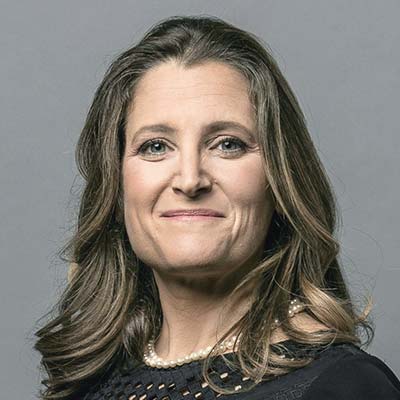 It was the prime minister who, on August 18, added the finance portfolio to the Cabinet responsibilities of Ms. Freeland, already Mr. Trudeau’s deputy prime minister, following the sudden resignation, the day before, of Finance Minister Bill Morneau, who has been embroiled in a controversy over his ties to the WE Charity.

Holding the dual roles of deputy prime minister and finance minister itself is somewhat of a rarity.

Her rise to a most consequential position in the Canadian government has occurred over less than a decade.

A star recruit by the Liberal Party of Canada, Ms. Freeland left a successful international career in journalism and entered politics in 2013 when she ran for and won a seat in the House of Commons to represent the federal riding of Toronto Center (most recently held by Mr. Morneau) when the Liberals were in opposition.

Following a change in the electoral boundaries map, Ms. Freeland became the member of Parliament for the newly created Toronto riding of University-Rosedale after winning the seat in the 2015 general election, which brought the Justin Trudeau-led Liberals to power to form a majority government, and again in 2019, when the Liberals were re-elected, but were reduced to governing with fewer MPs.

It was clear from the start that Ms. Freeland was viewed by Prime Minister Trudeau as a significant member of his Cabinet.

Halfway through the Liberals’ first term, she was promoted from holding the international trade portfolio to become Canada’s foreign affairs minister with the continuing task of managing the Canada-U.S. relationship during the often-tense talks of renegotiating the North American Free Trade Agreement with President Donald Trump’s administration.

Last year, Ms. Freeland was appointed deputy prime minister and was also named intergovernmental affairs minister, responsible for the federal relationship with Canada’s 10 provinces and three territories – a role that has required unprecedented collaboration during the COVID-19 pandemic.

“It has been the formulation and development of Chrystia Freeland into a real force in the sense that she is able to take on any challenge, and definitely demonstrates her breadth of abilities in that she is able to learn a file and dive deep into it,” said Paul Grod, the Toronto-based president of the Ukrainian World Congress. He has known Ms. Freeland for the past decade, makes it a point to speak Ukrainian with her and touts her fluency in the language.

(The deputy prime minister also speaks Russian and Italian, along with French, Canada’s other official language.)

“She has a lot of skills, and I think she’s going to be fabulous in the role of finance minister. She certainly has a good understanding of finance having been a reporter for the Financial Times,” Mr. Grod said in an interview.

Early in her career, the Alberta-born. Harvard-and-Oxford-educated Ms. Freeland was a Ukraine-based stringer for the Times, The Washington Post and The Economist, before serving in senior editorial roles at both the London-based Financial Times and the Toronto-based Globe and Mail.

Ms. Freeland’s immediate predecessor on the Cabinet finance file, Mr. Morneau, was a businessman before entering politics and ran Morneau Shepell, a major Canadian human-resources services company. Ms. Freeland’s involvement in the business world was as a journalist writing about it.

But that poses no disadvantage to her as Canadian finance minister, as Mr. Grod explained. “In Canada, ministers are not necessarily chosen because they’re experts in an area because there is a professional public service that manages and leads the files and an elected official oversees and provides policy direction. And [Ms. Freeland] has demonstrated her ability to be very ethical, very disciplined and very thoughtful in what she does.”

“Every challenge she has taken on, whether it’s international trade, foreign affairs, dealing with COVID in Canada, she’s been phenomenal,” Mr. Grod said.

He noted that Deputy Prime Minister Freeland’s ability to reach out in a non-partisan, collegial manner has earned her widespread respect from MPs across party lines.

That point was punctuated when Doug Ford, the conservative premier of Canada’s largest province, Ontario, and initially more critical than supportive of the Trudeau government in its early days, offered congratulations to his “good friend Chrystia Freeland” on the day she was sworn in as finance minister.

“She’s just an amazing person,” he said. “I don’t know how she’s going to do it – she’s working around the clock now. But there’d be no one better in that role than Chrystia Freeland,” Mr. Ford commented.

The Business Council of Canada (BCC), which represents companies that employ 1.7 million Canadians, was also effusive in its praise of the deputy prime minister.

“Since entering the federal Cabinet in 2015 and while serving in the portfolios of international trade, foreign affairs, intergovernmental relations and deputy prime minister, you have worked tirelessly to strengthen Canada at home and abroad. We know that you will bring the same high level of commitment to your new role as minister of finance,” wrote the council’s president, Goldy Hyder, in an August 18 letter that outlined concerns that will be Ms. Freeland’s.

Canada’s deficit is expected to reach $343 billion ($260 billion U.S.), or about 16 percent of the country’s GDP, a fiscal picture unmatched in Canadian history.

Following Ms. Freeland’s installation as finance minister, Prime Minister Trudeau told reporters at an Ottawa news conference that since her first election as an MP, he has talked with her “about how we need to create a fairer country for Canadians [and] how we need to grow the economy in ways that help everyone,” adding that she wrote a book on the subject, “Plutocrats: The Rise of the New Global Super-Rich and the Fall of Everyone Else,” published in 2012.

“As we look to building a better, more fair Canada that is prosperous and creating real opportunity for everyone, I can think of no one who is better suited to work alongside me and the rest of this amazing [Liberal] team as our finance minister to build that better future for Canadians,” Mr. Trudeau said.

Newly minted Finance Minister Freeland amplified the prime minister’s remarks, when she said at the same news conference that the restart of the Canadian economy needs to be “equitable,” “inclusive” and “green,” the latter approach of which was reportedly resisted by Mr. Morneau.

Ms. Freeland also noted how the economic challenge caused by the COVID crisis has hit “women particularly hard,” and how she will be able to bring her experience “as a woman, as a mother [of three]” in confronting that issue as finance minister.

Ukrainian Canadian Congress (UCC) President Alexandra Chyczij said she believes that Prime Minister Trudeau “has tapped into the most talented member of his Cabinet” and is “leveraging [Deputy Prime Minister Freeland’s] considerable skills to get Canada through this crisis.”

Ms. Chyczij expects that one day Ms. Freeland will be Canada’s prime minister, “and that’s something the Ukrainian Canadian community would wish for fervently.”

“She certainly has the skill and experience that would equip her for that role. But I know she’s a loyal team player, and that in absence of a leadership review, the Trudeau team will likely stay intact with Chrystia playing a very key role,” she added.

Ms. Chyczij, a lawyer by profession, recalls first meeting Ms. Freeland in Kyiv in 1991 when the young and intrepid journalist was covering a news conference at the Verkhovna Rada in newly independent Ukraine. Ms. Chyczij had stopped by to witness the back-and-forth with reporters while attending a conference of Canadian and American lawyers of Ukrainian descent in the Ukrainian capital.

“Chrystia is scary smart,” said Ms. Chyczij. “She was a Rhodes scholar and is a fantastic critical thinker, and over the years has displayed a curiosity that has been an education in it of itself.”

“In her journalistic work, she has encountered some of the brightest and most talented people on the planet, and has absorbed something from all of them. I think she has a great Rolodex that she can call upon at any point in time for advice for perspective. She has a resource network around her that is unparalleled,” the UCC leader pointed out.

Mr. Grod, a former UCC president, echoed those comments. “[Ms. Freeland] has a Rolodex like no other of the most influential financial-policy and business elites, and a stronger Rolodex than the previous finance minister, globally,” he said, citing such names as Larry Summers, who served as U.S. treasury secretary in President Bill Clinton’s administration, and billionaire investor and philanthropist George Soros.

“She’s going to be able to, just as she did in foreign affairs, open up more doors than anybody else in Canada can, globally. That’s going to impact Canada’s financial reach, and I suspect we’ll become a bigger player in multinational arenas like the World Bank, the OECD [the Organization for Economic Co-operation and Development, which Mr. Morneau hopes to lead as its next secretary general],” Mr. Grod observed.

“It’s going to put us on the map in a lot of areas where we have not been on the map, and bode very well for Canada,” continued Mr. Grod, who also highlighted the absence of any reaction from Ms. Freeland’s ancestral homeland on her historic appointment as Canadian finance minister.

“I’m really disappointed in the Ukrainian government – in [President Volodymyr] Zelenskyy and his team that they have not capitalized on her and her ability to open doors, because she can open more doors for Canada and she can certainly open a lot of doors for Ukraine. And they’ve not taken advantage of that.”