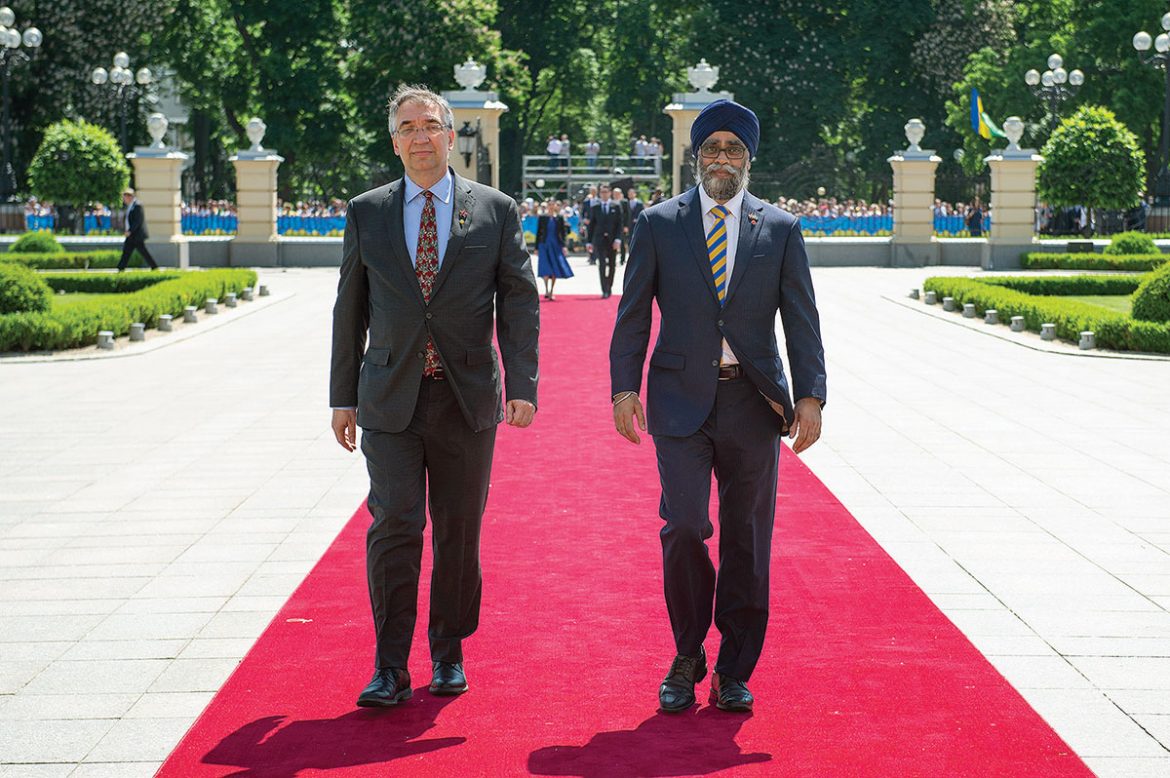 Canadian Defense Minister Harjit Sajjan (right) and Canadian Ambassador to Ukraine Roman Waschuk walk toward the Mariyinsky Palace, where heads of foreign delegations and ambassadors were hosted at a reception.

OTTAWA – Volodymyr Zelensky’s bold decision to dissolve the Verkhovna Rada and push the parliamentary election ahead from October to July a day after he was sworn in as Ukraine’s sixth president could have been lifted off the script from “Servant of the People,” the popular Ukrainian comedy series that made the current head of state a television star.

While taking a wait-and-see approach, Canadian government and Ukrainian community officials don’t expect the 41-year-old erstwhile actor and current populist politician to upend the Ukraine-Canada relationship as he did with Ukraine’s political establishment on TV, based on their initial contact with the newly minted president.

“In terms of the direction that the president and his new administration want to take, we look forward to hearing their vision so that Canada can evolve its support based on their needs,” said Canadian Defense Minister Harjit Sajjan, who represented the Canadian government at Mr. Zelensky’s presidential inauguration on May 20 in Kyiv and later had a bilateral meeting with Ukraine’s new head of state.

“Instead of us trying to dictate what we think they need, we’re there to provide support for what they require,” he added.

Mr. Sajjan said the president thanked Canada for its military training mission in Ukraine, Operation UNIFIER, which has been extended to March 31, 2022.

The defense minister told The Ukrainian Weekly that Canada is the lead country in providing troops for training and “capacity building” in Ukraine.

Since the start of the mission in September 2015, the Canadian Armed Forces have trained over 11,000 Ukrainian defense and security forces members to be “self-sufficient in their training delivery and in the conduct of military operations,” according to a backgrounder from Minister Sajjan’s office. About 200 Canadian soldiers are deployed to Ukraine in six-month rotations as part of Operation UNIFIER.

“We’ve expanded our role as to where we do the training,” explained Mr. Sajjan. “Instead of having the troops come to us, we have 10 locations where Canadian Armed Forces personnel will conduct the training. This provides tremendous flexibility – but also the training is mutually determined as to what is needed.”

The defense minister’s visit to Ukraine followed one made earlier in May by Foreign Affairs Minister Chrystia Freeland, a Ukrainian Canadian, who met not only with Mr. Zelensky, but also with Ukrainian Prime Minister Volodymyr Groysman and Foreign Affairs Minister Pavlo Klimkin, who have both announced their intention to leave their posts following Mr. Zelensky’s inauguration as president.

Operation UNIFIER is providing Ukrainian soldiers with medical training on casualty evacuation and first-aid; helping them build a command-and-control structure for their units; and is involved in military police training on the use of force and basic investigative techniques, according to Mr. Sajjan, who said that he witnessed Ukrainians’ appreciation of Canada’s efforts.

“When I left the presidential inauguration, Ukrainians recognized us,” he said. “The tremendous cheers that came from the crowd demonstrated to me that they acknowledge that Canada will always be with them.”

Although he didn’t single out Canada, President Zelensky acknowledged the Ukrainian diaspora in his inaugural address during a special session of the Verkhovna Rada. “We really need you,” he said, offering to grant Ukrainian citizenship to those willing to bring their “knowledge, experience and values” to Ukraine.

But Ukrainians living abroad don’t necessarily have to come to Ukraine to support the country, as the president was told in a briefing on the Ukrainian diaspora from the man who represents that global community.

“I explained to him that we focus on educating and raising conscientious Ukrainians around the world, and we do that through strong institutions that care for the community from cradle to grave,” said Paul Grod, the Canadian-based president of the Ukrainian World Congress (UWC), who met with President Zelensky on May 21 and attended the presidential inauguration the day before as a representative of the sole international non-governmental organization invited to attend the ceremony.

“I explained to him that when you’re born into a Ukrainian family you’re baptized in a Ukrainian church; you go to a Ukrainian daycare and school; you belong to Ukrainian youth organizations, student clubs, sporting groups, cultural groups, dance groups, professional associations, right through to Ukrainian care centers and even Ukrainian cemeteries. There’s a whole life cycle,” said Mr. Grod, former president of the Ukrainian Canadian Congress, in an interview.

“His eyes were completely wide open. He was taken aback by that level of organization,” Mr. Grod observed.

Mr. Grod said that he also told President Zelensky about the advocacy work conducted by the UWC to secure support for Ukraine from Western countries, such as the United States and Canada.

“It doesn’t happen because they just like Ukraine. It happens because there’s a strong organized diaspora that encourages governments to be strong advocates of Ukraine,” said Mr. Grod, a lawyer who heads Rodan Energy Solutions, a North American energy-management company.

“I reassured him that, as we’ve worked with every president since independence, we will work with him because we want to make sure that Ukraine is successful,” Mr. Grod told The Weekly.

“We’ve done a lot of work promoting investments into Ukraine, and helping promote the development of new markets for Ukrainian businesses – whether it’s encouraging and helping support free-trade agreements, or through various chambers of commerce that we set up around the world,” Mr. Grod explained.

“Because Ukraine is a parliamentary-presidential democracy, Zelensky’s responsibilities are limited constitutionally to foreign affairs, defense and national security. He’s the key person on foreign affairs, so he needs to know who we are so we can work effectively together,” the UWC president noted.

But Mr. Grod also warned the president to not “throw out the baby with the bathwater” following the scathing comments he made in his inauguration address about “pompous” politicians, who over the 28 years since Ukraine gained its independence, “have created a country of opportunities – the opportunities to bribe, steal and pluck the resources.”

“Ukraine has made considerable progress, and to say that everything was bad and corrupt, and that all politicians are useless was inappropriate. But he is running a political campaign and preparing for the parliamentary election,” said Mr. Grod, who added that he illustrated to the president some of the reforms that have been made, such as in health care through the Cabinet minister responsible, Ulana Suprun, an American physician who moved with her husband to Ukraine in 2013 to participate in the Ukrainian Revolution of Dignity.

Mr. Grod’s point dovetailed nicely into President Zelensky’s call for Ukrainian expatriates “to return home,” and to that end, the two discussed how that could happen.

“We got into dual citizenship, which he was supportive of,” said Mr. Grod. “We agreed that we would work together and present him with several models to consider.”

“We need to help him get past the rhetoric because he’s a green politician,” said Mr. Grod, noting the pun in reference to President Zelensky’s family name, which is rooted in the Ukrainian word meaning green.

“He needs as much advice as possible, and it’s important that he has the right people giving him advice. And that’s what I see as the role of the Ukrainian World Congress – to continue to encourage him to do what we think is the right thing and tell him when he’s not doing the right thing.” 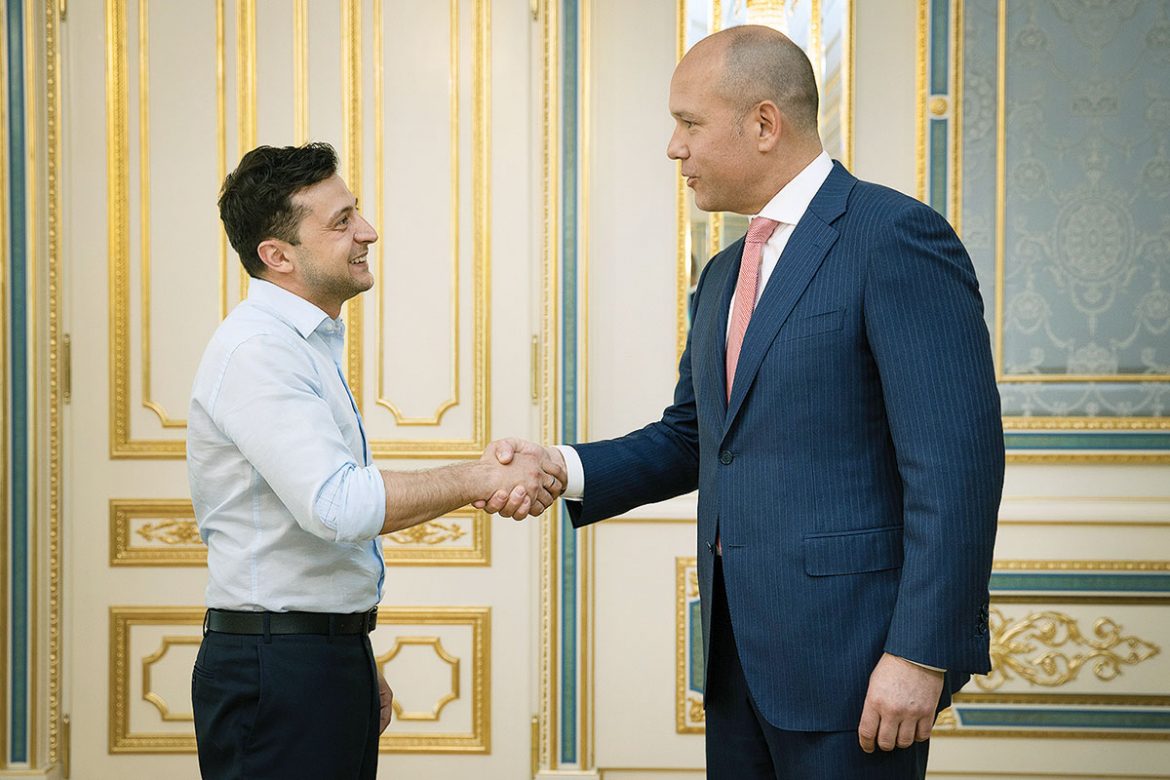 At a meeting on May 21 with the delegation of the Ukrainian World Congress, President Volodymyr Zelensky welcomes UWC President Paul Grod.

Mr. Grod said he is concerned about some members of President Zelensky’s inner circle, most notably his chief of staff, Andriy Bohdan, who recently floated the idea of holding a national referendum on negotiating a peace agreement with Russia. “Zelensky later toned it down by saying it was more to seek public opinion,” said Mr. Grod, who pressed the importance of taking a firm stance against the Kremlin in his meeting with President Zelensky, which lasted 45 minutes, or about 25 minutes more than what was scheduled.

“We need him to make it very clear to the international community that he is not going to trade or barter with the Donbas or Crimea, and that he is going to stand up to Russian aggression,” explained Mr. Grod.

As for Mr. Bohdan, he said the more troubling issue is his association with “shady” Ukrainian billionaire oligarch Ihor Kolomoisky, who as co-owner of Ukraine’s largest financial institution, PrivatBank, “drove it into bankruptcy” and led to the Ukrainian government providing a $5.6 billion bailout at a time Kyiv was receiving international financial assistance.

Mr. Kolomoisky is also the majority owner of 1 + 1 Media Group, whose 1+1 TV channel ran Mr. Zelensky’s “Servant of the People.”

Meanwhile, Mr. Bohdan, who acted as Mr. Kolomoisky’s lawyer, is facing calls to resign as the head of President Zelensky’s administration in light of Ukraine’s lustration law that bars civil servants who served in disgraced former President Viktor Yanukovych’s administration from holding government positions. Mr. Bohdan twice served as the Yanukovych administration’s representative on anti-corruption policy as deputy minister of the Cabinet of Ministers.

However, President Zelensky’s potential save is that he tapped Vadym Prystaiko, the deputy minister of foreign affairs who previously served as Ukraine’s ambassador to Canada, as his deputy chief of staff. “He’s a very capable and seasoned diplomat,” said Mr. Grod.

From the Canadian government perspective, Minister Sajjan remains optimistic about the future of the bilateral relationship.

“We will have to wait, like everybody else, to see the vision of President Zelensky and his administration,” he said. “At the end of the day, we will be a good ally of Ukraine, and denounce the illegal annexation of Crimea and what Russia is doing in the Donbas. We will work with Ukraine to make sure they move toward their reforms.”

Minister Sajjan added that President Zelensky said he hopes to attend the Ukraine Reform Conference to be held in Toronto from July 2 to 4.

From the diaspora view, Mr. Grod is more cautious in his outlook.

“There could be a completely new political dynamic in Ukraine, which could be very ominous or could be a new breath of fresh air that brings the change that everybody wants,” he explained.

“I’m a little skeptical of the latter – that this is going to be a whole new reformist, clean group coming in that are going to move quickly and make the change that the old guard couldn’t do. I’m not that naïve to think that it will be that straightforward.”