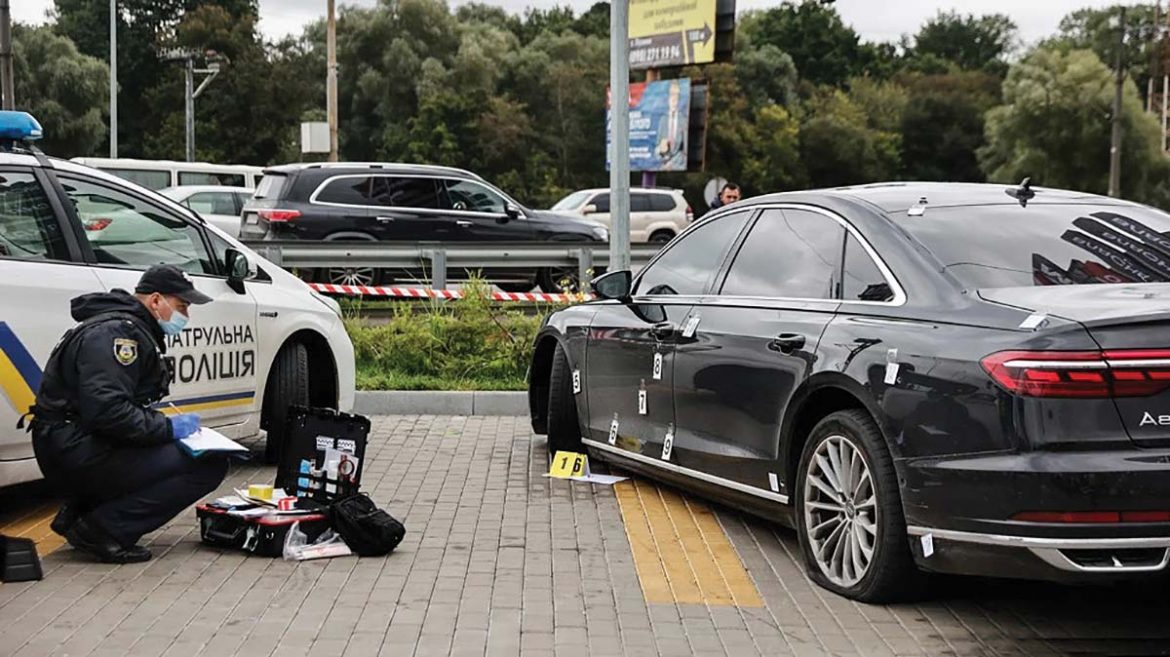 The vehicle in which presidential aide Serhiy Shefir was riding is seen with bullet holes following an assassination attempt on September 22.

KYIV – At about 10 a.m. on September 22, one or more shooter fired a volley of at least 18 bullets from the woods at a black, four-door Audi sedan along the road between the villages of Lisnyky and Khodosivka in Kyiv Oblast.

Inside the vehicle was the president’s top aide, Serhiy Shefir, and a driver. The unidentified driver was shot three times and hospitalized in critical condition while Mr. Shefir survived unscathed.

“The purpose of this crime was not to scare, but to kill,” Interior Affairs Minister Denys Monastyrsky said at a joint briefing the same day with Mr. Shefir.

“Greeting me with shots from the forest at my friend’s car is a weakness. But the response will be forceful,” President Volodymyr Zelenskyy said about the assassination attempt from New York where he was attending the 76th U.N. General Assembly.

Police said they were probing three possible motives for the attack. They believe it could have been an effort to instill fear in the country’s leadership as it promotes policies to reduce the power of oligarchs, an attempt to destabilize the political situation in Ukraine, or it could have been an attack orchestrated by a foreign intelligence service.

The attempt on the life of Mr. Shefir, 57, who is a longtime friend and former business partner of the president, comes amid Mr. Zelenskyy’s moves to reduce the sway of oligarchs over politics and the economy.

It also occurred the same day when Mr. Zelenskyy delivered a passionate speech at the U.N. where he called out shortcomings in areas from equitably sharing coronavirus vaccines to halting climate change to failing to reverse Russia’s annexation of Crimea and occupation of certain areas of eastern Ukraine.

The incident in Kyiv prompted Mr. Zelenskyy to cut short his visit to the U.N. in New York and return to Ukraine.

Since Russia invaded Ukraine in 2014, there have been numerous assassination attempts carried out on Ukrainian territory targeting senior military and intelligence officials and politicians, as well as journalists and dissidents fleeing enemies in Russia.

Ukrainian officials have attributed some of the attacks to people associated with Russia’s intelligence services.

Earlier this month, a female and male were killed in a car explosion in Dnipro, the country’s fourth largest city. Their relationship was unknown but the Security Service of Ukraine (SBU) is investigating their deaths as a terrorist act.

The female victim was Darya Hrechysheva who was the spokesperson for the local unit of the Emergency Services Ministry. She was a volunteer for the Red Cross Society and member of a local patriotic civil society group.

The male victim, Oleksiy Kavlak, was a member of the Ukrainian Legion and former medical care instructor in the war zone in eastern Ukraine.

Some car blasts have been prevented.  In one instance on July 29 in easternmost Luhansk Oblast, an explosive device was found underneath a vehicle of an SBU officer in Severodonetsk. It was first noticed when the agency-issued car arrived at the SBU’s headquarters after having travelled to the Donetsk and Luhansk regions of Ukraine.

High profile assassinations since 2014 have impacted the officer corps, political elites and journalists. 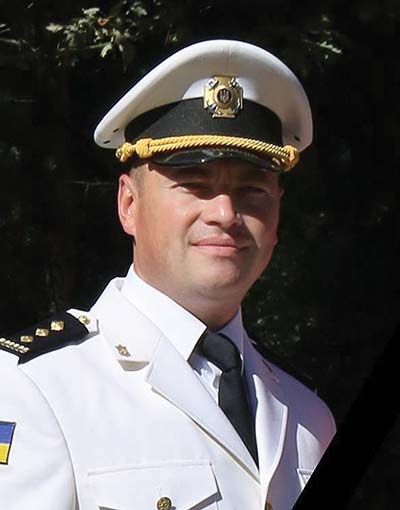 Maksym Shapoval, a decorated military intelligence colonel died in a car blast in Kyiv on June 27, 2017. The incident was classified as a terrorist act and is still unsolved.

Mr. Shapoval was the head of the special operations unit of Ukraine’s military intelligence at the start of the Russia-instigated war in April 2014.  On May 26 of that year, Mr. Shapoval took part in an operation to free the Donetsk airport from Russian-armed formations.

His unit would go on to apprehend Russian mercenaries who were later part of prisoner exchanges that returned Ukrainian military personnel to Ukraine. Other operations were carried out to kill Russian operatives on Ukrainian territory. 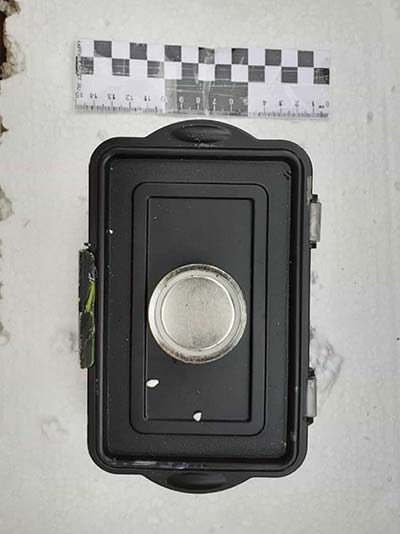 An explosive device was found underneath an SBU officer’s vehicle in Severodonetsk. It was first noticed on July 29 when the agency-issued car arrived at the SBU’s headquarters after travelling from the Donetsk and Luhansk regions of Ukraine.

Mr. Maksymov left behind a wife, daughter and son. He was posthumously promoted to the rank of major-general and given the Hero of Ukraine award by then-President Petro Poroshenko.

Another valuable officer lost to a car explosion was SBU Col. Oleksandr Kharaberyush, who had been described “as a highly effective counterintelligence officer.”

He is credited with apprehending some 60 Russian agents and terrorists in operations in which he often took part. The Donetsk native was killed in a blast on March 31, 2017, in the Azov Sea port city of Maripuol.

A woman in May 2017 was arrested as a suspect in Odesa for planting the explosives underneath the SBU colonel’s car.

An attempt was made on April 4, 2019, on military intelligence Maj. Kyryl Budanov. Mr. Budanov survived and continues to serve.

A suspected group of saboteurs from Russia attempted to plant an explosive device underneath his vehicle but it detonated during the process. Russian national Aleksei Komarichev was severely wounded. The SBU later detained another Russian citizen, Timur Dzortov, “and several others from an FSB network that helped [the Russians] in Ukraine,” Liga.net reported at the time.

Belarusian-born journalist Pavel Sheremet – whose reports criticized the despotic rule of his homeland and Russia – was also killed in a car blast in July 2016 in Ukraine’s capital. His case is still unsolved and three suspects, all Ukrainians with ties to the war in the east, are under different forms of house arrest or restrictive measures beyond jail.

And in June 2017, the same month of Mr. Shapoval’s death, a man from Russia’s Chechnya region shot and wounded in Kyiv Adam Osmayev, a compatriot who had fought on Ukraine’s side in the Donbas war.

The victim’s wife shot the attacker, who was posing as a French reporter wishing to interview the couple.

A former Russian lawmaker critical of the Kremlin, Denis Voronenkov, was shot dead in broad daylight near a five-star hotel in downtown Kyiv on March 23, 2017. A bodyguard shot his Russian assailant who later died of his wounds in a hospital.

Mr. Poroshenko, who was president at the time, called the killing an “act of terrorism” while pointing the finger at Russian authorities.