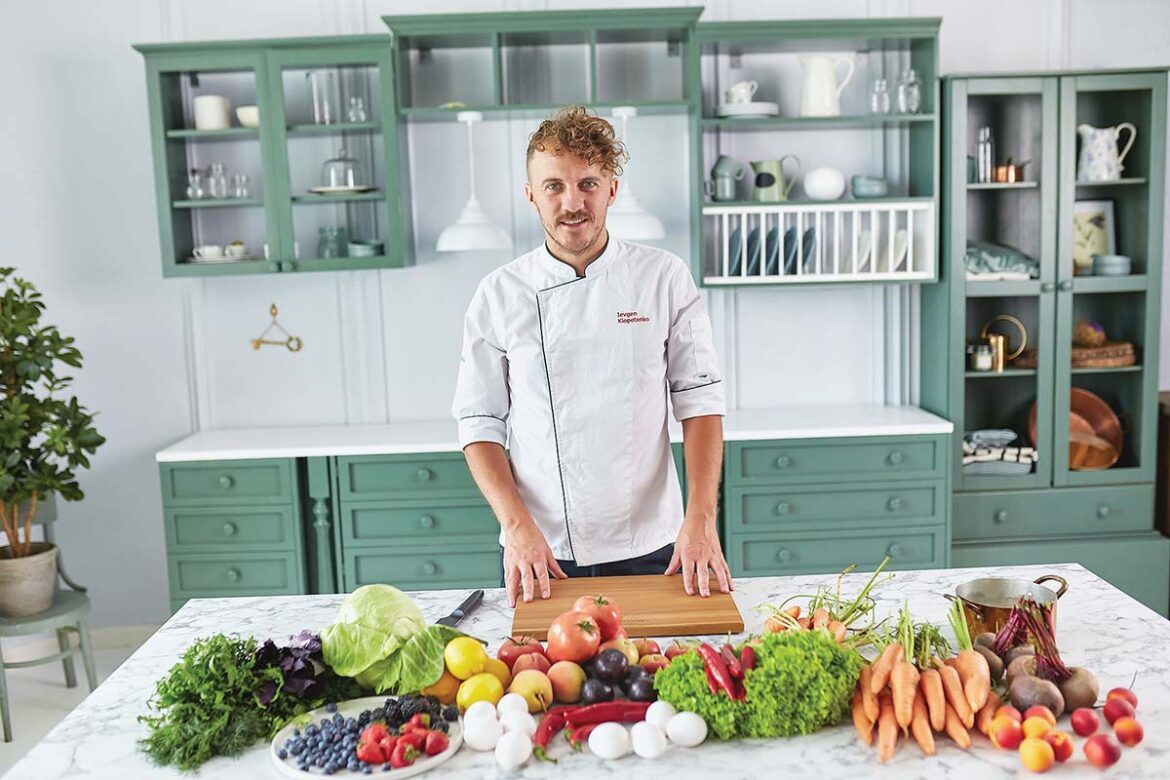 Through his cooking and social campaigns, Mr. Klopotenko, 33, is on a mission to revive centuries-old Ukrainian recipes, modernize them and show Ukrainians their rich heritage through food.

To do this, the former Ukrainian Master Chef winner researched what people ate before the Bolsheviks took over after World War I and started standardizing food menu items at eateries, schools and health-care facilities.

“I want to show that Ukrainian cuisine exists and 70 years under the USSR was a dark moment in our history,” Mr. Klopotenko said. “The Soviets did away with [many] Ukrainian dishes because they were creative, and if you don’t kill creativity, a revolution is possible.”

His research eventually led him to Ukrainian poet and writer Ivan Kotliarevsky in whose works the chef found “148 names of dishes,” many of which he never heard.

For example, “I started digging deeper in the unique technique of cooking meat in beetroot kvas – beets are in our veins,” he said.

At his co-owned restaurant, named 100 Years Back to the Future (https://100rokiv.com.ua/), Mr. Klopotenko has a staple of 15 authentic Ukrainian menu items and changes five to six other items every few months.

He favors local ingredients in the true farm-to-table approach.

Farmers and foresters bring him tree moss, purslane – a low, trailing plant having yellow flowers, venison, seeds of wild carrots and a form of oregano called “materynka” that is found in Ukrainian forests. Mr. Klopotenko uses materynka on his baked ribs dish, which is served with a kvas sauce made from rye bread for about $7.

At pharmacies, Mr. Klopotenko purchases healing herbs and incorporates them in his recipes.

Diners can also “construct 15 types of different borshch” at his restaurant, which include such varied ingredients as carp, spicy beef or wild mushrooms. 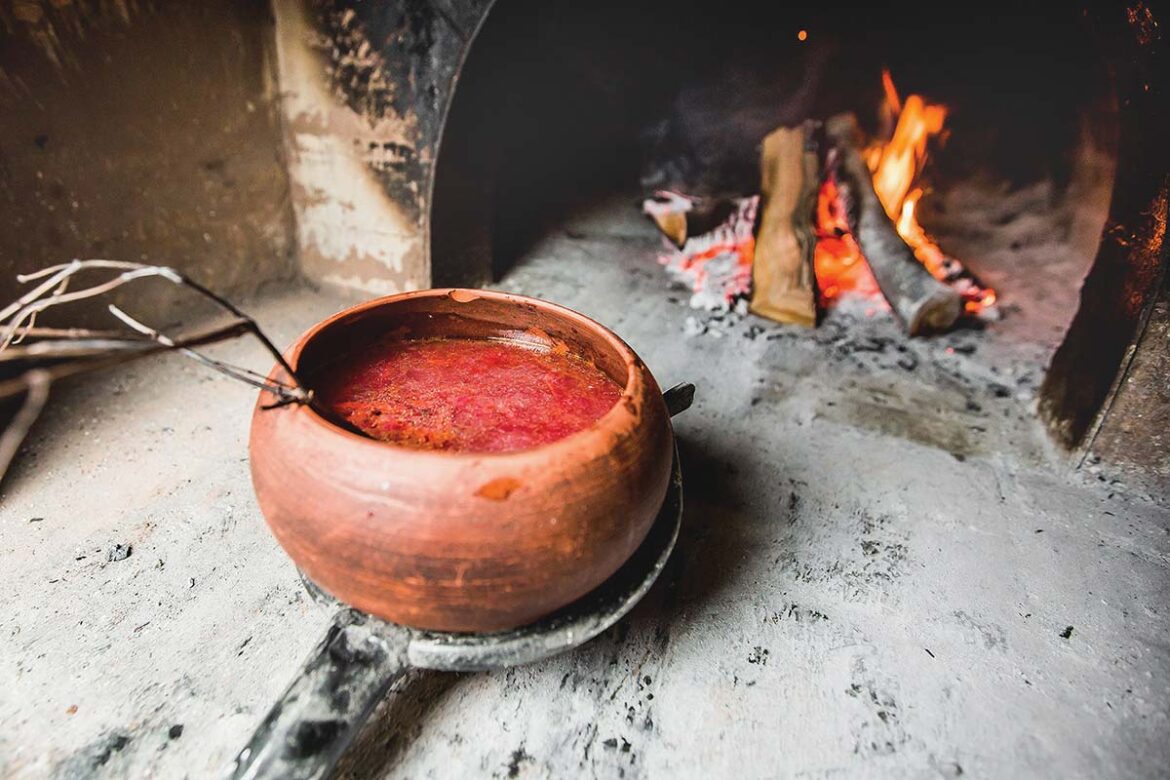 The borshch that is served at chef Yevhen Klopotenko’s Kyiv restaurant, 100 Years Back to the Future.

Two years of painstaking documentation and research through Mr. Klopotenko’s non-profit Institute of Culture of Ukraine culminated three weeks ago when an expert council at Ukraine’s Ministry of Culture voted to include borshch on the list of “elements of intangible cultural heritage.”

The next step, the chef said, is to get the United Nations Educational, Scientific and Cultural Organization (UNESCO) to recognize the hearty soup on its Intangible Cultural Heritage list.

It won’t mean the claim will be exclusive to Ukraine.

The endeavor started more than two years ago when a Ukrainian lady living in Slovenia sent Mr. Klopotenko a picture from a shop that showed jars of borshch being sold labeled as “Russian soup.”

“That triggered something inside me,” the Kyiv native said.

Just like the “war with Russia, we have a very big problem in our heads,” said Mr. Klopotenko, who was a Russian speaker, but now speaks in Ukrainian.

Using his own money, he hired five people to conduct expeditionary trips throughout Ukraine to document and film how different families make the soothing soup in accordance with what the Ministry of Culture required for inclusion on its national heritage list.

“It involved more than a year of daily and monotonous work,” he said on Facebook. “It wasn’t about creativity, it was about following the rules, and this was the first time that a Ukrainian dish could be called Ukrainian.”

Eventually, Chumak, a Ukrainian tomato product company, financed additional research trips so that he could complete the exhausting work.

On the day of the expert council’s vote, October 6, Mr. Klopotenko said he took five liters of homemade borshch, set it on the table and told them that “we need to recognize this today.”

He added: “It had a powerful psychological effect… there are no unique recipes of borshch, every recipe is different, all that matters is the person who makes it unique.”

Mr. Klopotenko’s grandmother invited him to live with her for six months in England in 1991, the year that Ukraine regained independence amid the Soviet Union’s implosion. There, his path toward discovering the world of the culinary arts started.

“I was amazed at the different culture of cooking and what foods were available in supermarkets,” he said.

Half-year visits or working stints followed in Italy, Germany and the U.S., where his palate grew in sophistication and his work experience included back kitchen work and even doing food preparation at McDonald’s.

He returned to Ukraine permanently late in the last decade with a different approach to food: “I started tasting food like a chef does – not only if it’s tasty or not – but what ingredients are used with the goal of replicating the taste.”

Back in Kyiv, Mr. Klopotenko started working at restaurants mostly as a server or manager. Then, one day, after seeing how another “inexperienced chef” was cooking a meal, he decided to embark on a cooking career.

By then, Mr. Klopotenko was a self-described “foodie who cooked at home” and already running a business selling jams in jars, another Ukrainian pastime.

He subsequently entered the amateur Master Chef competition that he won in 2015 – an experience that left a bitter taste in his mouth.

In the competition, “you have to be a good cook and a showman,” Mr. Klopotenko said, adding that “it’s very hard.”

All the participants “hated” him, he said, while Mr. Klopotenko spent 76 days living in a hotel with “enemies” as he advanced to the final stage of the competition, which afforded him free courses in cuisine the following year at the Paris-based Le Cordon Bleu culinary school that he completed. 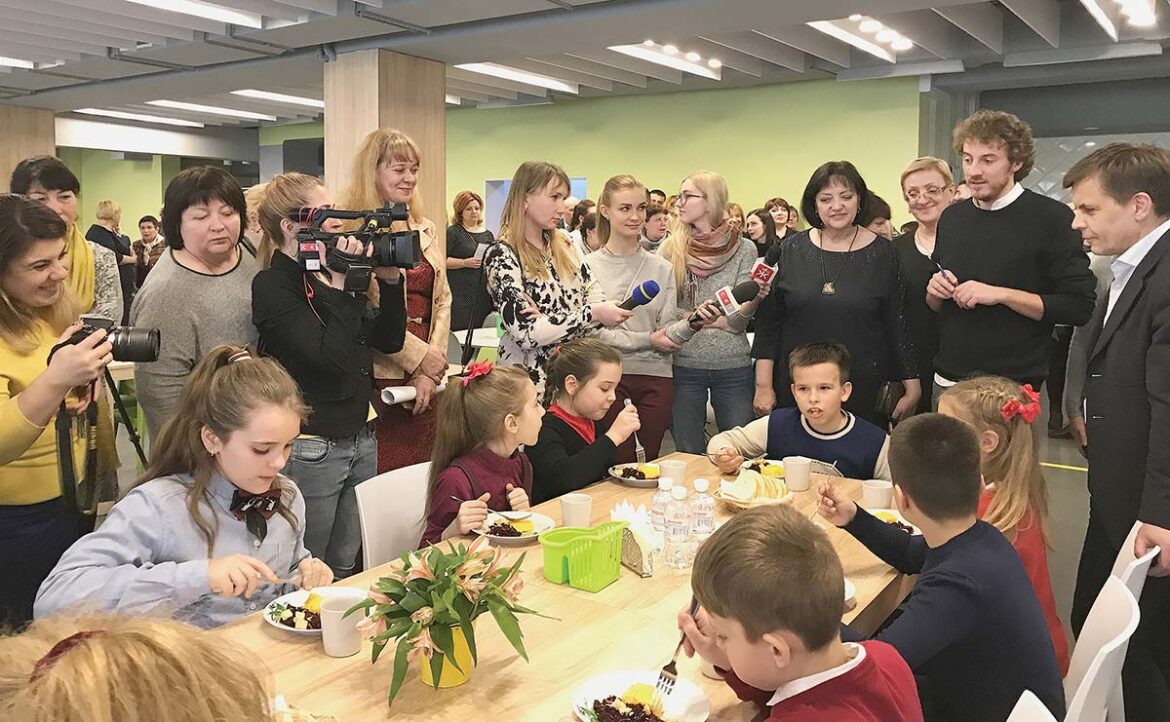 Chef Yevhen Klopotenko visits a school in Dnipro earlier this year as part of his ongoing project to upgrade and make the food served at school cafeterias tastier.

Upon returning from France, Mr. Klopotenko first started giving online cooking courses and was hired to be a brand chef for several Kyiv restaurants, whereby he would develop the menu and teach the house chefs how to make the courses.

Three years ago, he embarked on an ongoing project to make the food more appetizing at school cafeterias after observing children buying high-sodium snacks and sugary beverages at convenience stores after the final bell rang.

“The problem is, the children don’t eat at all – [much of the food served] is based on a Soviet system dating to 1975,” Mr. Klopotenko said.

He started introducing well-known Western dishes, first choosing Italian minestrone soup to replace the bland, “mushy vegetable” soup served at schools. Now more than 3,000 out of 15,000 primary schools nationwide serve the soup based on his recipe.

Over all, about 23 percent of schools have either fully or partially adapted his more than 100 “recipes popular around the world.”

According to his Culture of Food project’s Facebook page (https://www.facebook.com/nsf.cult.food/), by the end of next year, 358 schools in southern Kherson Oblast will switch to his recipes.

Plans for the future

Last year, Mr. Klopotenko joined up with the co-owner of the biggest privately owned shipping and courier company – Nova Poshta – to open a Ukrainian restaurant in Kyiv.

He said that, aside from focusing on locally sourced ingredients, he cares about presentation because “you want to eat with your eyes.” He continued: “If you put normal carrot puree on a white plate and add bits of green elements it looks like a nice painting.”

Still, he admitted there is much room to grow. Mr. Klopotenko watches videos of how other chefs make food and visits top-flight restaurants, including Gordon Ramsey’s Michelin three-star restaurant in London.

In addition to a 70-recipe book he published this year of Ukrainian dishes, he told The Ukrainian Weekly he is working on publishing another containing 500 recipes.

Mr. Klopotenko has the political will and backing of First Lady Olena Zelenskyy to continue changing the food at school cafeterias, which has included updating “norms and terms” on “how you should cook and what food should be.”

He is not gunning for a Michelin star rating. Instead, Mr. Klopotenko said his goal is to have his eatery included among The World’s 50 Best Restaurants, a yearly designation that is judged by a panel of 1,000 culinary experts and commissioned by the London-based William Reed Business Media group.

A recipe for black borshch 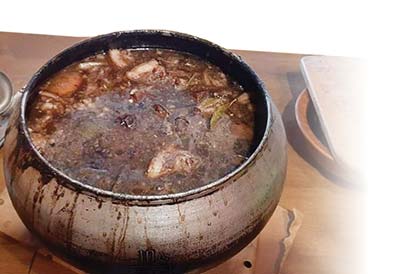 The following is a recipe for black borshch that chef Yevhen Klopotenko’s expeditionary team uncovered while conducting research in western Volyn Oblast.

In a corner of Ukraine, near the charming chain of Shatsk lakes, a certain kind of borshch has been prepared for a long time as soon as a boar is slaughtered. It is called “black” in Shatsk and nearby villages in the area. It acquires such an unusual color from the blood of the wild boar, which is the main ingredient in the dish.

To successfully execute the black borshch, a little water is poured into a cast-iron cauldron, pre-fermented red beets are added, beet kvas is also poured in, as well as finely chopped onions before placing the kettle in the oven. As the beets boil, add fresh boar parts (throat, heart, liver, kidneys and spleen [in Shatsk, the spleen is called “winter” because people believe the longer the spleen, the longer the winter will be]). Add spices: bay leaf, peppercorns, salt – whatever one has and loves to use.

Boil until it is almost done and then add the fresh boar blood, slightly diluted with cold water so that the blood does not boil into pieces. Once again put in the oven, and in 10 minutes it is ready.

There are many more tricks associated with the preparation of this unusual Volyn region dish, and there are many legends about this borshch.

The preparation of such a delicacy is quite the spectacle, so we thank the wonderful residents of the village of Kropyvnyky in Shatsk district, who gave us the opportunity to witness the making of this dish.