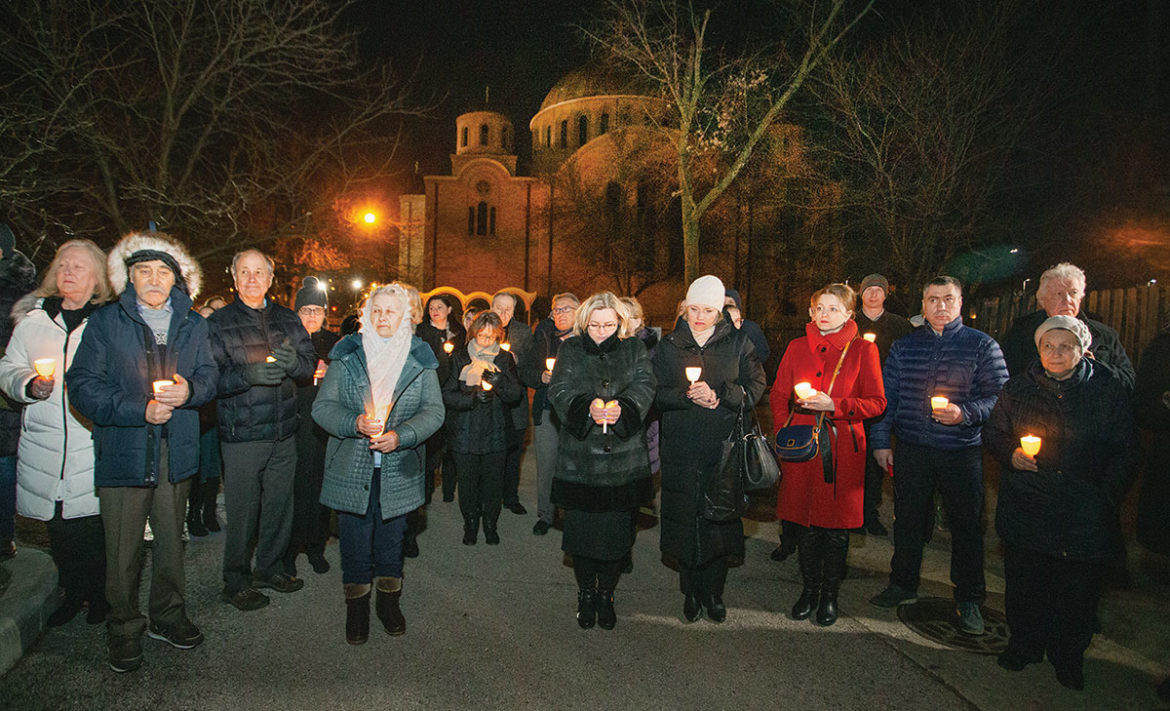 Some of the Chicago community members who participated in an outdoor vigil on February 21 in remembrance of the Heavenly Hundred.

CHICAGO – On the sixth anniversary of the bloody killings that took place on Kyiv’s Maidan between February 18 and 21, 2014, during the Revolution of Dignity, Ukrainians throughout the world remembered and honored the victims. More than 100 heroes were killed, dozens disappeared and hundreds were tortured on those fateful days.

On February 21, Chicago’s Ukrainian community commemorated the tragic events at an event hosted by the Ukrainian Congress Committee of America, Illinois Division, and the Ukrainian National Museum.

Members of the community gathered outdoors holding 100 candles symbolizing the Heavenly Hundred (Nebesna Sotnia in Ukrainian) at a memorial service led by the Rev. Serhiy Kovalchuk and the Rev. Roman Bobesyuk, both from St. Nicholas Ukrainian Catholic Cathedral, and the Rev. Ivan Lymar of St. Volodymyr Ukrainian Orthodox Cathedral.

Lida Tkachuk, president of the Ukrainian National Museum, and Ihor Diaczun, president of the UCCA-Illinois Division, opened the program with a reminder that the memory of the heroes will never die, as generations will pay homage to them through Ukraine’s history.

A concert-requiem followed at the exhibit hall of the museum. Talented young musicians who are members of the community – Yulia Perekhozhuk on violin, Myroslav Mykhailenko on piano, singers Nazarii Mykhailenko and Nazar Karabino­vych, Evangelina But on piano, Ivan Shmilo on bandura and honored actor Yosef Mykoliash – performed a program of classical compositions, songs and a recitation of poetry.

The emotional a capella performance of the mournful song “Plyve Kacha” by Messrs. Mykhailenko and Karabinovych was one of the highlights of the event. The duo created a mystical atmosphere in which everyone felt the presence of the unforgettable heroes of the Maidan.

While music and recitations were performed, scenes from the Maidan were displayed on a large screen in video or archival materials prepared by Maria Dziuma. A silent atmosphere of spiritual consciousness was established in homage to the fallen heroes.

Marta Farion is president of the Kyiv-Mohyla Foundation and vice-president, of the Ukrainian Congress Committee of America, Illinois Division.