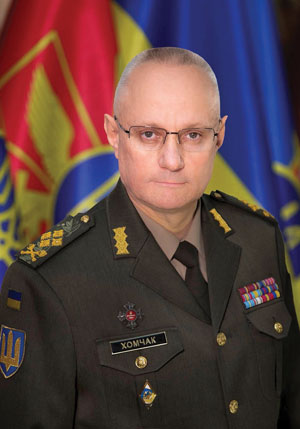 Col. Gen. Ruslan Khomchak, the outgoing commander of Ukraine’s armed forces, will now be the first deputy secretary of the country’s National Security and Defense Council.

KYIV – An overhaul of the nation’s domestic counterintelligence agency, the Security Service of Ukraine (SBU), along with changes in the military’s top brass, took place over the past week.

Col. Gen. Ruslan Khomchak was fired the following day as the commander of the armed forces, which numbers some 250,000 troops. He was subsequently appointed as the first deputy secretary of the country’s National Security and Defense Council. His dismissal was explained as an effort to mitigate infighting between the armed forces and defense ministry headed by Andriy Taran.

“Volodymyr Zelenskyy has no doubts about Ruslan Khomchak’s patriotism, loyalty to his oath and professionalism,” presidential spokesman Serhiy Nikiforov said. “But the president wants to see a synergy between the Ministry of Defense and the Armed Forces of Ukraine. Unfortunately, we do not see such synergy. We see, on the contrary, conflicts.”

In addition, the president on July 28 replaced the head of the General Staff of the Armed Forces of Ukraine, the commander of the airborne assault forces and chief of the Joint Forces. Respectively, Serhiy Korniychuk, Yevhen Moysiuk and Volodymyr Kravchenko were dismissed. Mr. Moysiuk was then appointed as deputy commander of the armed forces on July 29.

At the SBU, Ruslan Baranetskyi stepped down as a first deputy head and as the acting chief of the Anti-Terrorist Center. Vasyl Malyuk, another first deputy SBU head, was relieved from duties as chief of the Main Department for Combating Corruption and Organized Crime of the Central Department of the SBU.

Leaving his post as deputy SBU chief is Serhiy Andrushchenko, whose position was changed to first deputy chairman of the SBU and head of the Anti-Terrorist Center.
In addition, the head of the SBU’s counterintelligence department for information security, Oleksiy Korniychuk, and Vitaliy Monastyretskyi, the head of the agency’s Chernivtsi Oblast Department, were let go.

Shedding SBU’s Soviet vestiges
The SBU, a powerful and bloated spy agency, has for years made few inroads in transforming into a modern-day service. Since 2016, the International Advisory Group (IAG), which includes envoys from the European Union, NATO and the U.S., has urged the agency to reduce its staff and focus on its core competencies of counterintelligence, counter-terrorism, protection of state secrets and warding off subversion.

Currently, the agency also investigates organized and financial crimes and smuggling, areas that advisers and experts say is a source of corruption.

A bill in parliament that passed in the first of two readings in late January would transfer those functions to the recently-formed Bureau of Economic Security (BES), the National Anticorruption Bureau and the National Police.

However, the BES is not fully operational and a bureau chief is supposed to be competitively selected by September 25 and the following day the State Fiscal Service, including the tax police, would in turn cease to exist.

A second reading is expected in September but the legislative package has undergone more than 2,000 amendments thus far. Still, U.S. Secretary of State Antony Blinken in July stated that reforming the SBU is among the five steps that Ukraine needs to take before it can integrate with the EU and NATO.

In its current form, the legislation envisions reducing the SBU’s staff from about 31,000 to 17,000 people – whereas Great Britain, which has a population that exceeds Ukraine’s by 20 million, has a security staff of 4,400 employees at its MI5 security and counter-intelligence agency.

New armed forces head
Mr. Khomchak’s dismissal after two years comes amid a war with Russian armed formations in Luhansk and Donetsk that is in its eighth year that has killed 14,000 people and internally displaced 1.5 million more.

It also coincides with Kyiv’s efforts for NATO membership while it continuously reforms its armed forces to align with the defensive alliance’s standards.

“Reforms have never been painless, especially when it comes to the separation of powers and the elimination of duplication of functions between the Armed Forces and the Ministry of Defense,” the dismissed general said on Facebook. “In the conditions of counteraction to the Russian aggression, carrying out of reforms was complicated both by internal resistance and attempts of discrediting me and other commanders.”

He and Mr. Taran have in recent months publicly argued amid allegations that the civilian minister’s subordinate was not following orders. The ousted armed forces commander has said this was due to legislation that duplicated their duties.

Mr. Khomchak also was a lightning rod of criticism about what transpired at the disastrous Battle of Illovaisk in late August 2014 when regular Russian troops surrounded a combined force of Ukrainian soldiers and volunteer fighters in the Donetsk town.

As the commander of that sector of the military at the time, Mr. Khomchak has been blamed for not doing more to halt the invasion of Russian soldiers that led to the death of 366 Ukrainian soldiers, 429 wounded and close to 300 prisoners. The official data doesn’t include casualties from the numerous volunteer battalions who fought in the battle.

The general has been serving in the eastern Donbas war zone since December 2014. After being promoted to the rank of general in 2017, Mr. Zaluzhnyi has continued serving at the front lines of the war and appears to be in no hurry to assume a staff position within the military.

The separate Donbas service of Radio Free Europe/Radio Liberty (RFE/RL) reported that “during his tenure as a member of the Armed Forces, the village of Pivdenne near Horlivka, controlled by Russian hybrid forces, was liberated and advanced near Volnovakha.”

The military officers interviewed by RFE/RL called Mr. Zaluzhnyi “one of the most outspoken generals, who understands the problems of soldiers and junior officers and ‘does not think that stars on shoulder straps are a reason to be arrogant.’”