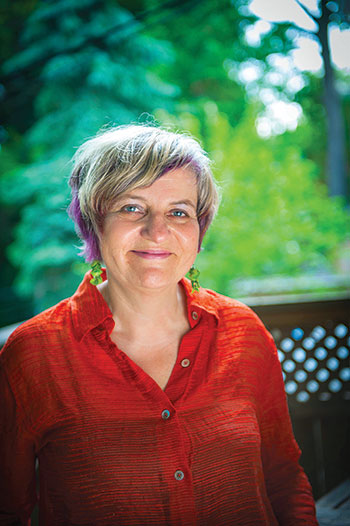 EDMONTON, Alberta – The Canadian Institute of Ukrainian Studies (CIUS) took an active part in International Week activities held January 30 to February 5 at the University of Alberta by sponsoring two documentary screenings and co-sponsoring a third. All were aimed at highlighting challenges of contemporary Ukraine that are little known to international audiences.

An annual event, International Week was organized for the 32nd time this year. It is the largest extracurricular educational event held at the university, consisting of lectures, exhibitions, workshops, film screenings and cultural performances.

The first CIUS-sponsored documentary, “This is Gay Propaganda: LGBT Rights and the War in Ukraine,” was presented by the film’s director, Marusya Bociurkiw. Dr. Bociurkiw is an author, filmmaker and professor. She has been producing films and videos in Canada for the past 15 years; they have been screened at film festivals and in cinemas on several continents. Ms. Bociurkiw is associate professor of media theory at Ryerson University, and director of the Studio for Media Activism and Critical Thought.

In her documentary she investigates the challenges and opportunities of Ukraine after the Euro-Maidan revolution and the Russian military aggression begun in 2014. In doing so, she follows the life of LGBT activists in Kyiv, Kharkiv and Odesa, as well as those who were forced to flee the Donbas region. The film highlights that while in Russia discriminatory laws and suppression of sexual minorities is an undisputed part of its state propaganda and confrontation with the West (and Ukraine), in Ukraine itself numerous internal challenges persist in this regard. Through a powerful narrative, the director shows the day-to-day battle for the protection of LGBT rights that is taking place in Ukraine.

The film screening of “This is Gay Propaganda” took place on January 30, attracting a large audience. Dr. Bociurkiw gave an introductory speech and took questions after the film ended. Several questions were dedicated to the film production and further life path of its main characters, while the majority of questions concerned the obstacles preventing protection of LGBT rights in Ukraine, support from the Canadian government for the implementation of democratic reforms in Ukraine and the role of the Ukrainian diaspora in these processes. This event presented an important aspect of the ongoing struggle for the protection of minority rights in Ukraine.

The second documentary screening that was organized by CIUS was dedicated to the Crimean Tatars. The film by Christina Paschyn, titled “A Struggle for Home: the Crimean Tatars,” was presented by Dr. Oleksandr Pankieiev on February 2. Ms. Paschyn is a multimedia journalist and award-winning documentary filmmaker who is currently assistant professor in the journalism program at Northwestern University in Qatar. While providing an overview of the history of this ethnic minority of Ukraine, her documentary focuses on the events just before and after Russia’s annexation of the Crimean peninsula in February 2014. Ms. Paschyn connects the tragic events of the total deportation of Crimean Tatars by Stalin in 1944 and their resistance to the annexation of 2014.

A good number of attendees present at the screening addressed their questions to Ms. Paschyn and the president of the Canadian Association of Crimean Tatars, Rustem Irzay, both of whom were available via Skype. A lively discussion ranged from questions on the current situation in Crimea, options available to Crimean Tatar activists in their resistance to the Russian regime, and future prospects for Crimean Tatars if the Russian occupation stopped. The session received very positive feedback from those who attended it and from International Week organizers.

In additional to these main events, CIUS co-sponsored a screening of the Oscar-nominated documentary “Winter on Fire: Ukraine’s Fight for Freedom,” which was organized by the Ukrainian Student Society of the University of Alberta. This film depicts the events of the Euro-Maidan revolution through a detailed and powerful narrative.

During International Week, CIUS provided University of Alberta staff and students, as well as the general public, with the opportunity to learn about aspects of Ukrainian society that were virtually not covered by the mainstream Western media. These film screenings allowed audiences not only to view top-quality documentaries but also to interact with the directors about their films. Moreover, the availability of Mr. Irzay gave those who attended the session an opportunity to hear first-hand information about the Crimean Tatar people and their resistance to the Russian occupation, from a member of their own community.

Over all, these events by CIUS made a valuable contribution to International Week, providing extensive in-depth information about Ukraine, with which Canada has long and extraordinarily close cultural ties.