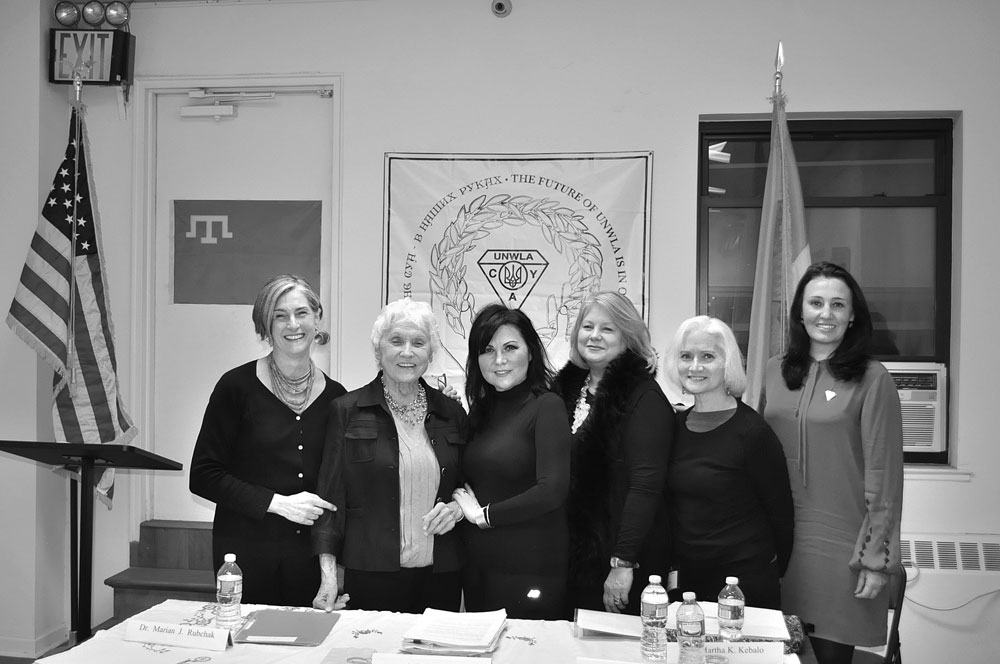 NEW YORK – The New York Regional Council of the Ukrainian National Women’s League of America hosted a conference on “The Ukraine Conflict and Wartime Gender Violence” jointly sponsored by the World Federation of Ukrainian Women’s Organizations and the UNWLA at the latter’s headquarters here on December 6.

The conference explored the multitude of ways the Ukrainian war affects women. Over 40 people attended the multi-generational event.

Program director and moderator Dr. Marta Kichorowska Kebalo, the WFUWO’s main representative to the United Nations Economic and Social Council in New York, introduced the theme of the conference. She started by giving an overview of the history and politics of the current events in Ukraine.  The war has affected women, as participants, as victims and as caretakers.

In the times of war, she said, we must resist the temptation to relegate women to secondary, support positions, but to allow them to more fully participate in the unfolding of political, military and social events. Women have already served as first responders and have  been trained to shoot and kill.

Women dominate the ranks of internally displaced refugees. Women also have to cope with being the primary providers of critical care for the wounded. All of this is in addition to the dangers of gender violence when the fabric of civil society breaks down.

Dr. Mar’iana Rubchak, professor at Valparaiso University, spoke about how the feminist voice was ignited in the Ukrainian struggle. The rebirth of Ukrainian self-determination on the Euro-Maidan also created the rebirth of the feminist spirit in its women. Refusing to be pigeon-holed in traditional nurturing and caregiving stereotypes, the feminist women of the Maidan created their own “Zhinocha Sotnia” (Women’s Brigade), she noted. Thus, they overcame the original directive of the Maidan commander barring women from the front lines of defense.

The most prominent was the 39th Self-Defense Squad, which actively trained women in fulfilling defense duties. This led to the formation of other organizations supporting the military effort. There have even been women actively fighting on the eastern front, the speaker noted, adding that much more work needs to be done for the full empowerment of Ukraine’s women.

Ayla Bakkalli, the U.S.A. representative of the Crimean Tatar Mejlis and an advisor to the Permanent Mission of Ukraine to the U.N., gave an impassioned speech about the plight of the Crimean Tatars since Russia’s military invasion and annexation of Crimea. The current situation is deteriorating on a daily basis, with violence, abductions, false arrests and confiscations of Ukrainian land.

We have yet to determine the full impact that this invasion will have on the disrupted lives of Indigenous Crimean Tatar women, Ms. Bakkalli said. The Crimean Tatars support the territorial integrity of Ukraine and have marched in solidarity with fellow Ukrainian citizens on the Maidan.

The last speaker introduced was Roksolana Misilo, UNWLA vice-president for public relations. The UNWLA, in the 90 years of its existence, has always been in the forefront of providing reliable and trustworthy humanitarian relief to Ukrainians in need.

In its Social Welfare program, the UNWLA has set up an Aid to Ukrainian War Victims Fund to cover both the immediate and long-term needs of severely wounded  warriors  and their families. Ms. Misilo gave an overview of the fund and cited specific examples of how the fund has already helped wounded soldiers and bereft families.

At the end of the conference, Dr. Kebalo’s concluding remarks re-enforced the many ideas discussed.

After a question and answer session with the audience, the conversations continued during a reception hosted by the New York Regional Council of the UNWLA. All proceeds of this event were donated to the UNWLA’s Ukrainian War Victims Fund.