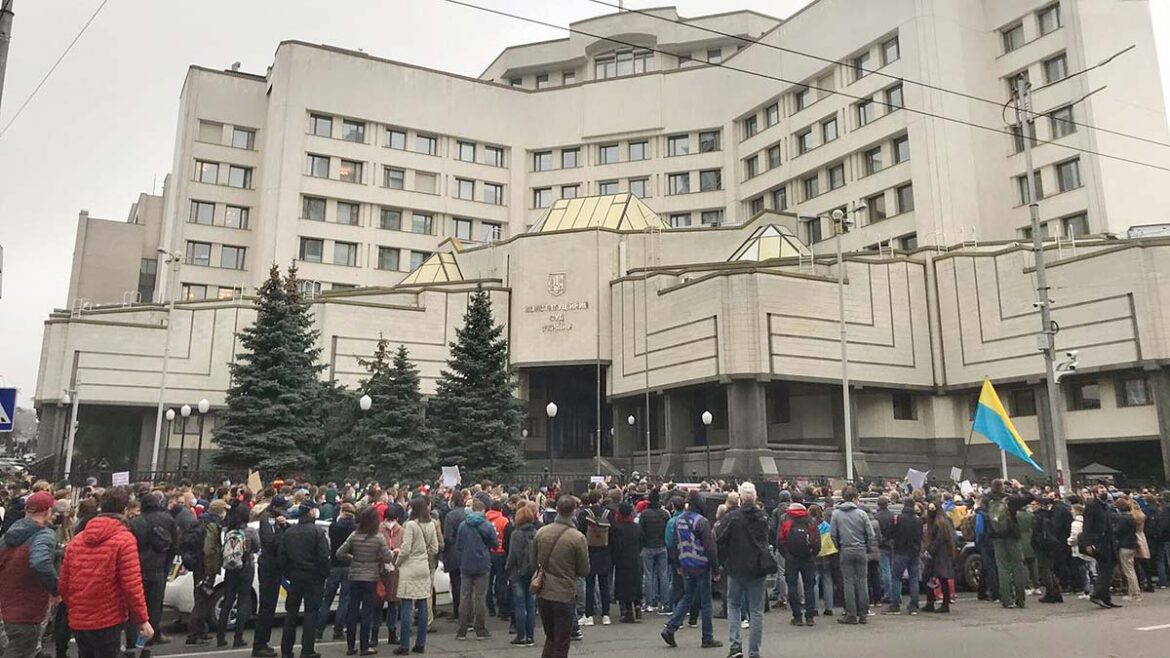 Protests near the Constitutional Court of Ukraine in Kyiv on October 30.

KYIV – The Constitutional Court of Ukraine (CCU) on October 27 declared some provisions of the country’s anti-corruption legislation unconstitutional. The CCU was ruling on the submission of 48 national deputies from two parliamentary factions, For the Future and the Opposition Platform – For Life.

What the decision means is that electronic declarations of civil servants’ income and property are abolished, the powers of the National Anti-Corruption Agency (known by its Ukrainian acronym as NAZK) to inspect civil servants are abolished, judgments of illicit enrichment are cancelled, confiscation of corrupt assets is discontinued and penalties for false declaration of assets are repealed.

On October 30, hundreds of Ukrainians protested in front of the court against its decision.

The European Union said the Constitutional Court’s decision has called into question Ukraine’s international obligations. The EU considers the anti-corruption institutions established at the Ukrainian people’s request to be the cornerstone of Ukraine’s transformation, closer political association and economic integration with Europe. Significantly, the CCU’s decision could threaten lending from the International Monetary Fund and could lead to a temporary suspension of visa-free travel to the European Union.

On October 29, President Volodymyr Zelenskyy convened an urgent closed-door meeting of the National Security and Defense Council to determine the immediate proper response to what he said are new threats to national security created by the Constitutional Court’s decision. “It is not only a matter of this decision but also, in general, of the purposeful actions of certain individuals to undermine the social contract in Ukraine and to create a threat to national security,” the president noted.

Mr. Zelenskyy said the dismantling of the National Anti-Corruption Agency’s powers and of criminal liability for deliberate violations of the law would never be accepted by Ukrainian society or Ukraine’s European partners.

“We will not have money, and we will not have support. Agreed-upon projects and the support of the World Bank will be canceled. We will have a big hole in the budget. And most importantly, we do not understand what to expect from the Constitutional Court tomorrow,” commented President Zelenskyy. “I am not sure that the judges of the Constitutional Court decided to do what they did yesterday themselves. We need to immediately register a bill in the Verkhovna Rada that provides for the restoration of the rectitude of the constitutional judiciary in Ukraine,” the president underlined.

NAZK Chairman Oleksandr Novikov commented that the CCU had destroyed Ukraine’s entire anti-corruption system, pushing it back to 1991. “Everything built during the years of Ukraine’s independence was dismantled by the CCU’s decision. It is contrary to the position of Ukrainian citizens, 91 percent of whom consider corruption a serious problem for Ukrainians,” he pointed out.

Minister of Foreign Affairs Dmytro Kuleba said the Constitutional Court’s decision poses several threats to the country’s foreign policy sphere. The fight against corruption in Ukraine has been one of the critical issues on the agenda in dialogue with the country’s reliable partners, including the European Union, the United States, Canada, Japan and South Korea.

“The G-7 Ambassadors are alarmed by efforts to undo the anti-corruption reforms that followed the Revolution of Dignity. We stand with the Ukrainian people as they continue to fight to realize their aspiration of a prosperous and democratic Ukraine. Too much progress has been made, Ukraine must not go back to the past,” the official Twitter account of Group of Seven ambassadors in Ukraine said.

The U.S. chargés d’Affaires ad interim to Ukraine, Kristina Kvien, assured that the G-7 is ready to help Ukraine move forward on the reform path.

Mr. Kuleba stated: “All of them, to one degree or another, have invested in the creation of an anti-corruption infrastructure in Ukraine – their resources, their capabilities. And that is why they also feel responsible for the continuation of its existence.” The foreign affairs minister expressed concern that, if Ukraine does not overcome the consequences of the Constitutional Court’s October 27 ruling, Ukraine’s relations with its partners will be negatively impacted.

At an urgent meeting on October 29, the Cabinet of Ministers of Ukraine adopted an order that will allow the activities of the National Anti-Corruption Agency to be unblocked. Immediately after that, the NAZK opened to the public the Unified State Register of Declarations of Persons Authorized to Perform State or Local Government Functions. It also made it possible for the NAZK to conduct the reviews required for the appointment of newly elected local leaders and deputies.

Meanwhile, President Zelenskyy proposed a bill to dissolve the Constitutional Court. The parliamentary factions of Holos, European Solidarity, Opposition Platform – For Life and For the Future oppose adoption of the president’s a bill. As a result, Mr. Zelenskyy called on the Servant of the People faction to support the early termination of powers of the Constitutional Court’s current judges.

“I assess the work of the Constitutional Court of Ukraine as a devastating hurricane,” the president said, adding that it is necessary to fight the hurricane, not its consequences. Thus, Mr. Zelenskyy called on the Constitutional Court’s judges to resign voluntarily. “I believe that this is the most liberal decision we can make today and then calmly move on to renewing the composition of the CCU,” Mr. Zelenskyy said.

“The situation in which Ukraine finds itself due to the Constitutional Court’s decision threatens not only the abolition of visa-free travel and the destruction of the anti-corruption system, but also the independence of our country as a whole,” National Deputy Yaroslav Yurchyshyn of Holos faction told The Ukrainian Weekly. “The judges have threatened the appointment of officials and the results of local elections, as it will be impossible to conduct the NAZK’s special inspection, without which the appointment of newly elected chairmen of local councils cannot take place.”

One of the options to solve the crisis is to dismiss the entire Constitutional Court, including judges who did not vote for the scandalous decision. However, this path is unconstitutional, said Mr. Yurchyshyn, the deputy chairman of the Verkhovna Rada’s Committee on Anti-Corruption Policy. “We, deputies, have to act within the limits of the law. That is why Holos will initiate amendments to the CCU law regarding the quorum of its work. We demand to create conditions in which the CCU will make decisions only by consensus, raising the quorum in the Constitutional Court from 12 to 17 people. We also insist on a fair and transparent selection of candidates for vacant vacancies on the Constitutional Court of Ukraine.”

The CCU consists of 18 judges; three positions are currently vacant. The Constitutional Court is formed by three bodies that appoint six judges each: the president, the Verkhovna Rada and the Congress of Judges of Ukraine. The current Head of the CCU is Oleksander Tupytskyy, who was appointed by the ousted President Viktor Yanukovych. In 2018, it became known that Mr. Tupytskyy had bought land in temporarily occupied Crimea and did not mention it on his official financial declaration.

Following the CCU’s decision, Mr. Yurchyshyn filed a lawsuit with the Prosecutor General’s Office, accusing the Constitutional Court’s judges of seizing power. “The result can be, at least, the removal of individual judges from office without destroying the institution of the Constitutional Court, and subsequently filling it with honest candidates through open competitions,” explained Mr. Yurchyshyn.

“While law enforcement investigates the actions of the judges, Parliament must pass a series of laws to immediately restore the full functioning of the anti-corruption system,” continued the national deputy. “In particular, to return the working system of [asset] declaration and control functions of the NAZK, strengthen administrative liability for corruption offenses and increase existing fines. These steps are a necessary minimum that must be adopted as soon as possible.”