People all over the world are forced to endure many types of hunger. Of these, two types are most prevalent – a hunger for food, and a hunger for love and affection. Very often, these two hungers are closely connected – if there were more love in the world, fewer people would suffer. Unfortunately, there are so many people starving for both food and love, that those of us who would like to alleviate their pain must decide exactly whom we can help. The Charitable Program at St. John’s Ukrainian Catholic Church in Newark, N.J., has chosen to focus its attention on the needy in Ukraine, and for the past 10 years, we have provided them with a considerable amount of aid.

Over the years, we have organized numerous fund-raisers and coordinated various collections. Last fall, we initiated a project that we called “Feed the Hungry.” Thanks to the generosity of our donors, we collected $38,850, which allowed us to purchase approximately 2,500 large bags of food. These bags were distributed to the needy throughout various regions of Ukraine by our many trusted volunteers. 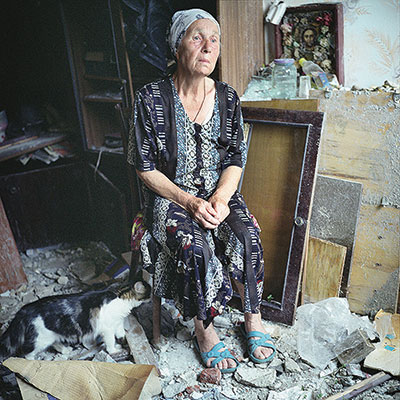 A woman in the rubble of the Donetsk bombings.

It is difficult to initially estimate how much money we should allot for each needy family. We consulted with our volunteers in Ukrainian cities, towns and villages, and discovered that $15 would pay for a large bag of non-perishable goods such as flour, sugar, oil, buckwheat and other basic food staples. Some of our volunteers promised to visit 10 homes, while others offered to bring food to over 100 people.

The longer the list of recipients, the greater the need for volunteers who would prepare the bags of food. Someone had to purchase the products. Someone had to deliver them to a place where someone would sort everything and pack it into bags, and only then was someone able to deliver this. It was both heart-warming and encouraging to see how many people volunteered their time to help.

Father Mykhaylo from the western region of Volyn assembled a group of young people and taught them about sharing one’s efforts for the benefit of the needy. A group of volunteers in the village of Kamyana near Chernivtsi reached out to the village council and was able to coordinate 10 people who helped prepare bags for 120 homes (many of which housed very sick children). Father Roman from Kyiv asked his fellow priests to help with deliveries. One of them went so far as to deliver bags of food to the people who still live in the Chornobyl area. Each village and city has its share of heartwarming stories.

In the Odesa region, Father Yuriy’s wife, Orysia, asked us to deviate from our norm and help feed hungry children whose parents are alcoholics and who hopelessly neglect their children. Orysia suggested that instead of delivering bags of food, we pay for school lunches for 12 children. We agreed to fund their lunches for the entire school year. 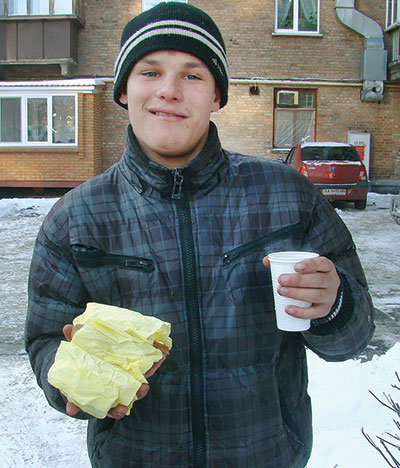 Yuriy, a boy who lives on the streets of Kyiv.

We work with many volunteers from various backgrounds in many geographic locations and are often surprised by their suggestions. Maria from Chernivtsi visits inmates in her city jail. Of the 300 inmates, 16 have absolutely no one to visit them. It does not matter how long these people have been incarcerated or what the reasons are for their imprisonment. The simple fact remains that they are human beings and they deserve compassion. Maria promised to prepare small food packets of canned fish, coffee, fresh fruit and other symbolic food items, and we paid for these packets. We later received a thank you note from the director of the jail, who told us that in all of the years that he has worked there, he has never witnessed such joy.

Our “Feed the Hungry” project was so successful, that we decided to repeat it this year. Our volunteers promise to continue to work with us, and we hope and pray that we will be able to bring a little bit of joy and comfort to even more people than before.

Please join us in this “charitable adventure.” Help us to bring a smile and a little bit of hope to as many people as possible. Let us show the needy that they are in someone’s thoughts, and that someone cares. Please make your tax-exempt checks payable to St. John’s Church (with the notation Charitable Program) and mail them to St. John’s Ukrainian Catholic Church, 719 Sanford Ave., Newark, NJ 07106. For more information, readers may call Ksenia Hapij at 201-207-4555.

Ksenia Hapij is the director of the Charitable Program at St. John’s Ukrainian Catholic Church in Newark.