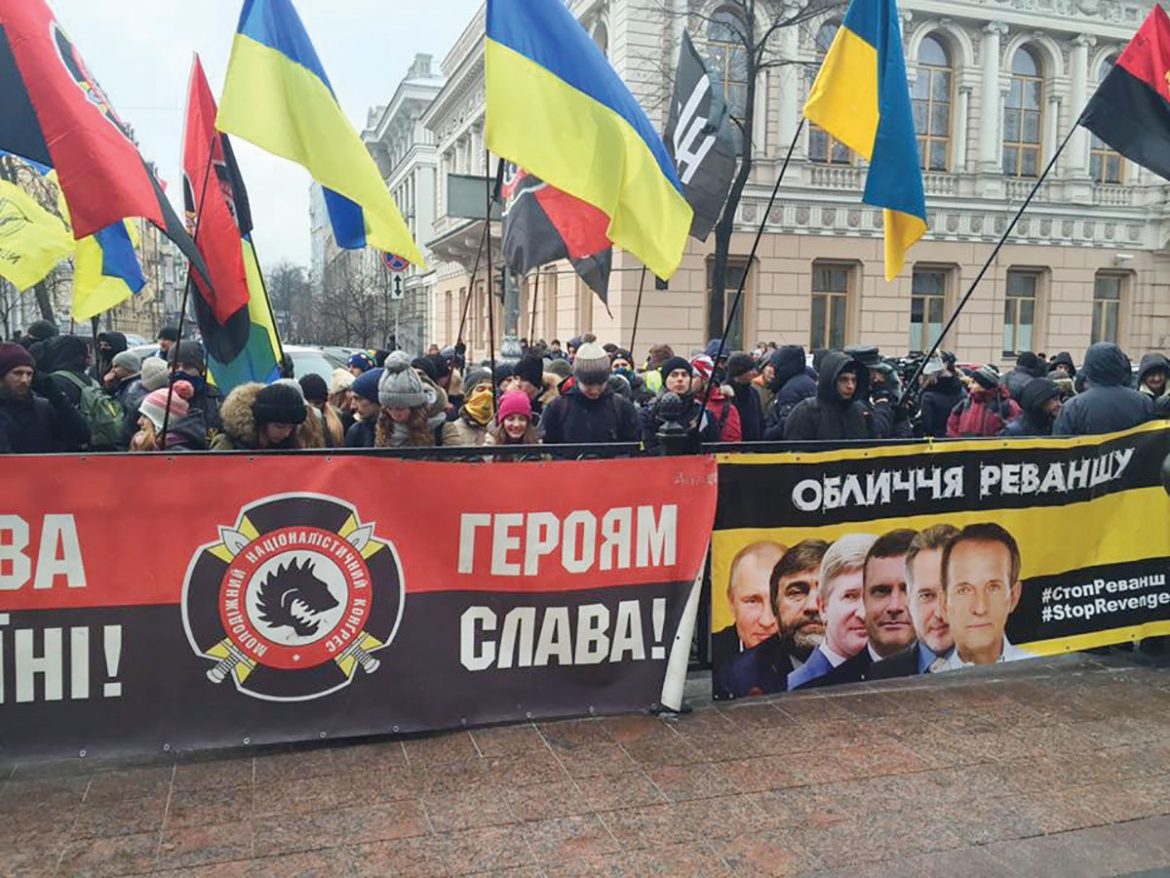 A coalition of right-wing groups rallies in front of the Verkhovna Rada on January 16 to demand that Parliament adopt a package of bills that would name Russia as an aggressor state and label lands that Kyiv doesn’t control, including Crimea, as occupied.

Exactly 280 deputies – 56 more than needed – voted on January 18 for President Petro Poroshenko’s measures to name Russia as an aggressor state and designate areas Kyiv doesn’t control as “temporarily occupied territories” in a law that could potentially limit the human rights of residents in the two easternmost oblasts of Luhansk and Donetsk.

Eastern Ukrainian land not under Ukrainian government control encompasses about 35 percent of the region’s territory, or 21,000 square kilometers.

The president’s bill doesn’t include Moscow-occupied Crimea or the truce roadmap outlined in the two failed Minsk peace agreements of September 2014 and February 2015. It also removes the term, “anti-terrorist operation (ATO)” and allows Mr. Poroshenko to deploy armed forces without declaring martial law.

Previously, the Security Service of Ukraine (SBU) was de facto in charge of military operations in the region since April 2014, when Kremlin-led forces invaded, beginning a war that has since claimed over 10,330 Ukrainian lives and displaced up to 2 million people.

The law also stipulates that Russia is responsible for most aspects of civilian lives in the occupied zone and still allows for the movement of civilians and goods through existing checkpoints along the frontline. Only birth and death certificates issued by the Russian proxy authorities will be recognized.

Significantly, the bill names February 20, 2014, as the starting point of Russia’s invasion of Ukraine that began with the occupation of Crimea, which Moscow annexed a month later. A separate United Nations resolution dating to March 2014 didn’t recognize a sham referendum that enabled the illegal annexation.

Verkhovna Rada Chairman Andriy Parubiy said that with the bill’s passing, “we demonstrate our decisiveness in combating the Russian aggressor,” according to a statement on the Parliament’s website. “The same aggressor that 100 years ago was the Russian Empire. Never do the imperial spirit and imperial intentions of Russia change to subjugate the Ukrainian state.” 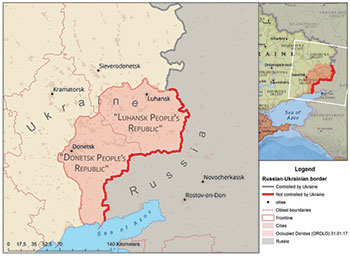 A map of the Donbas.

However, the new law doesn’t explicitly call the armed conflict in the Donbas a war against Russia. In November 2016, the International Court of Justice at The Hague called the hostilities an “international conflict” between Moscow and Kyiv starting from July 14, 2014, “at the latest,” and which separately included the occupation of Crimea.

It furthermore doesn’t mention “reintegration” or “de-occupation” as the original intention that human rights experts had envisioned when the bill was voted on in the first of two readings in October 2017.

Officially, the bill is titled “On the peculiarities of state policy that ensure the state sovereignty of Ukraine in the temporarily occupied territories of Donetsk and Luhansk oblasts.”

Yet the president emphasized that “we will keep paving the way for reintegration of the occupied Ukrainian lands by peaceful and politically diplomatic means,” when he addressed a gathering of the foreign diplomatic corps at Kyiv’s Mariyinsky Palace on January 16.

“My presidential strategy of Donbas liberation was supported. I am grateful to all the MPs for that,” Mr. Poroshenko said two days later at a joint news conference with Canadian Governor General Julie Payette in Lviv.

What concerns election watchdogs, and political and civil society experts, is that Mr. Poroshenko’s powers as president will be expanded to determine the borders of the occupied territories and define the boundaries of three “zones” near the frontline. Moreover, public oversight will be missing with the new powers the military will have in the three zones that are vaguely defined.

This, for example, “gives the armed and law enforcement forces expanded authority without the possibility of [civic] control and mechanisms therein,” said Oleksandra Dvoretska, head of Vostok-SOS, a non-profit group that helps internally displaced people and other citizens affected by the Donbas war.

At a news conference organized by the Ilko Kucheriv Democratic Initiatives Foundation on January 15, she said that, although the term “occupied territories” is more or less understood, what’s left in the grey area is the three zones designated as “districts for carrying out measures to ensure national security and defense,” where the president and armed forces will be able to enact martial law and limit the rights of transiting or local citizens.

“From the bill’s text it’s clear that also access [to these zones] for humanitarian, human rights and mass media groups will be limited,” she said.

At the same event, Donetsk native Oleksiy Matsuka, head of the Donetsk Institute of Information and chief editor of Novosti Donbassa (News of Donbas), said that, once the new law is enacted, “it’s not clear what kind of authority local governments will have to implement local policy when they will have been ‘smoothed over’ by a new military administration that won’t be beholden to any civic body or have communication with any civil society [group].”

Thus, the law could violate the Constitution of Ukraine, said Oleksandr Dmitriev, head of the Lampova Platform for Cultural Initiatives, a non-profit that engages in leadership and community development.

Without additional norms, the law will “absolutely go beyond the Constitution,” he said at the January 15 news conference. He added that all it does is leave behind the “legislative legacy of the ATO and doesn’t offer conceptual approaches and recipes for reintegrating” the region.

In turn, Democratic Initiatives research director Oleksiy Haran said that the bill doesn’t “contradict” the Minsk peace agreement, which foresees both sides pulling back heavy weapons and installing a truce, and calls for Kyiv to hold local elections once that happens, while giving special status to the region for the use of the Russian language and relations with the Kremlin.

“I emphasize again, the critical concerns that were mentioned don’t go against the main tenets of labeling Russia as an aggressor, labeling territories as temporarily occupied… But there are serious observations regarding certain constitutional provisions that concern, foremost, the rights of people…,” he said at the news conference.

Parliament Speaker Parubiy said he is certain that the president will sign the bill after the main legal department of the Verkhovna Rada looks over the final version of the bill (with the amendments that were added to the initial version), and he himself signs it. “I think that in about three days I will be able to sign it [the bill],” he said.