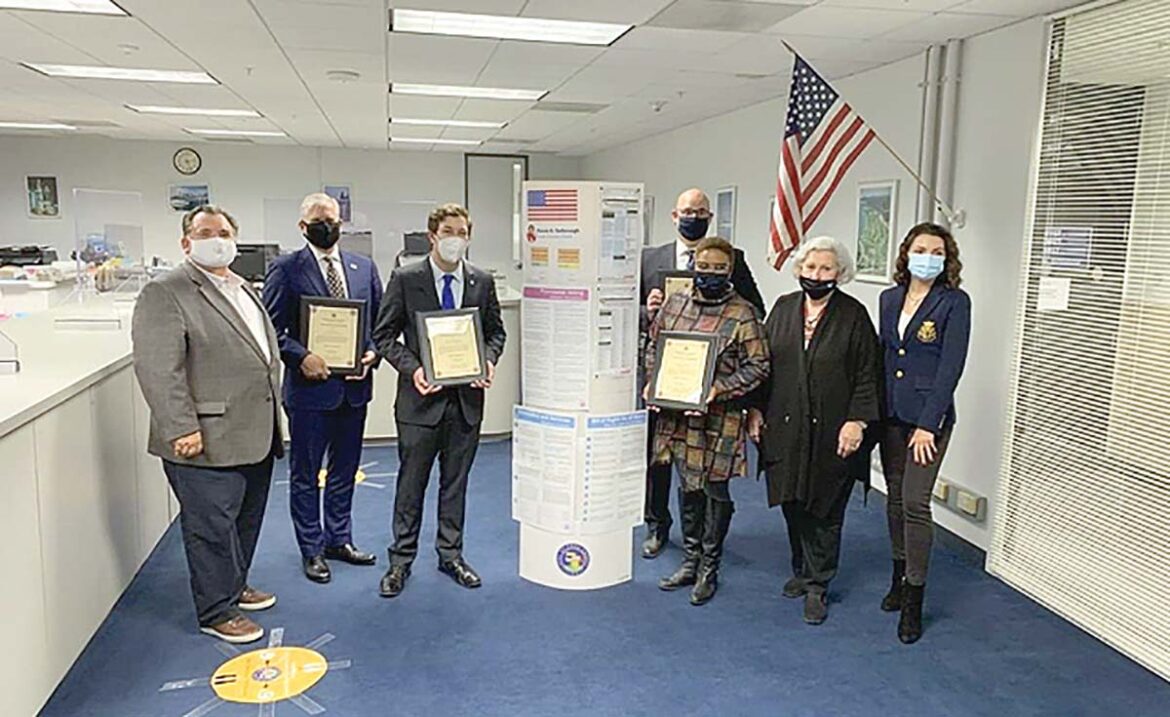 At the presentation of a certificate of appreciation at the Cook County Clerk’s Office on November 12 are (from left): UCCA-Illinois President Ihor Diaczun, Commissioners Scott Britton and Kevin B. Morrison, Deputy Clerk of Elections Edmund Michalowski, Cook County Clerk Karen A. Yarbrough, Maria Korkatsch-Groszko and Mila Luhova.

CHICAGO – Voting is a basic civic duty in a democracy. In 1975, the U.S. Congress added language-access provisions to the Voting Rights Act of 1965. Under Section 203 of that amended act, jurisdictions must provide language assistance if more than 10,000 or 5 percent of voting-age citizens belong to a single language minority group, have depressed literacy rates and do not speak English very well. The Ukrainian community of Cook County in Illinois has a population that fits this description, based on the 2010 Census.

One of the goals of the Ukrainian Congress Committee of America-Illinois Division (UCCA-Illinois) is “to coordinate and consolidate development of organized Ukrainian life in the U.S. and strive to increase the importance and role of the Ukrainian American community in the civic and cultural life of this country.” In keeping with this goal, and because voting is an important cornerstone of democracy, Ihor Diaczun, president, and Marta Farion, vice-president of the UCCA-Illinois, with the assistance of board members, had initiated a “Register, Vote, Complete Census 2020” project in the Ukrainian community to encourage Ukrainian registered voters to vote in the Chicago mayoral election in February of 2019 and to fill out the 2020 Census.

Cook County is home to 5.2 million people living in the city of Chicago and several northwestern suburbs. Thirty-five percent of Cook County residents speak a language other than English at home. Commissio­ners Scott Britton (14th District) and Kevin B. Morrison (15th District) strongly advocated and engaged in legislative initiatives to provide election ballots in native languages. In October 2019, the Cook County Board of Commissioners in Illinois went beyond the basic language requirements; they passed an ordinance to assure and provide voters with fully translated electronic, mail-in and audio assistance ballots in 12 languages for the 2020 presidential and local elections on November 3. One of these languages would be Ukrainian.

In order to comply with the Cook County Board of Commissioners’ ordinance, a professional translation firm was hired to prepare the election ballots in Ukrainian; however, it was deemed necessary to contract “native-speakers” of Ukrainian, with aptitude in media communications, to proofread the ballots. The Cook County Clerk’s Office of Illinois reached out to Ms. Farion for a recommendation. Three individuals were recommended: Mila Luhova (co-chair of the UCCA-Illinois Media Committee), Maria Klimchak (host of the “Ukrainian Wave” radio program and curator at the Ukrainian National Museum of Chicago) and Halyna Parasyuk (archivist at the Ukrainian National Museum). Ms. Luhova was the lead on the proofreading and editing of the translations. She also recorded the audio instructions in Ukrainian to be used in the electronic voting process.

The UCCA-Illinois is the most active of all the Ukrainian Congress Committee of America branches in the U.S. and has an extensive network of contacts on social, cultural and political issues. It is possible that the initiative to “Register, Vote, Complete Census 2020” served as a springboard that led to the availability of election ballots in Ukrainian. Illinois’ Cook County was the first to provide election ballots in Ukrainian in the U.S.