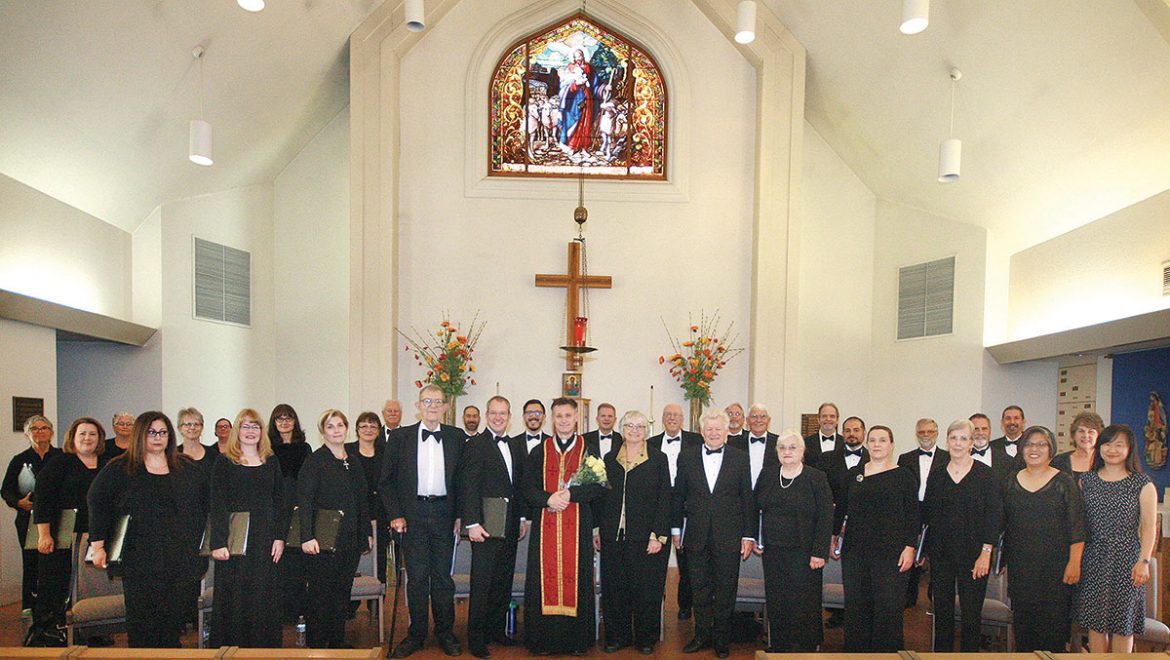 Coro Stetsenko at the Chapel of the Holy Innocents at St. James Episcopal Cathedral in Fresno, Calif., on August 26.

FRESNO, Calif. – Coro Stetsenko, an ensemble of the Fresno Community Chorus (FCC) Master Chorale, an outstanding choral group led by world class conductor Dr. Anna Hamre, premiered Kyrylo Stetsenko’s “Panakhyda,” a plaintive memorial service of the Ukrainian Orthodox Church, in the Chapel of the Holy Innocents at St. James Episcopal Cathedral in Fresno, Calif., in memory of the Holodomor of 1932-1933.

This was a centennial world premiere by the 30-member ensemble, the first non-Ukrainian a cappella group singing it in Ukrainian.

On Sunday, August 26, in the early and late afternoon, three tolls of the bell signaled the beginning of the memorial services for the millions of innocent men, women and children starved to death by the Soviet regime in the 1930s. The services also ended with the triple tolling of the bell.

“The Holodomor for Ukrainians means more than just a famine, because famines are caused by drought or blight,” said Alan Peters, president of the FCC board of directors, setting the tone in his opening remarks. “It was the man-made famine, deliberate, cruel, executed in cold blood. All grain and even seeds for the future crop were confiscated, troops were sent to seal the borders and prevent the starving from seeking provisions elsewhere. The nation’s food growers were left to starve.” They died silently, without a priest, a prayer, or a proper burial.

The “Panakhyda” was performed in memory of the holy innocents. The name of the chapel was a most fitting descriptor to remember the victims. Among these millions were thousands of Mr. Peters’ Mennonite brethren. Mennonites were mostly farmers, and they suffered from starvation no less than their Ukrainian neighbors. “The impact of singing this work in memory of the numbing reality of the Holodomor will never be forgotten by those who gave voice to this expression of both grief and hope,” said Mr. Peters. 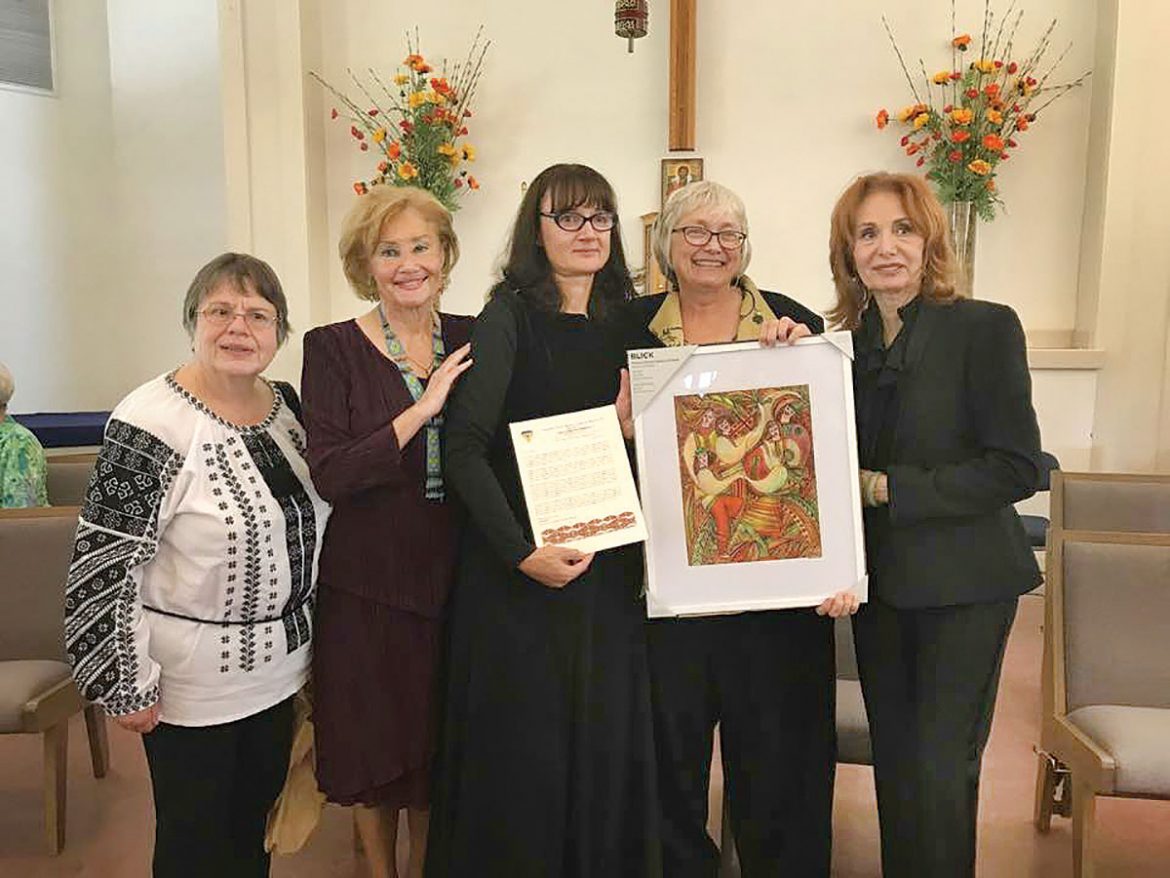 Kyrylo Stetsenko (1882-1922), a Ukrainian Orthodox priest himself, was a composer, conductor, critic, community activist and educator. He completed his “Panakhyda” in 1918 as the national requiem for the many victims of the Ukrainian war of independence (1917-1921) and dedicated it to his beloved teacher and friend, the composer Mykola Lysenko. During the country’s brief independence, Stetsenko also became the head of the Music Section in the Ministry of Education of the Ukrainian National Republic.

After the composer’s death, the work vanished from cultural horizons for 70 years, in spite of its artistic excellence and its pivotal role in establishing Ukrainian sacred music. In 21st century Ukraine, his requiem has been resurrected and performed during private and public memorial services; it is a fitting service for the victims of the Holodomor.

A local historian and art enthusiast, Dr. Victoria A. Malko of the Department of History at California State University, Fresno, who is also a soprano and member of the ensemble, used Stetsenko’s original vocal score to create a prosodic underlay with the International Phonetic Alphabet symbols to help American singers pronounce words in Ukrainian and understand their meaning via the English translation. The new edition for all voice parts took several months and iterations to complete.

The Rev. Dr. Greg Zubacz, pastor of the St. Michael the Archangel Ukrainian Greek-Catholic Mission in Fresno, led the service in the roles of both deacon and priest. In the Great and Small Litanies for the Dead and the Trisagion Prayers, the declamatory recitations of the deacon/priest were layered on top of the choral chants in a congregational expression of grief.

In the Canon section of the memorial service, basses and tenors alternated the canticles (legendary-philosophical songs) with the choir’s exhortations of “Grant peace, Lord.” The use of only one intonation model for these songs (given the various lengths of the texts) illustrated the composer’s virtuosic technique in creating forms. The last song of the Canon, “With the saints grant peace,” culminated with the chords of the powerful six-voiced forte: “… and to eternal life.” Sopranos soared in a forceful stylistic amplitude.

In a dramatic contrast, a velvety alto solo, Glady Ruiz, on pedals of choral sonority, quietly sang the prayer “You alone are Immortal,” emphasizing Phrygian intonations “You are the earth…” And the choir chanted “Alleluia” with mournfully descending linear lines.

Leading soprano Datevig Yaralian recited a declamatory “Dismissal.” The “Eternal Memory” brought the service to the sorrowful conclusion. Stetsenko enriched the ritual melody of the last movement with folk embellishments and ended it on a major, rather than minor, chord.

One of the pre-eminent authorities on the subject, Oledsander Koshyts (Alexander Koshetz) considered “Panakhyda” to be one of Stetsenko’s greatest creations. In his letter to a colleague, dated December 8, 1941, he commented that one would like to sing it like a song “so much does it contain of native humanity.”

Conductor Dr. Hamre, artistic director of the FCC Master Chorale, noted that the selection of choral literature for the repertoire has been driven not only by artistic merits but also the value new music brings to the community. With an eye to its motto, “Giving Voice to the Central Valley,” the artistic director worked tirelessly with the board of directors and the local community to bring Stetsenko’s masterpiece to life.

“It was a privilege to study and learn this incredible piece, but more than that, it was a profound responsibility to offer a program to highlight this historical atrocity that will forever remain an affront to humanity,” said Dr. Hamre.

In appreciation of Dr. Hamre’s talent and on behalf of the Ukrainian National Women’s League of America, Branch 111 representatives Olga Starow and Deanna Stetzenko Boulton presented the artwork “The Ukrainian Dance” by Yuri Viktiuk as a gift. The artist is a prominent American painter of Ukrainian descent. His works are on permanent display in museums throughout Ukraine, in the Tretyakov Gallery in Russia, and in numerous private collections in Ukraine, Canada, Germany and the United States. Deanna Stetzenko, the daughter of Kyrylo Stetsenko’s cousin, Peter A. Stetzenko, brought a thank-you letter with good wishes from Ludmila Wussek, president of UNWLA Branch 111.

The event was organized as a fund-raiser for the upcoming second symposium, “Women and Holodomor-Genocide: Victims, Survivors, Perpetrators,” scheduled for October 5 and hosted by the Department of History at California State University, Fresno, under the auspices of the Holodomor Committee of California, and sponsored by the Ukrainian Genocide Famine Foundation-U.S.A., Ukrainian National Women’s League of America, Ukrainian American Coordinating Council, Ukrainian Heritage Club of Northern California, Ukrainian Cultural Center, Ukrainian Art Center and the Consulate General of Ukraine in San Francisco.

A video recording of the performance of Stetsenko’s “Panakhyda” by Joe Vigil is available by contacting the conductor, Dr. Hamre, at ahamre@csufresno.edu.