On November 25, 2018, Russian forces attacked Ukrainian Navy ships in the Kerch Strait and captured 24 crew members. The youngest among them was Andriy Eyder, 19, who was wounded in the attack. He and his fellow service members spent the next 286 days in Russian custody. On September 7, all the captured sailors returned to Ukraine in an exchange of prisoners. This writer met Mr. Eyder in his hometown of Odesa. Just two days before our conversation, he had returned from the port of Ochakiv, where he witnessed the arrival on November 21 of the three Ukrainian ships returned by Russia. 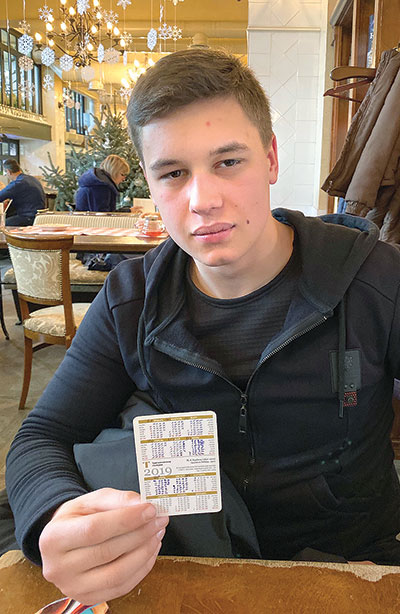 Andriy Eyder with the calendar on which he marked his days of imprisonment in Russian custody.

He was a crew member of the Ukrainian gunboat Berdyansk, which was heading from the Black Sea port of Odesa to the Azov Sea port of Mariupol, accompanied by another gunboat, Nikopol, and the tugboat Yany Kapu. When Russia blocked the entrance to the Sea of Azov, the vessels turned around for the journey back to Odesa. But they were followed and attacked in international waters.

According to news reports, the Berdyansk was hit multiple times as the ships attempted to retreat. As a result of the attack by the Russian Coast Guard, Mr. Eyder suffered shrapnel wounds to his right hand, right thigh and left knee.

His injury was complicated because of the absence of medical support while he was in custody. He related that, at one point while in prison, he was really worried about whether he would ever be able to walk normally. Fortunately for the 19-year-old crewman, it went well.

If you don’t know about his injury, you don’t notice anything unusual in Mr. Eyder’s walk. We walked a lot, as he showed me his favorite places in Odesa, while sharing his thoughts about the return of Ukraine’s ships.

“Their arrival was emotionally challenging, because we experienced too much on those boats. To be honest, my gunboat saved my life, and I am grateful for that. It withstood what it was not obliged to withstand. My emotions when I saw it cannot be explained; [words on] paper will not be able to convey those emotions, because mere words are not enough,” he said.

“The ships have been returned to us in poor condition. There are things that people from Mordor [a reference to Russia; from J.R.R. Tolkien’s fictional realm that was home to the arch-villain Sauron] have stolen. …They took personal belongings, they have stolen just about everything, even underwear,” Mr. Eyder commented.

While in Ochakiv – located between Odesa and Crimea at the mouth of the Dnipro River – he had a chance to not only inspect the gunboats from the outside but also to enter them and see how significant the damage is inside. Taking out his smartphone, Mr. Eyder showed me photos of places inside the ship where there used to be toilet bowls, sockets, dome lights, a cookstove, etc. “It doesn’t matter to them what exactly to steal. They do it for the sake of doing bad things to other people. It only causes me bad emotions, and it annoys me,” he said.

As a result of the Russia-Ukraine exchange of prisoners, which took place on September 7, Mr. Eyder returned home to Odesa. He got engaged to his girlfriend, and now they’re planning their wedding.

He sees his future in Odesa. “Right now, I continue to serve in the Navy. In the future, I will study to become an officer. I plan to fully dedicate my life to our military,” he said. He made that decision, he explained, while in prison, and he doesn’t want to consider career options not related to the military.

His opinion on the current situation is very precise and patriotic.

“I want to convey only one opinion to all Ukrainians and the whole world. I felt it myself,” Mr. Eyder said. “Russia is a real Mordor, a place where people become zombies thanks to television. Those are people who have no respect for others, people who steal everything just to steal, people who constantly lie.”

As an example, Mr. Eyder shared how he was treated in the first weeks after the attack and his imprisonment. He received first aid from his fellow crew members and then in the city of Kerch, where they were held before being transferred to Moscow. When he ended up in Lefortovo Prison in Moscow, his was still bleeding from his wounds and he needed bandaging several times a day, but no one took care of this. His prison bed was wet from the blood. When he asked to change his linens, he was told that the sheets are changed only on Thursdays. (He made the request on a Sunday.)

“They will never be different, because they have it all in their blood. It is a country without meaning, based on lies, the criminal world and the rigid control of people’s thoughts. There are exceptions, but not enough,” he continued.

Even among his friends and relatives there were a lot of people sympathetic to Russia, Mr. Eyder related. After the Kerch attack and his time in Russian custody, most of them changed their minds: those who were positive or neutral about Russia are very critical now.

Furthermore, Mr. Eyder said it’s difficult for him to understand how people still can praise the aggressor after more than 13,000 people have been killed in the Donbas.

“People need to know that any agreement with that country is not worth the piece of paper on which it is written,” and the vivid example of this is the return of the captured ships. The Russian Federation was forced to hand them back by the International Tribunal for the Law of the Sea. Yes, Russia returned the vessels, but the ships were pillaged, he underscored.

We finished our conversation near the seaport – one of Mr. Eyder’s favorite places in Odesa. After all, it’s easier to explain complicated Navy details when you can point at a real ship. Half an hour of experiencing the cold wind from the sea chilled both of us. We returned to the main road, where Mr. Eyder waited for a bus to the hospital, and from there to a meeting with his fiancée.

Before he left, he had one more message to convey: “People, if you see a Russian on your doorstep, never let him inside. Send him to hell. Because when you wake up, that house will no longer be yours.”