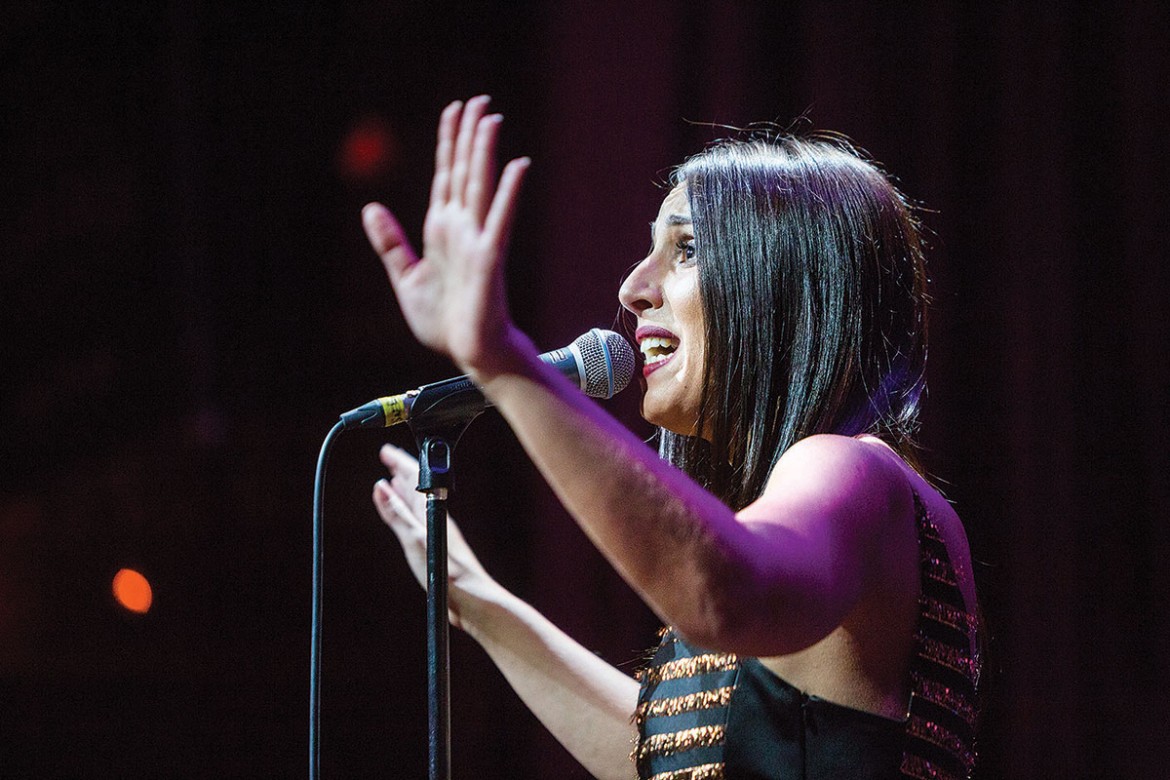 Jamala (Susana Jamaladinova) has been chosen to represent Ukraine at Eurovision 2016.

KYIV – Once again, Ukraine will make political waves at the annual Eurovision Song Contest. Yet this time around, a Crimean Tatar will represent Ukraine, as announced on February 21.

Accomplished pop singer Jamala will get a unique chance to raise Europe’s awareness to the plight of her people in performing “1944,” a song that ties the current persecution by the Russian occupation to the genocide in which Soviet dictator Joseph Stalin deported most of the Crimean Tatar population to Uzbekistan.

The Verkhovna Rada declared the 1944 forced deportation of Crimean Tatars a genocide on November 12, 2015, and designated May 18 as the Day of Remembrance of Crimean Tatar Genocide Victims. More than 180,000 Tatars, or about 84 percent of the population, was forcibly reported, according to Soviet records. The vast majority, or more than 82 percent, were resettled to Uzbekistan, while the remainder were mostly sent to Kazakhstan, Tajikistan and central Russia.

“The events in the country coincided with a certain phase of my maturation and formation,” the 32-year-old Jamala told the life.pravda.com.ua news site in an interview published on February 21.  “It was impossible not to become absorbed in what has been happening. And everyone, including myself, emerged from these events changed.”

“1944” was selected as part of a national competition that determined the winner by text-voting by the public, as well as by a jury of Ukraine’s music industry stars that consisted of 2004 Eurovision winner Ruslana, 2007 Eurovision runner up Andriy Danylko (better known as the drag queen “Verka Serduchka”) and Konstantin Meladze, the legendary pop music producer.

Despite requests by Tatar leaders, the voting couldn’t include Crimean residents for technical reasons owing to the occupation. So Crimean Tatar Mejlis Head Refat Chubarov asked the Ukrainian public to cast their votes for Jamala. Voters heeded the call and Jamala gained the most text votes – 382,500 – which translated into six points in the contest.

And although she ended up being tied with goth rockers The Hardkiss with 11 points, the tie was broken by her having more points from the public than the jury, which awarded her five points compared to six for The Hardkiss.

In “1944,” Jamala performs the soprano vocals in her trademark R&B/soul style, which proves haunting when juxtaposed against a lone club beat for most of the song before it erupts into a climatic finale with a dramatic backing keyboard track. The song also features Tatar ethnic vocals.

Jamala has been a household name on the Ukrainian pop music scene before this year’s Eurovision competition, breaking onto the scene in 2009 with her victory at the annual New Wave music competition, which was held in Latvia that year.

Born to a music director father and music teacher mother in Kyrgyzstan (where her ancestors were deported), Susana Jamaladinova, whose stage name is Jamala, grew up in Crimea where she attended the Tchaikovsky Music College in Symferopol.

During the deportations of 1944, her great-grandmother’s daughter died on a freight car and was tossed off “like garbage,” the Reuters news agency reported, citing an interview with Jamala. Now her family fears that her 87-year-old grandfather could be deported to Russia.

“My granddad’s home is there. An enormous fig garden, persimmons and pomegranates – that all can’t be left behind,” she said in the interview with life.pravda.com.ua.

She said she hasn’t been able to visit her home since the summer of 2014, especially after being branded an “American stooge” by the Russian government and mass media.

Ukraine’s political history at Eurovision dates back to 2005, when Greenjolly performed its anthem of the Orange Revolution, “Razom Nas Bahato” (“Together We Are Many”). The scenes of dancers snapping chains didn’t compensate for the song’s simple lyrics and melody as the song finished in a dismal 19th place.

In 2007, Verka Serduchka caused another political stir when performing “Dancing Lasha Tumbai,” which sparked speculation that he was really singing “Russia Good-Bye” in the song’s chorus. The absurd tribute to Soviet kitsch earned him second place overall.

Jamala’s political hymn is likely to strike a chord among the audiences of post-Soviet bloc nations such as Poland, which made “Razom Nas Bahato” its favorite song that year. Wealthier European nations have a more lighthearted approach to the contest, viewing it as a pop culture parody.

Needless to say, the Russian government isn’t pleased with Jamala drawing attention to the ongoing Russian persecution of Crimeans before a potential audience of nearly 200 million Europeans, which was the viewership last year.

Repeating the complaints of Russian Duma deputies, Sergei Aksyonov, the prime minister of the Russian occupation government of Crimea, said Jamala’s participation is unacceptable because it politicizes the contest.

Indeed it’s possible that Jamala may be disqualified from the contest, which forbids distinct political messages, news reports said. A Eurovision jury will decide on March 14.

When strangers are coming,
they come to your house,
they kill you all and say,
“We’re not guilty, not guilty.”
“Where is your mind?,”
humanity cries,
but everyone dies.
Don’t swallow my soul,
our souls.