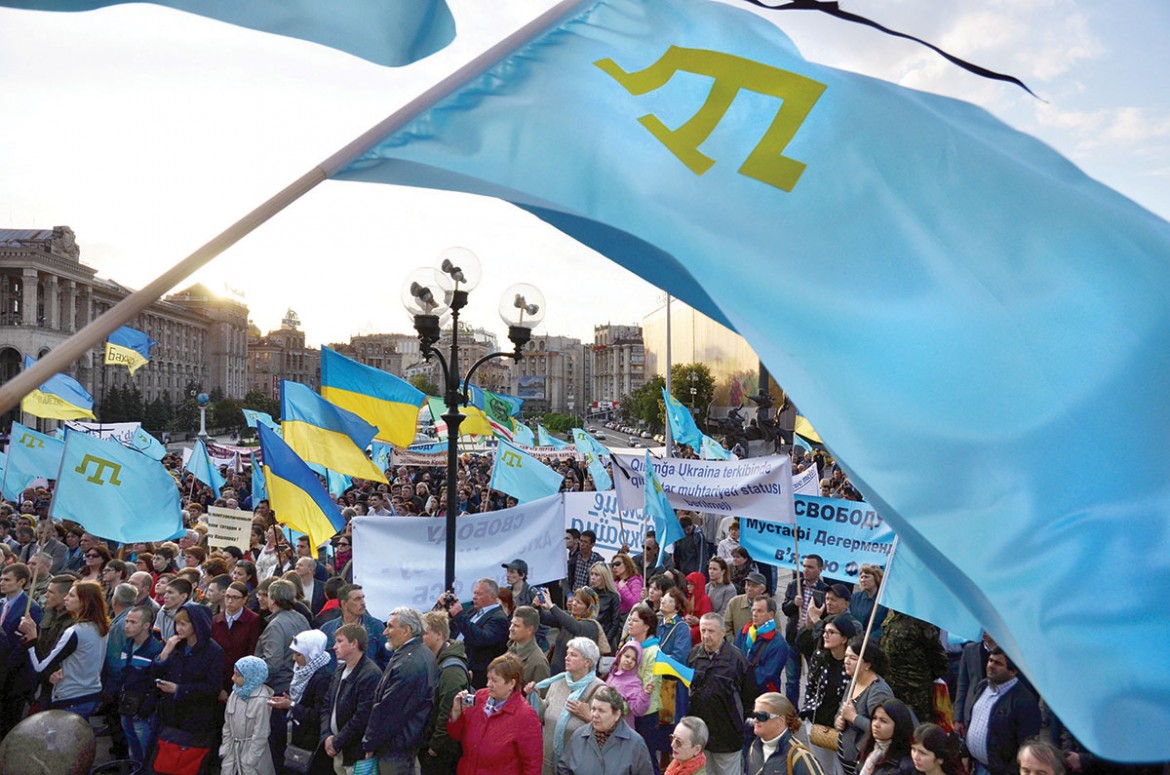 Participants at the rally of mourning held on May 18 on Kyiv’s Independence Square to mark the 71st anniversary of Stalin’s deportation of the Crimean Tatar people.

KYIV – Crimean Tatars in Ukraine marked the 71st anniversary of the mass deportation ordered by Soviet leader Joseph Stalin, which displaced around 200,000 people and cost tens of thousands of lives.

Organizers held a special event, called “I Am A Crimean Tatar,” in Holosiyivskiy Park in Kyiv on May 18 to remember the deportation victims. The commemoration was organized by Crimean Tatar activists and the Institute for Civil Society and Democracy Development.

Organizers said the gathering’s goal was twofold: to commemorate Crimean Tatars who died during the deportation to Central Asia that started on May 18, 1944, and to honor those who lost their lives during and after Crimea’s annexation by Russia in March 2014.

Several tents were set up in the park for people to gather and take part in prayers and commemorations and hear the accounts of people who survived the Stalin-era deportation and have been forced over the past year to flee Crimea for other parts of Ukraine.

Also on May 18, a special concert to mark the solemn anniversary was held in Kyiv’s National Opera House and a rally of mourning, called “Light a Flame in My Heart,” took place on Independence Square (the Maidan). In Lviv, a solemn public meeting was held in the city center. Events took place in other cities across the country, including Kherson and Kharkiv.

President Petro Poroshenko, speaking at a memorial event that evening, spoke also of the Crimean Tatars’ current struggle: “Ukraine will never agree with the occupation of Crimea and will never give one of the indigenous people of our homeland to the wolves. We will struggle for the rights, national and political freedoms of the Crimean Tatars. Crimea is not a military base, not a ‘pride of Russian sailors.’ It is an integral part of Ukraine. It is a unique region, a jewel of world civilization, a cradle of the Crimean Tatars. It is their legal and globally recognized Homeland.”

Ukraine’s Education Ministry has recommended that schools across the country devote a lesson on May 18 to the history of the deportation of Crimean Tatars and the peninsula’s other ethnic groups to Central Asia.

In May 1944, Stalin ordered the expulsion of about 180,000 Crimean Tatars, who made up around one-fifth of the Crimean population, ostensibly over alleged collaboration with Nazi occupiers. Tens of thousands of the deportees died during the journey or soon after their arrival in Central Asia.

Many deported Crimean Tatars or their children returned to Crimea in the late 1980s and the 1990s, after Ukraine re-established its independence, but rights groups say they have faced discrimination and abuses since Russia seized the peninsula from Ukraine in March 2014.

Several Crimean Tatars have turned up dead since the internationally unrecognized annexation by Russia. More Crimean Tatars activists have been arrested, while Mustafa Dzhemilev, a veteran Crimean Tatar leader and lawmaker, as well as a Ukrainian presidential envoy, and Refat Chubarov, the chairman of Crimean Tatars’ self-governing body, the Mejlis, have been barred from entering Crimea by the peninsula’s Russian-installed leaders.

To read the full text of the RFE/RL story, see http://www.rferl.org/content/ukraine-crimean-tatars-deportation-anniversary/27022541.html.