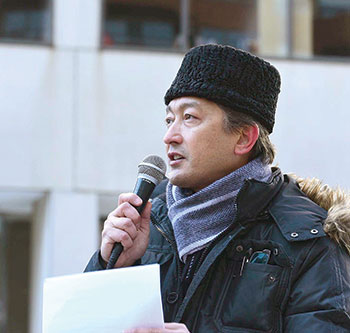 Rustem Irsay, president of the Canadian Association of Crimean Tatars.

TORONTO – The Canadian Association of Crimean Tatars, in partnership with the Toronto-based Kohorta NGO, held a rally on February 23 in front of the Consulate General of the Russian Federation in Toronto. The purpose of the event was to remind the world that Ukraine’s Crimean peninsula is still under Russian occupation.

It has been five years since Russian military without insignia seized the Crimean Parliament and installed their pro-Russian government, following an illegal referendum.

Since then, Ukrainians and Crimean Tatars residing on the peninsula have been subjected to persecutions and imprisonment based on fabricated cases, tried by Kremlin kangaroo courts.

The rally in Toronto was well-attended, as around 100 people participated, holding pictures of political prisoners and the 24 Ukrainian sailors being in Russian custody, chanting, waving flags and singing the Crimean Tatar, Ukrainian and Canadian anthems.

Rustem Irsay, president of the Canadian Association of Crimean Tatars, spoke about how the Kremlin is destroying Crimea, persecuting Crimean Tatars and sometimes killing them.

Antonina Kumka, president of Kohorta NGO, speaks at the rally.

The rally was organized as a reminder of the ongoing Russian aggression in Ukraine. Organizers noted that, as time passes, the world’s attention to Crimea and the war in Donbas fades. They underscored that we must not forget and must continue doing all in our power to ensure that Russia de-occupies the Ukrainian territories and releases all Ukrainian and Crimean Tatar political prisoners.