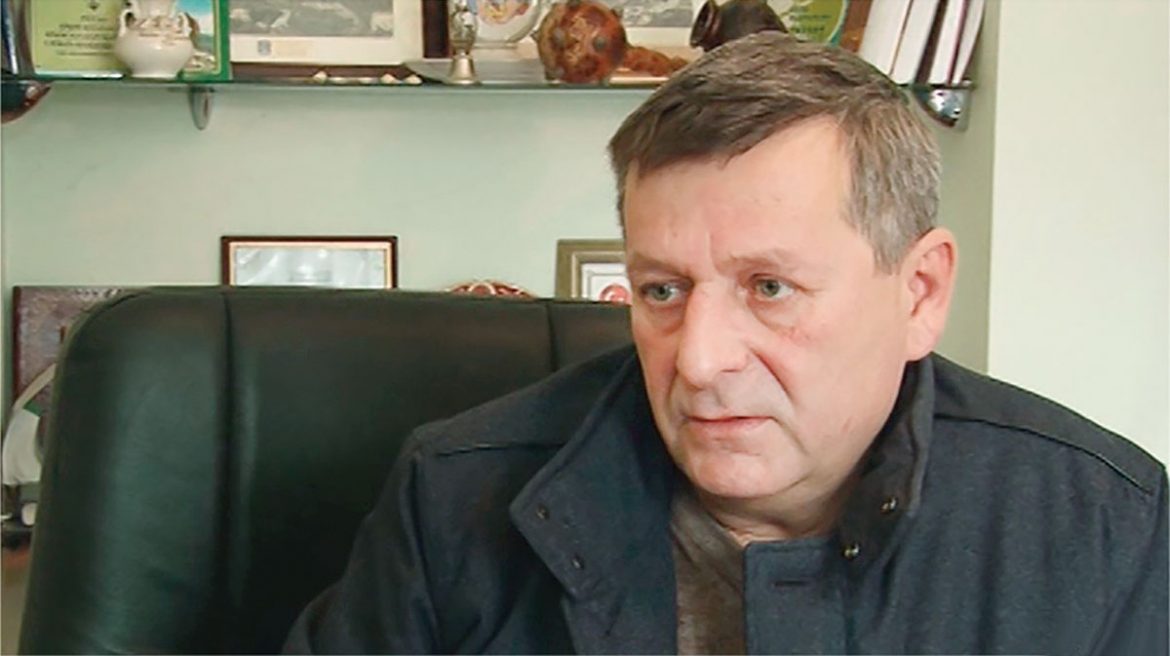 KYIV – The persecution of ethnic Ukrainians, Crimean-Tatars and Russians who take pro-Ukrainian stances by the occupying Kremlin regime in Crimea continues unabated and is reaching anomalous proportions.

“Neglect of human rights [on Ukraine’s territory of Crimea] is coming to an unprecedented scale, cynicism and absurdity,” said Crimean Tatar leader and lawmaker Mustafa Dzhemilev on August 9.

President Petro Poroshenko’s point man on Crimean Tatar affairs, Mr. Dzhemilev added, “[court] sentences, searches and detentions, including of sick and elderly people, are methods of occupation, which naively suggest that they can intimidate the Crimean Tatars.”

His latest statement was in reference to a 76-year-old lone demonstrator who was detained the previous day outside the Supreme Court of Crimea in Symferepol.

Holding a sign that partially read, “Enough accusing Crimean Tatars” of “terrorism,” Server Karametov was calling for the immediate release of Akhtem Chiygoz, a high-ranking leader of his people who has been imprisoned since January 2015 for taking part in a rally in February 2014 for Ukrainian unity before Moscow illegally annexed the peninsula a month later.

Mr. Chiygoz faces up to eight years in prison if found guilty, whereas Mr. Dzhemilev and his high-ranking colleague Refat Chubarov, remain banned from entering their historical homeland by the Kremlin occupying authorities.

Local police held the elderly protester for four hours and a court subsequently fined him the equivalent of $160 for holding an unauthorized rally and for “resisting” the three police men who had detained him.

Other cases of dissenters have made headlines in the past week.

Human rights violations by the occupying Moscow authorities have ranged across the board. Violations include freedom of press, religion, peaceful assembly, speech, as well as others, according to a monitoring report published in June by the non-profit Crimean Human Rights Group.

“We’re constantly monitoring the fluid situation,” Oleksandr Syedov, an analyst for the organization, told The Ukrainian Weekly by phone.

Forty-six-year-old farmer Volodymyr Balukh was sentenced on August 4 to serve three years and seven months in prison for taking a pro-Ukrainian stance, having hung a Ukrainian flag atop his house, he alleged.  This case was also condemned by Memorial, Russia’s oldest human rights group, the Crimean Human Rights Group and the Kharkiv Human Rights Group.

Authorities had ostensibly prosecuted him for illegally harboring munitions and explosives at his residence that Mr. Balukh said was planted there during a search of his home.

Considered a political prisoner, Mr. Balukh had also hung a street sign on his farm in northern Crimea of “The Heavenly Brigade” named after the protesters who perished from police gunfire during the Euro-Maidan Revolution of 2014 in Kyiv.

In his closing statement in court, the Ukrainian farmer voiced “love for my homeland, for everything that I am made of, my nationality, my memory of my forebears, all them whom I know.”

Explaining his actions on the farm, he said, “I don’t want…the children of all Ukraine to one day reproach me for having been cowardly, [having] shown weakness…Therefore what will happen, will happen.”

The Russian authorities are “squeezing everything Ukrainian out of Crimea, including language, culture, and identity,” said Mr. Syedov of the Crimean Human Rights Group.

Indeed, on April 19, the International Court of Justice in The Hague issued an injunction in a case that Ukraine filed against Russia, alleging that Russia was conducting a “cultural erasure” campaign on the peninsula, according to Human Rights Watch, an international civil society group based in London.

If there were an estimated 330,000 ethnic Ukrainians living on the peninsula before the land seizure, only about 350 children today take Ukrainian language lessons and only one lesson per week, the analyst said.

Officially, more than 23,000 Crimean residents left the peninsula after the annexation and registered as internally displaced people. At least twice as many had left without registering like Mr. Syedov did.

“Why should I register as a displaced person when I just moved from one Ukrainian region to another?” he asked rhetorically.

Crimean Tatars accounted for about 10 percent of the peninsula’s population numbering about 220,000, Mr. Syedov said.

In another case, Natalya Kharchenko, a member of the tight-knit Ukrainian Cultural Center in Symferopol was forced on June 20 to leave Crimea on charges of “separatism” for her pro-Ukrainian views, according to the Kharkiv Human Rights Group.

She joined her husband, Ivan Vinohradov, on that day in Kyiv; he was also a member of the group and had fled two weeks earlier.

The Kremlin occupiers were getting ready to prosecute her for making “public calls to action aimed at violating Russia’s territorial integrity,” the rights group reported. These are the same charges that another Crimean Tatar leader, Ilmi Umerov, journalist Mykola Semena and activist Suleiman Kadryov are being charged.

This article of the criminal code “came into force a few months after Russia’s invasion and annexation of Crimea and has now become one of the weapons Russia is using against Ukrainians and Russians who rightly insist that Crimea is part of Ukraine,” the group said.

In addition, there are also increasing reports that Russians are being purposefully moved to the peninsula, “a policy first applied during the Stalinist period, when Russians were brought to Crimea and often occupied the homes of Crimean Tatars and other groups forcibly deported in 1944,” the human rights group said.

Altogether, the number of human rights violations and more sinister transgressions have been documented by the Organization for Security and Cooperation in Europe, the same body that has a mandate to monitor the peace process in the Donbas war that Russia instigated.

As of late February, the OSCE said that 12 were people were killed in Crimea after they went missing or were abducted “on political grounds” since the March 2014 annexation. Seventeen people have gone missing and “39 persons were placed behind bars because of their political views.”

One of them was Oleh Sentsov, a Ukrainian filmmaker who was given a 20-year prison sentence in 2015 for ostensibly plotting a terrorist attack.

His name surfaced on August 7 when two members of the Russian punk protest band Pussy Riot hung a banner on a bridge that read “Free Sentsov” in the city of Yakutsk nearby the prison where he is incarcerated. The two activists were also detained but were later released after being suspected of staging an “unsanctioned picket.”

The European Union and the U.S. have sanctions in place against Russia for taking over Crimea. They include a virtual trade ban there as well as asset freezes and travel bans on individuals and organizations deemed responsible for taking part in the annexation.

Russia claims it officially took over the peninsula on March 18, 2014, but only a handful of nations recognize it, including North Korea. Two days later, Ukraine’s Parliament officially announced the beginning of the Crimean peninsula’s “temporary occupation” by Russia.