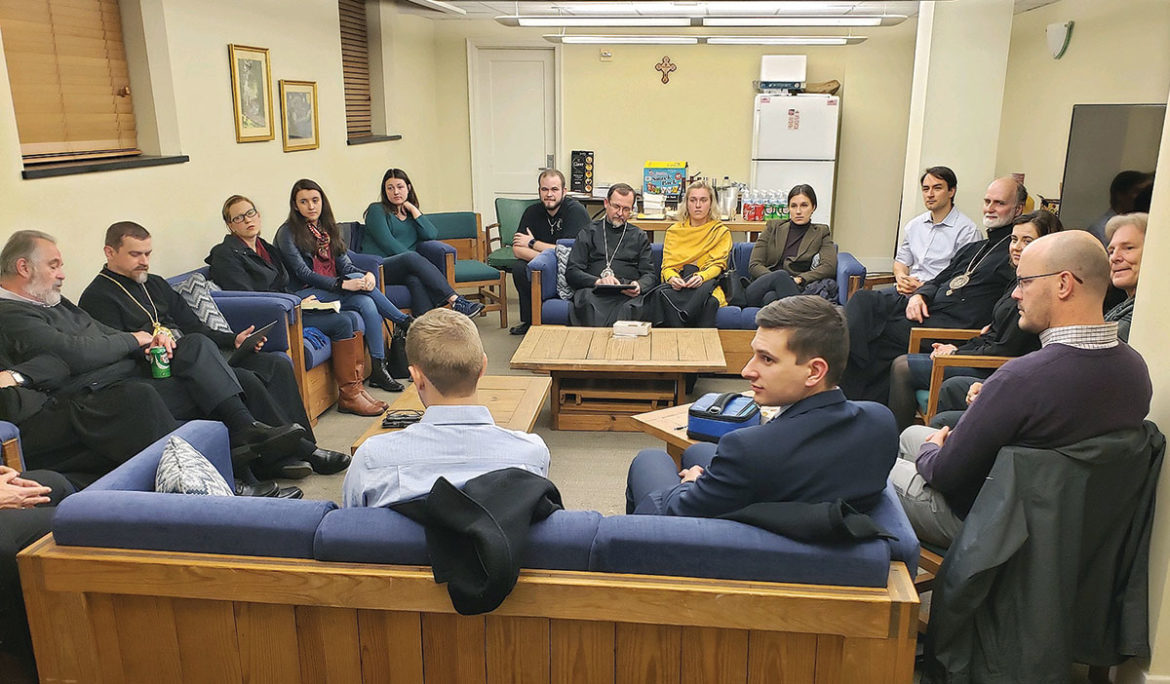 Participants of a discussion on the future of the Ukrainian Catholic Church that took place at St. Josaphat Seminary in Washington.

WASHINGTON – “As the newly elected archbishop-metropolitan of the Ukrainian Catholic Church of the U.S., what do you want to do?” This was the question posed to the newly appointed Archbishop-Metropolitan Borys Gudziak as he met with the Synod of Bishops in 2019. The group of 52 anxiously waited as the archbishop pondered this question; after a brief period of silence, he answered: “I want to listen.”

A current great challenge the Church must confront is the lack of young adults who regularly attend liturgy on Sunday. To address this point, Archbishop Borys created a working group comprising clergy and laity to discuss the state of affairs of the UGCC. In the forthcoming months, these individuals will provide a series of recommendations for this 10-year strategy.

On February 10, an informal encounter was organized at St. Josaphat Seminary in Washington, with the participation of Archbishop Borys, other hierarchs from the UGCC’s pastoral planning group, priests and seminarians along with 11 young adults from the capital region. During this gathering, members of the young adult community shared their concerns about the Church and offered suggestions on how to address these issues.

“A driving factor that prevents me from attending liturgies regularly is the delivery of the homily,” one young parishioner shared. “If the [priest or bishop] delivering the homily is unable to connect with the parishioners, if he can’t deliver his message to the people, this discourages people from attending the liturgy.”

“Technology also serves as a distraction,” commented another. “Young adults are constantly on social media, where these sites provide instant gratification. In a way, this has made their relationship with the Church a bit more selfish. Individuals no longer go to church for the sake of attending church, but because they want to get something out of it. For them, they might ask ‘by going to church, what’s in it for me?’

“They feel their time is precious. If they do not see the value in attending liturgies, a benefit from going to church, then they will not go. They rather use that time doing something else,” this participant added.

“In my opinion, the most important issue is that there is a lack of understanding when it comes to the liturgy,” a third person observed. “The purpose of attending liturgy is to establish a relationship with Jesus Christ, but many parishioners may not understand this point.”

The members of the pastoral planning group took note of the opinions shared by these young adults, and then they contributed their own concerns.

One bishop, who hailed from Argentina, shared his difficulties in upholding the traditions of the UGCC. In the United States and Canada, parishes are easily accessible due to the large pockets of diaspora Ukrainians located throughout North America. (For example, the distance between St. John the Baptist Church in Whippany, N.J., to the St. John the Baptist Church in Newark, N.J., is only 19 miles.) The parishes in Argentina, however, are scattered, and the distance between two churches may be as great as 1,000 kilometers (over 600 miles). This makes it difficult for individuals to uphold their Ukrainian Greek-Catholic traditions, especially for young adults as they move away for college and work. Moreover, unlike the United States or Canada, where there are large contingents of Ukrainians throughout the country, the Argentines do not have a means of practicing their faith when they travel outside of their community.

“We seem to be facing a new problem in the Church,” commented another bishop. “During the period of the Soviet Union, established religion was abolished. As a result, families passed on their traditions to one another, as if this was a chain. Today, it appears this chain has been broken. If one generation decides to abandon its faith, these traditions will no longer be passed on to their children and grandchildren.”

After voicing their concerns, the group proposed a few suggestions. One example was that the choirs in the various Ukrainian Greek-Catholic churches always sing the same hymns; thus, liturgies tend to be repetitive. As a way to resolve this issue, choirs can diversify their repertoire to provide a greater variety at the liturgy.

Following this discussion, Archbishop Borys thanked everyone for their time, input and involvement. While a series of recommendations was not outlined, the goal of the initial meeting was to gauge the interest and input of young adults in what will hopefully evolve into a continual relationship between these concerned young adults and the pastoral planning group of the UGCC.

Following this interaction, the dialogue among the young people, priests and seminarians continued informally over refreshments until almost 10 p.m. While the future details are yet to be announced, the group will plans to reconvene in Washington in March.