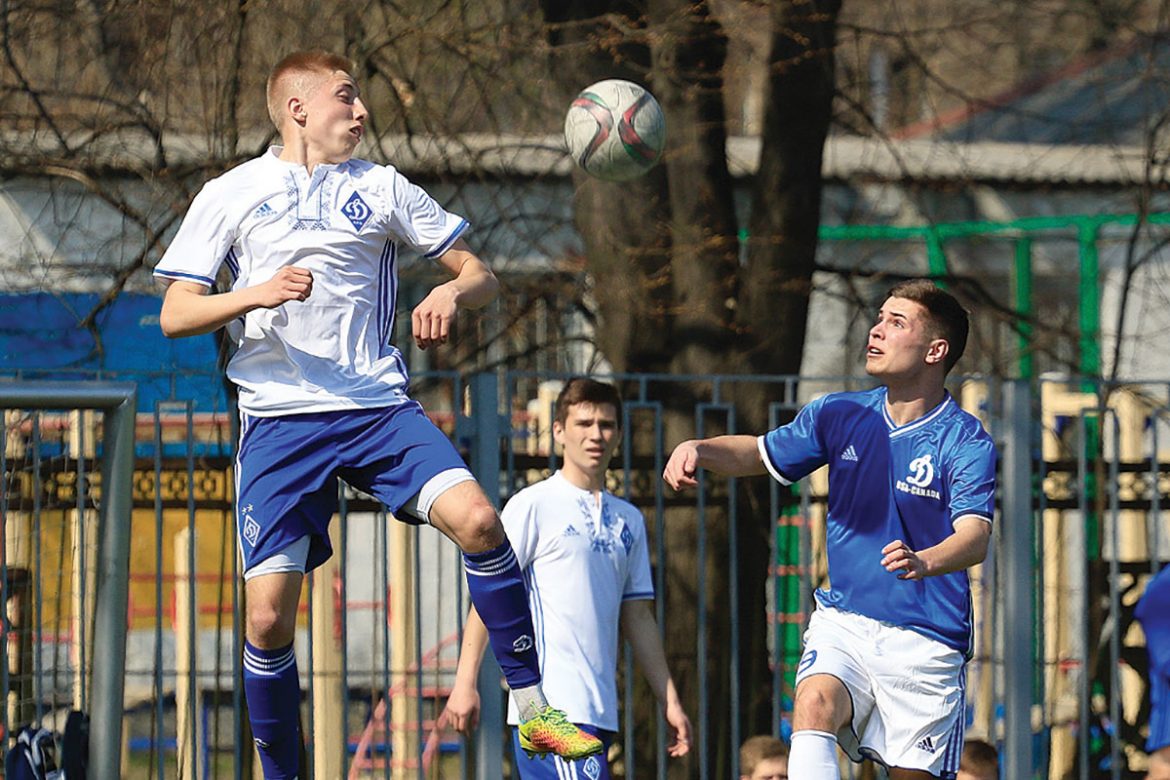 Dynamo Kyiv’s Yaroslav Nadolskyi (left) connects with the ball in midair as Torontonian Daniel Nimilovitch closes in during a friendly match on April 3 in Kyiv between Dynamo U.S.A.-Canada and the under-16 team of Dynamo Kyiv.

KYIV – To North Americans it’s “soccer,” but to the rest of the world it’s “football” – the term most commonly used to describe the globe’s premier spectator sport.

Ukraine during the week of April 3-7 saw practitioners of what Brazilian soccer legend Pele coined “the beautiful game” in a cross-Atlantic duel of three separate matches. An amalgamation of 17- and 16-year-old players of Ukrainian heritage from the U.S. and Canada formed a team to play exhibition matches with farm teams of one of Europe’s most titled soccer clubs: Dynamo Kyiv.

It was a once-in-a-lifetime opportunity for the North Americans to test their skills against players who live and breathe soccer on a daily basis at the club’s football academy where pupils live in a boarding house and practice twice a day, except on Sundays, while attending school.

“The purpose of this trip is to give the boys a little bit more experience and to show them an international level of soccer and also to show them Ukraine,” said Semen Shor, the ad hoc team’s coach who runs a soccer school in the Detroit metropolitan area together with his father, Leonid Shor, himself a graduate of Dynamo’s soccer academy. “Their parents have a background here, but they’ve never been here. So, we organized this in order to… give the boys a little taste of how it’s properly played in Europe.”

Before their arrival, the North Americans – 12 from the Toronto area, three from Chicago and one from Detroit – held only four practice sessions over two days, and then one more in-country before their first match-up versus Dynamo’s squad of players under age 16.

Expectedly, the team lost 0-10 to the technically and tactically superior Ukrainian side in a game played less than 48 hours after landing in Kyiv on April 1. Two days later, on April 5, Dynamo U.S.A.-Canada succumbed 0-3 to a younger squad under age 15.

“It’s a good exercise to play against Dynamo [Kyiv]. They’re physically and mentally ahead of us, but it’s good to see a different way of playing than what we’re used to in our country,” said 16-year-old Torontonian midfielder Gregory Chved, one of two players that Leonid Shor has identified as having professional prospects. “They play more tactically, they pass more and they’re quicker, in general.”

Visiting their ancestral homeland for the first time alleviated the pain of losing for many.

Sixteen-year-old Chicagoan Maksym Repetyuk said it was easy taking his mind off the defeats because “coming to Ukraine for the first time in my life was truly captivating.”

He continued: “I wasn’t expecting a victory at all… I’ve felt very lucky to be playing in Kyiv, knowing that it’s a once-in-a-lifetime moment which I won’t forget for any time soon. Ukraine is completely different than the U.S. with beautiful hills expanding across the coast of the Dnipro [River], and the old structures which still remain to this day.”

Although lopsided, the games still brought benefit to the Ukrainian side, according to Oleksandr Sytnyk, the coach of the under-15 squad.

“It’s obvious they came here with a desire to play… it’s evident they’re trained, they know what to do on the pitch in every phase of the game,” he said. “I only would like to see more gatherings like this. It’s always pleasing to share experience, to take a look at what other teams are doing, their style of play.”

Leonid Shor’s connection to Dynamo Kyiv’s academy made the trip possible. In January, the academy’s director, Oleksandr Ishchenko, sent an official letter to the Detroit soccer school that the Shors run inviting a group to play three friendlies in order to “strengthen business ties, friendly relations between the Ukrainian and American youth.”

In time, the Shors found interested parties in Toronto from the nearby Karpaty soccer club in Mississauga, a suburb of over 1 million people, as well as Chicago.

“Ukrainian heritage makes it a lot easier for people… to come to Ukraine rather than trying to explain to Italians why they should come to Ukraine,” explained Semen Shor.

As a world-class soccer club with 15 Ukrainian championships under its belt, Dynamo Kyiv is used to “high-level organizing because they host and visit many tournaments,” observed Semen Shor. “The boys are happy. We basically got everything for which we asked, we got training sessions, we have games, we have anthems [before games], we have everything.”

This spring’s trip came amid the growing popularity of soccer as a sport among youth in the U.S. Around 3 million kids age 5-19 years play soccer, according to U.S. Youth Soccer, a non-profit that promotes the sport. Only basketball is more popular as a spectator sport among 12- to 17-year-olds, a Huffington Post report found last year.

And Michigan, where the Shors are based, has 92,022 kids playing soccer in a state that doesn’t have an MLS team – the nation’s premier professional league is set to expand to 23 teams next year when the Los Angeles Football Club debuts.

Thus, Semen Shor hopes that “this is the first of many of our trips here… the only thing is we have to find more interest in North America to keep coming back here.”

For people like Mr. Chved of Toronto, seeing family in Ukraine is an added incentive.

“I haven’t seen them in eight years, my family lives in Ternopil, but will visit me in Kyiv while I’m here,” he said while still surveying the soccer pitch, the last player to get on the bus after the second match. 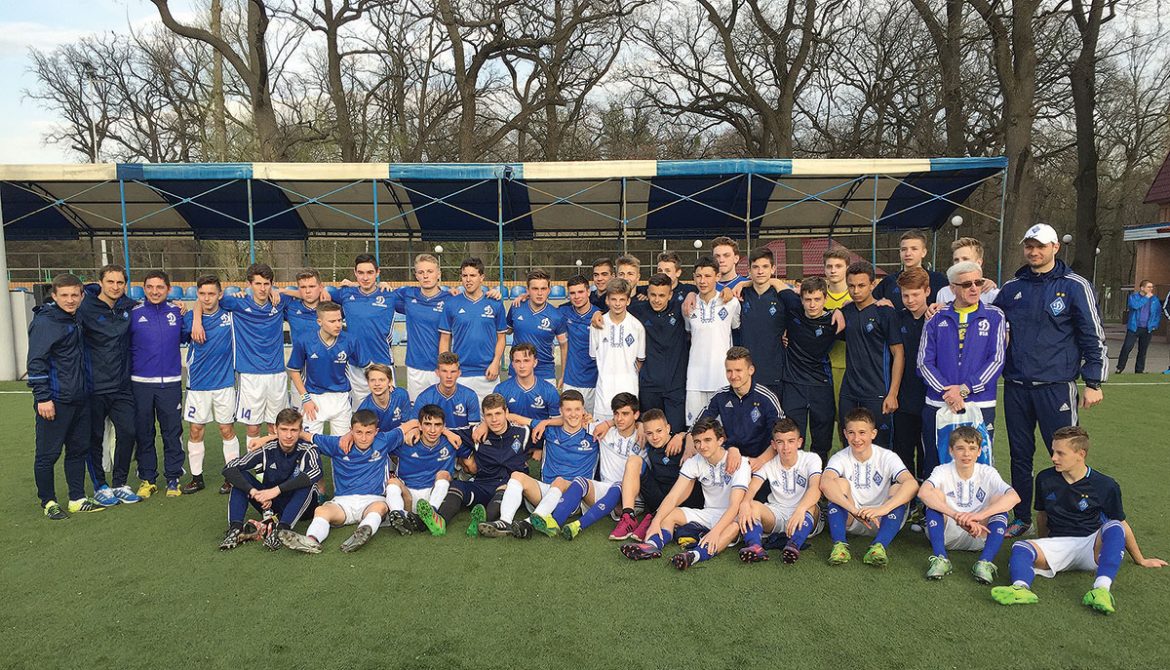 Dynamo U.S.A.-Canada together with the Dynamo Kyiv under-15 team following their friendly fixture on April 5 at the Dynamo Football Academy in Kyiv during which the Ukrainian side won 3-0.