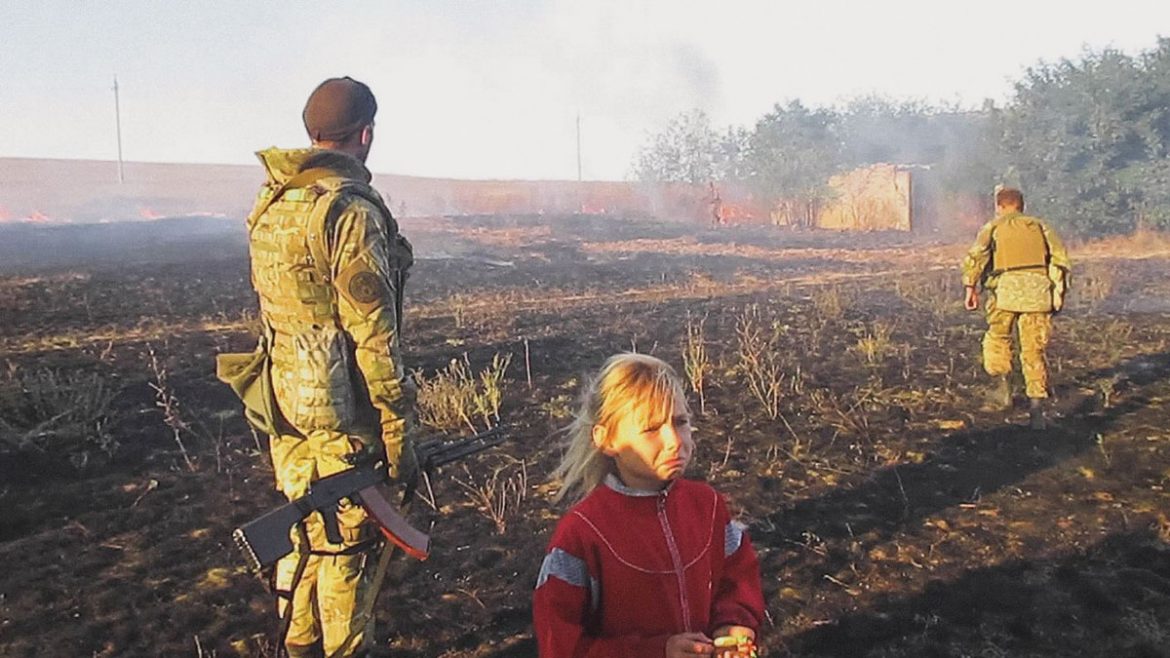 A screenshot from the documentary War Note.

KYIV – A documentary film made up of personal cell phone video captured by Ukrainian soldiers fighting in the war against Russia-backed forces will premiere in Ukraine on August 24.

The release of the film by Roman Liubyi, titled War Note, is timed to coincide with the 30th anniversary celebration of Ukraine’s renewed independence.

War Note takes the viewer on a surreal journey to the front line of the war with Russia and Russia-backed separatists. It is a place where Ukrainian law does not apply and where, as a result of living in a combat environment, the behavior, relationships and humor of the individuals involved differs dramatically from that in the rest of Ukraine.

The characters wake, fall asleep, rejoice, cry and shoot videos. Yet there is always a sense among the Ukrainian soldiers that their recording could end at any moment.

The film, directed by Roman Liubyi, is produced by Marko Suprun and supported by Babylon ‘13, an informal film association for Ukrainian documentaries that was formed during the Revolution of Dignity. The organization includes several well-known Ukrainian directors and cinematographers.

The association, of which Mr. Liubyi is a member, maintains an archive of videos. In 2014, personal videos of soldiers began to appear in the archive, many of which came from the military.

The Black Tulip organization, which evacuates dead bodies from the war zone, passed videos from the phones of dead soldiers to the archive.

But not all of the footage comes from the cell phones of dead soldiers. Some, such as Oleksiy Boldyrev and Roman Bozenko, sent footage to the archive on their own.

After the archive got their first three videos, Mr. Liubyi got the idea to combine them into a single film.

“At first, it seemed most appropriate to make a music video from these shots, but it all quickly grew into a full-length project. It became clear that we have enough material for a feature film,” Mr. Liubyi said. 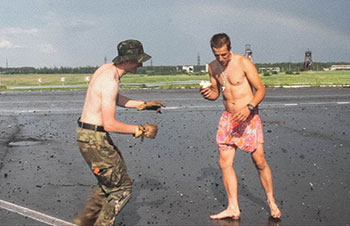 A screenshot from the documentary War Note.

The director, who is age 30, originally thought the project would take several months to complete. In the end, it took five years of sifting through and editing footage. The team worked with hundreds of hours of video from more than 50 sources. The final documentary used footage from 14 soldiers.

“I did not collect all the footage I could get. I was primarily interested in people who shot a lot, not a few videos. Many people have short shots, but it is difficult to make a story out of this material. So, we looked more for people who filmed a lot of material. And such people are noticeable; they are remembered. Some went through the war with a GoPro camera on their chests,” the director said.

Throughout the film, war is seen through the eyes of the soldiers. The experience of these 14 people seems to blend together, so that the film is perceived as the story of one soldier, even though it is the result of more than a dozen sources.

“At one point, I focused on the effect with which the viewers will leave the cinema. And we began to build the structure of the film to convey this unique experience that many military people have gained. This is the experience of death passing very close to you.

And it changes people. The closest I can compare this feeling is to a moment when you are almost hit by a car. At that point, all other things become unimportant. This is a vivid feeling that you do not confuse with anything else. So, we wanted the audience to have that experience in the film. And because of this very emotional moment, there will be an attempt to unite people with and without military experience,” Mr. Liubyi said.

The director said that the daily life of the average Ukrainian citizen is completely disconnected from what people experience at the front and in combat. Soldiers return from the war and can’t understand how people can quarrel over trivial things.

“A veteran is changing at all levels, and especially after experiencing this nearness of death. This film shortens the distance between veterans and us at least a little. The military is an important part of our society, and it is important for us to reduce this distance so that we understand each other better,” Mr. Liubyi said.

“I find it very interesting to work on the material shot on the phone. We dive in very easily because we find something emotionally common – each of us at least once shot a video on the phone. So, it is very easy to put yourself in the place of this hero,” the director said. “The material is not just what we see on the screen, but the whole story behind it.”

Valeriy Puzik, a Ukrainian artist, writer, director and veteran of the Russian-Ukrainian war who helped make the documentary, talked about his own experience filming Ukrainian soldiers at the front.

“When I got my hands on the camera, I started filming my comrades at the battalion base, and then, when we went to the front, I continued filming them there,” Mr. Puzik said. “The main motivation was to record everything. We even joked that we were making a film about ourselves.”

Mr. Puzik, whose filming of the front was not initially part of Mr. Liubyi’s project, contacted the director once he learned about the documentary.

“About a week after returning from the front, around July 2015, I learned about Roman Liubyi’s project,” Mr. Puzik said. “I immediately wrote him without hesitation. We met in Odesa at the film festival, and I transferred him a part of the footage. I had no doubts about the need to share videos because I planned to return to my unit shortly, to the front line, and who knows what could have happened there. In general, it was an inner desire to transfer the files into safe hands. … Probably to remind people about my existence,” Mr. Puzik, referring to the possibility that he might not return home from the front.
Mr. Puzik said he watched the documentary several times, adding that the experience is like “immersion in consciousness, in the weaving of dreams.” The film allowed him to look at everything from different heights, from the side, from a context different than his own.

Ten hryvnias from each ticket purchased will go to the Povernys Zhyvym Charitable Army Assistance Fund to purchase mobile surveillance systems. Povernys Zhyvym (Come Back Alive) is one of the most prominent funds in Ukraine being used to support soldiers fighting in the Donbas. It specializes primarily in night optics. In addition, the foundation is involved in educational, medical, psychological and other projects.

Mr. Liubyi said he believes the film can also be a good tool for communicating with a younger audience.

“It is dynamic, and everything is built on action. There is no scripted dialogue in the film. All of the drama is based on the actions of the soldiers,” Mr. Liubyi said.

The director said he is working on a new feature film called Iron Butterflies. Among his previous works are editing of the film “10 seconds” by Yulia Gontaruk, which won the Matrosov Prize at the 13th Docudays festival, and “Hunger for truth” by Andriy Tkach, which received a special award from the 2018 U.S.A. Film Festival in Dallas.

“I did not serve in the army or fight in the war, so I see this film as my service to Ukraine,” Mr. Liubyi said.

War Note will be screened in limited Ukrainian theaters starting on August 24. The filmmakers plan to release it at some point on a video on demand service so that it will be available to foreign audiences.