KYIV – Uke, a documentary about National Hockey League (NHL) players with Ukrainian roots, premiered on December 3 in 42 Ukrainian cities and in every region except for Russia-occupied Crimea, as well as Ternopil and Kirovohrad Oblasts. 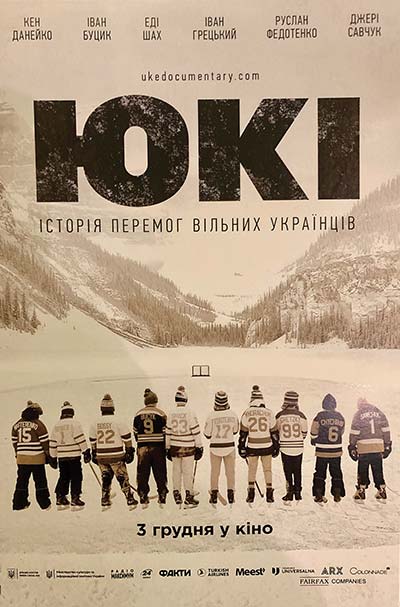 A promotional poster for the documentary “Uke,” now being screened throughout Ukraine.

Director Volodymyr Mula spent nearly three years from concept to the big screen and got Stanley Cup winners of Ukrainian heritage, including the “Great One,” Wayne Gretzky, to speak about their identity beyond rudimentary Ukrainian words and cuisine.

Previewed by The Ukrainian Weekly on December 2, Uke is a 90-minute cross-section of sports, geopolitics and identity. It’s the first documentary by a Ukrainian about NHL players of Ukrainian descent, 50 of whom have hoisted the Stanley Cup during their careers – more than any other nationality after Canada and the United States, according to the film’s research team.

The first player was Jack Leswick who won the Stanley with the Chicago Blackhawks in 1934, according to the film’s research team.

“I think a lot of people would be surprised by all the connections,” Mr. Mula, a native of Ivano-Frankivsk Oblast, said. 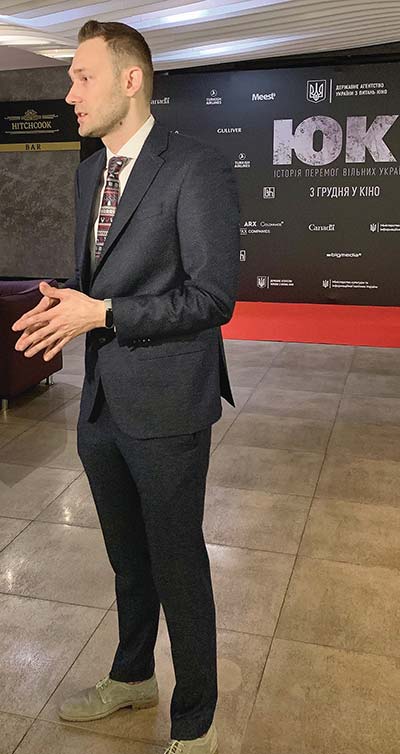 The movie starts off documenting how the relatives of the players eventually emigrated to Canada from ethnic Ukrainian lands more than 100 years ago.  Only Joe Motzko, who won the cup with the Anaheim Ducks in 2007, was born in the U.S. However, about a dozen of them moved to the U.S. after retiring from the sport.

“My goal was to show the contribution Ukrainians made to the NHL, to hockey in North America,” said Mr. Mula. “I wanted to show that their achievements and the heritage with which they identify is not forgotten here.”

For example, Mr. Gretzky recalls being told by his paternal Ukrainian grandparents to constantly chekai, or wait, and said that his dad spoke exclusively in Ukrainian after experiencing a brain aneurism until he relearned English a year after waking up from a coma.

“The most Ukrainians living outside Ukraine and Russia are in Canada,” Mr. Gretzky said in the film. According to census data from 2016, an estimated 1.35 million people of full or partial Ukrainian origin live in Canada.

Mr. Mula said Eric Nesterenko, who won the cup in 1961 with the Blackhawks, made the deepest impression on him.

The first generation Canadian has researched his family and was seen reading Anne Applebaum’s “Red Famine” book about the Stalin-engineered Holodomor of 1932-1933 that killed more than 4 million Ukrainians. His father Jacob was from the village of Rudnya in Chernihiv Oblast and fought against the Bolsheviks on the side of the Ukrainian National Republic in the early 20th century. After taking part in a failed winter military campaign, he crossed into Poland, eventually making his way to Canada.

Four-time Stanley Cup winner Mike Bossy’s grandfather also fought against the Bolsheviks as a Ukrainian Sich rifleman. Mr. Bossy first chose Montreal as his new adopted home in 1924. Mr. Bossy later had his number retired by the New York Islanders and entered the hall of fame in 1991. He holds the NHL record for the most seasons with 50-or-more goals scored, a feat he achieved nine times.

If the Detroit Red Wings had the Russian five unit of Russian hockey players in the 1990s, the Boston Bruins had the Uke line of Mr. Bucyk, Vic Stasiuk and Bronco Horvath in the late 1950s. They were the first trio in the league to each score 20 goals in the same season.

Ruslan Fedotenko of Kyiv was the first Ukrainian since the Ukrainian indepence in 1991 to win a Stanley Cup, which he did with the Pittsburgh Penguins in 2009. He won the Cup again with the Tampa Bay Lighting 2004.

“It’s the greatest feeling, raising the Cup,” Mr. Fedotenko said in the film. “It’s heavy, but your adrenaline is running high.”

He spoke of the importance of staying in shape through the gruelling season, noting how some teams “would have a stellar regular season but can’t carry that form into the playoffs” due to fatigue.

Uke was a moniker Canadians gave to Ukrainians, says Jerry Sawchuk, whose father, Terry Sawchuk, won the Stanley Cup with the Detroit Red Wings in 1952, 1954 and 1955, and in 1967 while playing for the Toronto Maple Leafs.

“They called my dad ‘Uke’ all the time. That just stuck on him and everywhere he went it was ‘Uke,’” said the elder Mr. Sawchuk, adding that hockey was a way to assimilate into Western society for many Ukrainians.

The film “Uke” was made on a budget of $225,000, three-quarters of which was provided by the Ukrainian government and $10,000 of which was donated by Ukrainian communities in North America.  The film is roughly two-and-a-half hours long and more than 40 scripts were used in its production.

Mr. Mula, 31, and his team didn’t know how much footage they would get and whether Mr. Gretzky would give them an interview, which he eventually did.  That interview lasted approximately 20 minutes.

The premiere takes place amid a coronavirus pandemic that has infected at least 772,760 Ukrainians and killed nearly 13,000 as of December 3. Theaters are allowed to operate at half capacity. Mr. Mula said the movie will screen for at least a week and maybe longer if there is enough demand.

Mr. Mula is in talks with Amazon Prime to have the film available online next year. Although an English-language version was produced, Amazon will have the final approval of subtitles in English, German and Japanese for their streaming service.

After unsuccessfully applying to six film festivals last year, including the Toronto International Film Festival, Mr. Mula is still seeking a distributor in North America. The Ukrainian Embassy in Canada has promised to assist in getting the film screened to small audiences in that country.

“I’m going to start with Canada first,” the Kyiv-based director said. “Depending on when COVID-19 goes away and what kind of restrictions are in place, I’m shooting for a Canadian premiere in fall 2021.”