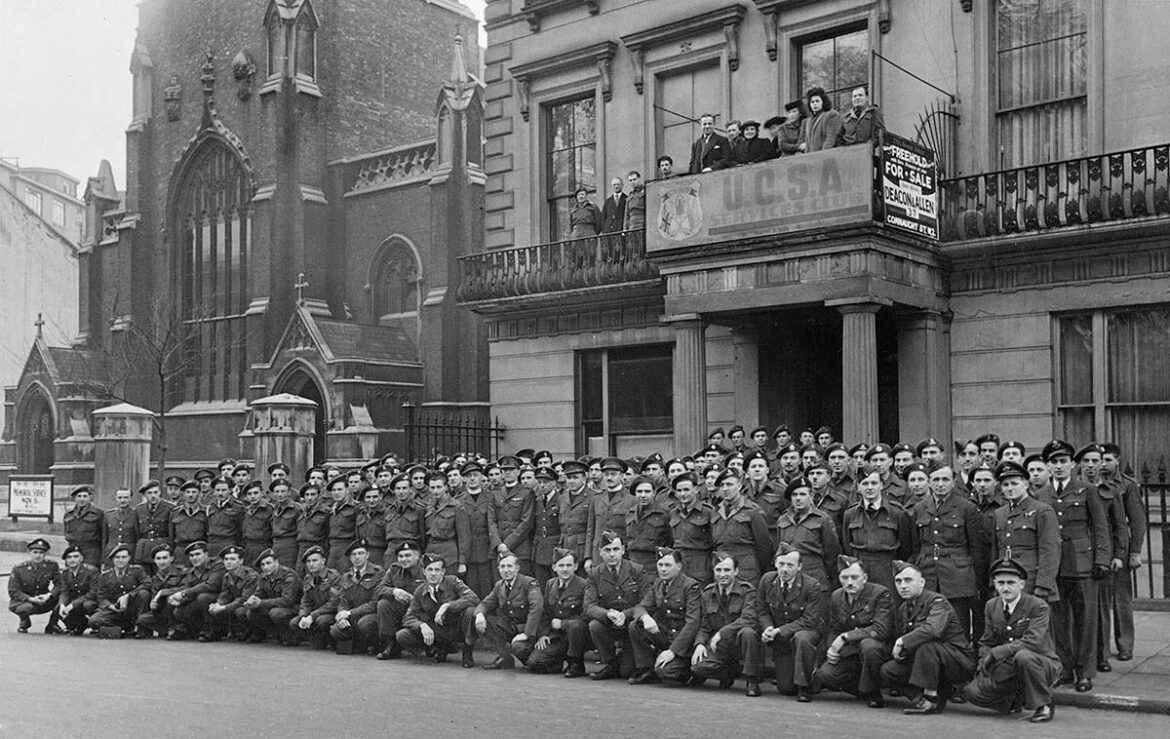 OTTAWA – On an unusually warm November 11 in Ottawa, when COVID-19 restrictions kept the usually large crowds in cooler weather away from the Remembrance Day ceremony at the National War Memorial, Ukrainian Canadian filmmaker John Paskievich reflected on the disproportionately outsized contribution members of his community made during the second world war.

“Their enlistment rate was the highest percentage of any ethnic group outside of the British in Canada,” explained Mr. Paskievich – co-director of the 1982 award-winning documentary short, “Ted Baryluk’s Grocery” – by telephone from his home in Winnipeg. He said that of the more than 1 million Canadians who served in Canada’s Armed Forces, between 35,000 and 40,000 – mainly men – were of Ukrainian origin.

The high Ukrainian Canadian wartime participation rate became a reckoning for a community whose members were branded in Canada as “enemy aliens,” many of them interned in work camps during the first world war.

“I am proud to have served in the Canadian Army,” said John Wachniak, a World War II veteran whose words are captured in Mr. Paskievich’s latest documentary, “A Canadian War Story,” produced by the Toronto-based Ukrainian Canadian Research and Documentation Center (UCRDC) with financial support from the Shevchenko Foundation’s Ukrainian Canadian Veterans Fund.

“When we Ukrainians first arrived in Canada, we were looked upon as second-class by the English and Scottish. But we proved ourselves in the war. It brought us respect,” Mr. Wachniak pointed out.

Mr. Wachniak’s memories, along with those from other Ukrainian Canadian veterans, were scoured from newspaper and UCRDC archives, Legion records and self-published books for the film project that began four years ago from an idea by retired Royal Canadian Air Force Captain Andre Sochaniwsky to highlight the community’s significant World War II contribution.

The 60-minute documentary employs voice-overs, since the veterans are either dead or were too frail for interviews.

They enlisted to serve in the war for various reasons.

“In 1942, I joined the Canadian Women’s Army Corps,” recalled Manitoban Ann Crapleve. “I was a Canadian and wanted to do my bit for the country.”

Saskatchewan resident John Yuzyk spoke of how the “economic” and “psychological” depression of the 1930s made life on the farm “rough,” prompting young men like him to sign up to serve and “get three square meals a day.”

Peter Smylski, of Dauphin, Manitoba, recognized a “crucial moment” in world history when “Europe would be rearranged and, hopefully, Ukraine would win its independence – and we wanted to be part of that.”

Mr. Paskievich, who also wrote and narrated the documentary, believes that some Ukrainian Canadians actively joined the war effort out of “a spirit of adventure because most of these young guys and women were from rural areas on the Prairies, and the Depression left life on the farm very, very hard.”

“They also wanted to show that they were as good anybody else. Almost all of them were born in Canada, so they were, in their minds, real Canadians, even though others might not have thought so,” he added.

The documentary refers to writings by Sir Mackenzie Bowell, who briefly served as Canada’s fifth prime minister between 1894 and 1896, in which he described Ukrainians who settled on the Prairies as “disgusting creatures… [that] caused many to marvel that beings bearing human form could have sunk to such a bestial level.”

One of those immigrants, poet Michael Gowda, chose service rather than rancor, and sought to organize a Ukrainian regiment in the Canadian army during World War I – a plan that was “dismissed outright” by the Canadian government, according to “A Canadian War Story.”

But rather than recruit Ukrainians, the government restricted their rights under the War Measures Act, ordering some 80,000, mainly Ukrainians, to report to the Office of the Registrar of Alien Enemies because of their citizenship in the Austro-Hungarian Empire, with which Canada was at war. Another 8,579 of these enemy aliens were sent to 24 receiving stations and internment camps from 1914 to 1920. “Those that were naturalized for less than 15 years were disenfranchised,” states the documentary.

“While Austrian Ukrainians were prevented from enlisting in the Canadian Army, Ukrainians from the Russian Empire – a British ally – were welcomed.”

From the latter group emerged Filip Konowal, a tough Canadian soldier who became the first Eastern European-born member of the British Empire to receive its highest military award, the Victoria Cross, which was presented to him in 1917 for his “conspicuous bravery and leadership” during World War I.

However, his valor didn’t push Canada toward becoming a more welcoming place for its ethnic Ukrainian citizens.

As part of the demand for agricultural and industrial workers during the 1920s, the Canadian government allowed for the arrival of about 200,000 immigrants, of whom some 65,000 were Ukrainian.

“The response to the second wave of so-called non-preferred immigration was loud and shrill,” says Mr. Paskievich’s documentary, which refers to a letter George Exton Lloyd, the Anglican bishop of Saskatchewan at the time, sent to his clergy in which he characterized Eastern Europeans as “dirty, ignorant [and] garlic-smelling.”

When the Depression struck, Ukrainian Canadians remained in the non-preferred category and were largely left with finding work as manual laborers – or if they sought to advance in any way, often changed their names to something more Anglo-sounding.

Yet the Ukrainian Canadian community rallied when Canada entered World War II in September 1939, organizing concerts to provide funds for the purchase of war bonds and encouraging enlistment.

“It was evident to everyone in Canada that Nazism was a strong and threatening dictatorship. It had to be fought,” said Joseph Romanow, a Ukrainian Canadian veteran from Saskatoon, Saskatchewan. “There was an awareness that Ukrainians must not be recognized as second-rate citizens. And one way to do that was to fight for their country.”

As with Mr. Konowal during the First World War, a Ukrainian Canadian serving in World War II was also lionized – this time by the French.

In the French town of Les Martres-de-Veyre, there is a monument, along with a street sign and square honoring an Allied airman – Sgt. Peter Dmytryk of Wynyard, Saskatchewan – fondly remembered there as “Pierre le Canadien.”

As detailed in “A Canadian War Story,” Mr. Dmytryk parachuted into rural France after his aircraft was damaged following a bombing run. He was taken in by a cell of the French Resistance known as the Maquis, which he joined and participated in sabotaging German supply depots, bridges and railway lines. Following one of those missions, he and a fellow Resistance fighter encountered a German roadblock where they met their “end in a hail of machine-gun fire” on December 9, 1943. Mr. Dmytryk was 23. The French government posthumously awarded him the Croix de Guerre, a military decoration commonly bestowed on foreign military forces allied to France.

Mr. Dmytryk was also among the tens of thousands of Ukrainian Canadians who realized Mr. Gowda’s “prophetic” sentiment – expressed a generation before, during the first world war – that “Ukrainians would ultimately need to gain full acceptance as Canadians through sacrifice on the battlefield,” according to the documentary.

“A Canadian War Story” also examines how Ukrainians, rendered stateless following World War I, had their hopes for independence dashed when the Germans occupying the Soviet Union during World War II viewed them and other Slavs as “subhumans.”

Among them were Mr. Paskievich’s late Ukrainian-born parents (his mother, Ewka, from the Lviv area; his father, Paul, from the Volyn region), who were sent to forced-labor camps in Hungary and then Austria, where they remained following the war and where Mr. Paskievich was born 72 years ago.

Some of the Ukrainian Canadians who served overseas during the war stayed behind in Europe to help Ukrainian displaced persons, such as the Paskievichs, avoid being repatriated to the Soviet Union and find a new home in Canada.

“In 1946, I returned to Europe with the [Ukrainian Canadian Congress’s] Ukrainian Canadian Relief Fund to assist the Ukrainian DPs,” remembered Ms. Crapleve in the documentary. “The early years were very hard for the DPs – very uncertain. Families would live in eight-by-eight rooms with blankets for walls.”

When the United Nations convened a meeting on displaced persons in London in February 1946, Mr. Smylski, Mr. Romanow and three other Ukrainian Canadian officers wrote a memorandum on the plight of the Ukrainian refugees who were being forcibly repatriated to the Soviet Union. They sent a copy to former First Lady Eleanor Roosevelt, the American delegate to the U.N., who urged the conference to reconsider the move to repatriation.

In June 1946, Mrs. Roosevelt, as chair of the newly formed U.N. Commission on Human Rights, oversaw the drafting of the Universal Declaration of Human Rights, which was adopted unanimously. The Soviet Union abstained over its opposition to Article 13, which provided for the right everyone has “to freedom of movement and residence,” along with the right “to leave any country, including his own, and to return to his country.”

By the early 1950s, an estimated 156,000 DPs entered Canada, of which about 40,000 were Ukrainians – a number similar to that of the Ukrainian Canadians who served in the second world war.

Mr. Paskievich, who examined the impact of exile on the children of displaced persons in his 2001 National Film Board of Canada documentary, “My Mother’s Village,” partially shot in Ukraine, told The Ukrainian Weekly that working on “A Canadian War Story” was “an absolute learning experience.”

“I certainly didn’t know about the folks whose efforts helped bring me and my parents to Canada,” he said.

“I think there should be a memorial or some kind of monument to the Ukrainian Canadian service personnel, who not only served in the war but who stayed behind and helped the DPs emigrate to Canada,” the filmmaker added.

Originally, “A Canadian War Story” was scheduled to be released for public screenings in April, but was delayed due to the coronavirus pandemic.

A national digital premiere was held on November 6 during an online event organized by the Ukrainian War Veterans Association of Canada.

Anyone interested in purchasing a DVD copy of the documentary should contact the UCRDC, which has created a website about “A Canadian War Story” at https://canadianwarstory.com.