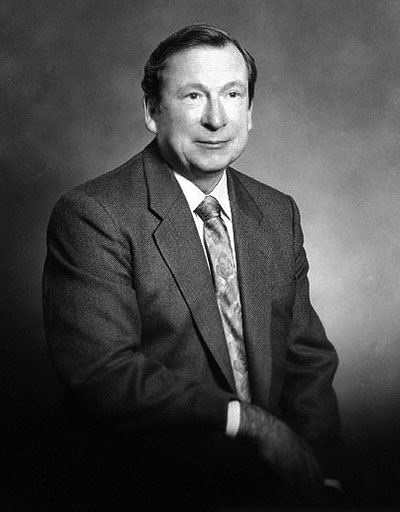 EDMONTON-TORONTO – Dr. Manoly Robert Lupul died in Calgary, Alberta, on July 24, three weeks shy of his 92nd birthday. His death was announced on August 1 by the Canadian Institute of Ukrainian Studies (CIUS), which is based in Edmonton and Toronto.

Born on August 14, 1927, in Willingdon, Alberta, he was the grandson of Ukrainian pioneers who immigrated to Canada from Bukovyna, then part of the Austro-Hungarian Empire – his father’s parents from the village of Oshykhliby in 1900, and his mother’s parents from nearby Luzhany in 1903. Both families settled a short distance from each other in the heart of the rural Ukrainian bloc settlement northeast of Edmonton, where Dr. Lupul’s parents, Vasyl and Evdokia (née Tkachuk), later met and married.

In 1944, when Manoly was 17, he moved to Edmonton with his family, which included two younger brothers, Walter and William. After graduating from Victoria High School, he studied at the University of Alberta, where he received an honors B.A. degree in history (1950) and a B.Ed. degree (1951).

Afterwards he found employment as a teacher of social studies at a junior high school for four years. During that time he was drawn to a picture in the St. John’s Ukrainian Orthodox Institute yearbook of an “attractive brunette with dark brown eyes” named Natalia Goresky, who was then teaching at an elementary school in Newbrook, Alberta. The daughter of the former Willingdon Member of the Legislative Assembly Isidore Goresky, Natalia accepted “Robert/Bob” Lupul’s proposal of marriage in October 1952, and their wedding took place the following April. Two children would be born to them: David (1956) and Elaine (1960).

Following his marriage, Mr. Lupul resumed his studies, obtaining an M.A. from the University of Minnesota in 1955, where he majored in history and the philosophy of education while doing a minor in political science. Next came a doctorate (1963) with the same specializations from Harvard University. Dr. Lupul’s groundbreaking dissertation was published by the University of Toronto Press in 1974 as the monograph “The Roman Catholic Church and the North-West School Question: A Study in Church-State Relations in Western Canada, 1885-1905.”

Dr. Lupul spent a year as a sessional lecturer at Boston University before joining the academic staff at the University of Alberta in 1958. In 1970 he was appointed a professor in the university’s Department of Educational Foundations.

In the early 1970s Dr. Lupul became actively involved in the movement in support of multiculturalism in Canada, believing strongly that there should be public funding for minority languages and cultures in Canada and that Canadians of Ukrainian descent should fully integrate into all aspects of a multicultural Canada. At this time he joined the Ukrainian Canadian Professional and Business Federation, serving for a decade on the national executive, including three years as the president (1973-1975).

He also chaired and was a vice-chair of the Canadian Consultative Council on Multiculturalism between 1973 and 1979. In this capacity, he played key roles in the establishment of the Ukrainian-English bilingual program in Alberta’s schools and in successfully lobbying the government of Alberta and the University of Alberta to support and fund the establishment of the Canadian Institute of Ukrainian Studies (CIUS). With the founding of the CIUS in 1976, he was appointed its first director, a position he held for 10 years.

Thanks to Dr. Lupul’s determination, his tireless efforts, and his visionary leadership, a strong foundation was laid for the CIUS to become the pre-eminent Canadian center of research and publishing in Ukrainian and Ukrainian-Canadian Studies and, along with the Harvard Ukrainian Research Institute, a leading center of Ukrainian studies in the Western world. He effectively mobilized Ukrainian community support for the CIUS and inspired and employed a generation of young academics to carry its work forward.

He simultaneously pursued his own academic interests, publishing numerous scholarly articles and editing five collections of articles on multiculturalism and various aspects of Ukrainian life in Canada. He was particularly passionate about the history of Ukrainians in Canada, the relationship between multiculturalism and education in Canada, and the education of minorities in Western Canada. Among his many honors, in 2003 he was appointed a member of the Order of Canada. Dr. Lupul eloquently summed up his legacy in “The Politics of Multiculturalism: A Ukrainian-Canadian Memoir,” published by CIUS Press in 2005.

A memorial service and reception in Dr. Lupul’s honor were held in Edmonton on August 8, at Park Memorial Funeral Home. The family has requested that anyone wishing to make a donation in Dr. Lupul’s memory direct it to the Prof. Manoly R. Lupul Endowment for the Advancement of Ukrainian Language Education. Cheques should be made out to “The University of Alberta – CIUS,” indicating on the memo line that the money is to go to the “Manoly Lupul Endowment Fund.” To make an online donation with a credit card, readers may go to the CIUS website at https://www.ualberta.ca/canadian-institute-of-ukrainian-studies, click on the “Make a Gift” button, then complete and submit the required information.

The Ukrainian Canadian Congress issued a statement upon learning of the scholar’s passing. The statement read, in part: “Dr. Lupul’s leadership was instrumental in establishing the Ukrainian-English bilingual program in Alberta schools. He also played an important role in promoting Canada’s multiculturalism policy as national vice-chair of the Canadian Consultative Council on Multiculturalism. In our Ukrainian Canadian community, he set new directions for development as the first chair of the Ukrainian Community Development Committee. …A teacher and mentor to hundreds of Canadians, Dr. Lupul impacted the lives of many – through his example encouraged devotion to their Ukrainian Canadian identity and involvement in our community. His example and his legacy encourage us still.”