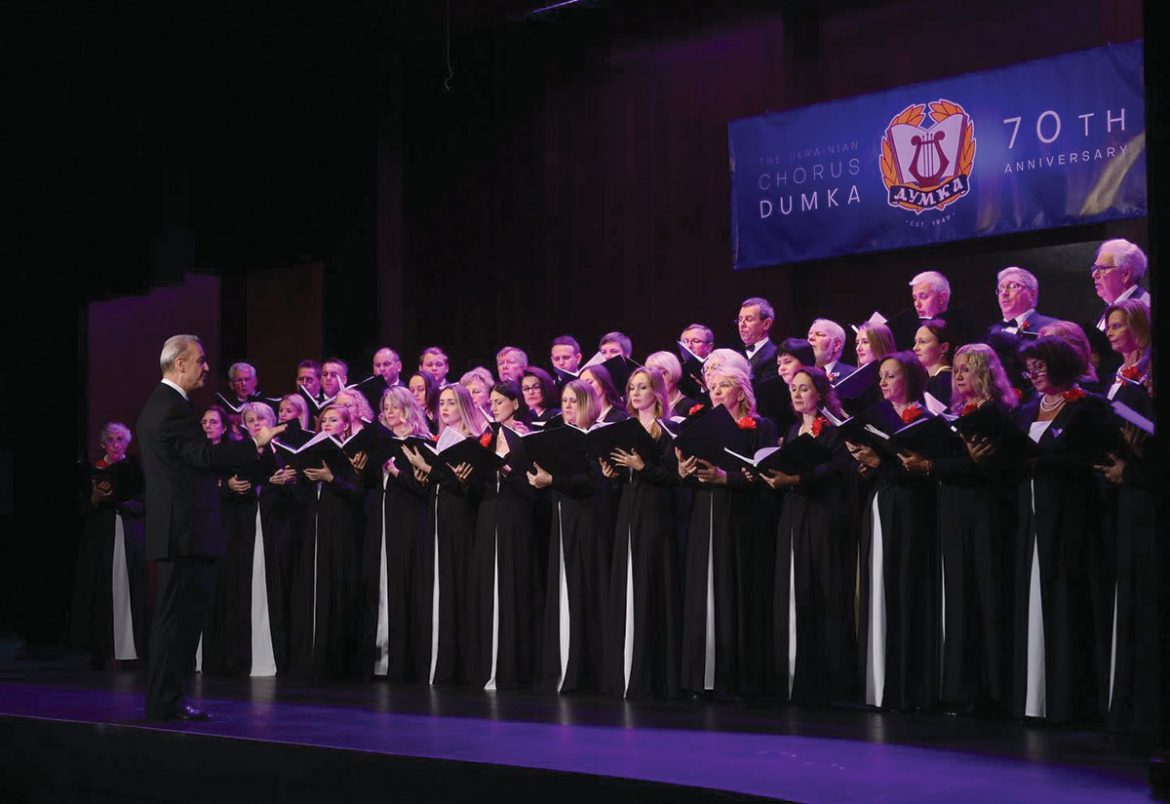 The Ukrainian Chorus Dumka of New York performs at its 70th anniversary concert.

NEW YORK – The Ukrainian Chorus Dumka of New York celebrated its 70th anniversary with a concert at Hunter College on Saturday, October 6.

The chorus’s platinum jubilee can be traced back to 1949, when Dumka was founded in New York City as a male choir. Barely four years after the end of the war, these Ukrainian immigrants, striving to support their families and still learning the new language in America, had already organized this ensemble, so they could continue singing the music they loved so well. Their stated mission was to preserve and cultivate the rich musical heritage of Ukraine.

At the anniversary concert, the adult mixed chorus led by music director and conductor Vasyl Hrechynsky presented mostly Ukrainian classic choral compositions in the first half, while the second half contrasted shorter Ukrainian melodies and folk songs, including several lighthearted and humorous works.

The concert commenced with “The Hymn of the Ukrainian Chorus Dumka,” words and music by Roman Kupchynsky. Mr. Kupchynsky was a former officer in the Ukrainian Sich Riflemen and the Ukrainian Galician Army, and a long-time contributor to the newspaper Svoboda. An admired figure in the diaspora, he composed dozens of songs including this hymn, which he dedicated to Dumka.

This was followed with two selections “Rejoice” and “Waves of Fog Roll In” by the founder of Ukrainian classical music, Mykola Lysenko. Because of the Russian imperial Ems Decree (“Ukaz”) banning the use of the Ukrainian language, the composer was forced to publish some of his works abroad. For the remainder of his life, Lysenko refused to allow any translations of his works into the Russian language. Lysenko’s beloved compositions are performed wherever there are Ukrainians.

Two other works on the first half also merit mention.

The vastly popular “Battle Hymn of the Republic” was composed by Peter Wilhousky, an American composer, choral conductor and educator of Ukrainian heritage (Petro Wilkhovskyj). We also have to thank Wilhousky for his English lyrics to Leontovych’s “Shchedryk,” which helped catapult that Ukrainian carol, known as the “Carol of the Bells,” to the attention of the whole world

Several of Verdi’s early operas also acquired political significance for Italian patriots of the mid 1850s seeking to unify their country and liberate it from foreign control. The melodic and popular chorus “Va, pensiero” (“Fly, my thoughts on wings of gold”) from the opera “Nabucco” nearly became Italy’s national anthem, and was an apt choice by Dumka, reflecting the longing of Ukrainians for their own homeland.

Following intermission, the children’s ensemble Moloda Dumka led by Tetyana Lapkovska lit up the stage. In this ensemble, children of all ages have the opportunity to learn Ukrainian folk and pop songs, and the ritual melodies for Easter and Christmas. Their energetic performances were welcomed by the public.

Next, the Malvy bandura singing duo of Ulana and Kalyna Leshchuk harmonized two selections, including Taras Petrynenko’s popular melody “Ukraino.” They were followed by the light soprano Anya Kosachevich, who sang two selections: “My Heart Burns” set to words by Lesia Ukrainka and “Should Only Roses Bloom?” composed by Lysenko.

When Dumka returned to the stage, the ladies had exchanged their black and white outfits from the first half for embroidered burgundy dresses (sponsored by Charles Podpirka). Ranging from individual folk songs to Yevhen Stankovych’s “The Feast of Kupalo” medley, the second half introduced some brio to the program. In keeping with the more intimate character of these short and peppy compositions, several were sung a capella.

Contributing to the folk atmosphere were a sopilka (shepherd’s flute) solo by Dumka member Volodymyr Zhukevych and a drymba (Jew’s harp) solo by Andriy Milavsky. The remainder were accompanied by Larisa Gutnikevich, also the pianist for the balance of the concert.

Dumka has remained steadfast to its stated mission over the years, as the chorus propagated Ukrainian melodies to audiences far and wide, lifting up its voices in Carnegie Hall, Alice Tully Hall, Avery Fisher Hall, Madison Square Garden, the Brooklyn Academy of Music, the Kennedy Center for the Performing Arts in Washington, and in concert halls of many European capitals. In 1990, the Dumka chorus conducted its first tour in Ukraine. The chorus has released numerous recordings of church and secular music.

All this could be considered commendable for professional choral groups. For an amateur community ensemble it is a major accomplishment. “Amator” means a lover (of music), but this term does not tell us how much effort is involved. The dedication and hard work to strive towards their goals has become like a parallel life of unconditional devotion for many of Dumka’s singers.

Several current members have been with Dumka for over 50 years. The Liteplo family is an inspiring example. Dr. Ronald Liteplo has been a frequent soloist and loyal member for 65 years. His brother Paul has been singing for 58. And their third brother Merrill was a member dating back to the original Children’s Chorus. According to Dr. Liteplo, the central reason for their commitment is “the mission to spread Ukrainian song.”

Various other singers confided to The Ukrainian Weekly what keeps drawing them to Dumka. A member for 48 years, Marusia Darmohraj-Mulyk said she “loves to immerse herself in the lyrical Ukrainian traditional classics.” Pavlina Pobihushka , who’s been a member for 20 years, affirmed that “music and singing are best for the soul.”

Two members of Moloda Dumka chimed in with vivid opinions. Danylo Shpyrko shared: “Dumka is the glow of my Saturday”; while Svitozar Mokrytskyy openly confessed: “Dumka is the place where I can sing my heart out.”

At the conclusion of the concert, Mr. Hrechynsky expressed appreciation for the support Dumka receives from Self-Reliance New York Federal Credit Union and invited all former Dumka members to join the performers on stage for group photos.