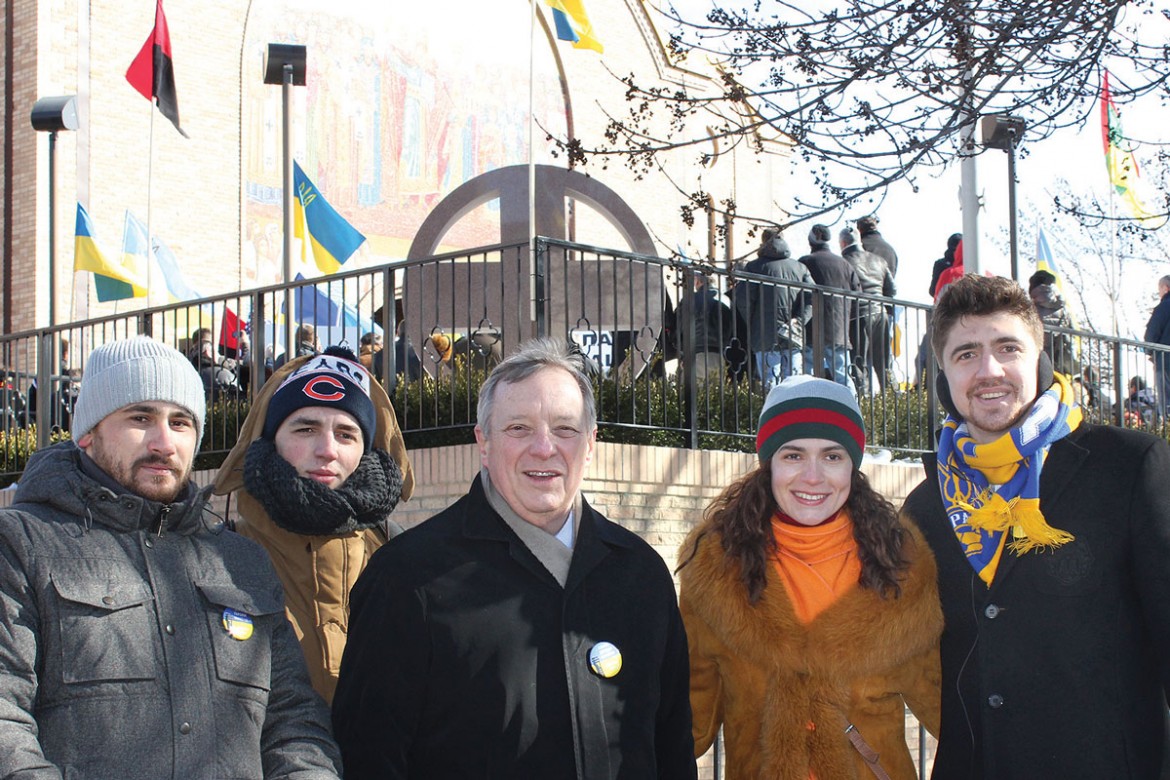 Sen. Dick Durbin with Ukrainian community activists at a rally in Chicago on February 22 that marked the first anniversary of the deaths of the Heavenly Brigade in Kyiv.

During his remarks, he spoke of attending a rally in Chicago over the weekend to demonstrate solidarity with the government and people of Ukraine.

“One can’t be effective in your job without a sense of history,” Sen. Durbin said to Secretary Kerry. “It was Sunday in Chicago and I attended a rally outside the Catholic church in the Ukrainian village. I spoke to the people there who were holding many Ukrainian flags and posters. But, they were also holding Lithuanian flags and Polish flags; they have a sense of history too. They have endured – personally and through their families – the aggression of the Soviets and the Russians.”

“I’m worried about where we are and I’ve joined my colleagues here – Democrats and Republicans – urging you to call on the President to provide defensive arms to Ukraine and to do it quickly,” the Illinois senator said.

On Sunday, February 22, Sen. Durbin – who co-chairs the recently created Senate Ukraine Caucus – spoke at a rally in Chicago to demonstrate solidarity with the government and people of Ukraine in opposing Russia’s military invasion and supporting U.S. military assistance for Ukraine. The event was held on the anniversary of the Maidan violence that claimed more than 100 lives in Kyiv. The event brought together the Ukrainian Congress Committee of America’s Illinois Division, major organizations within Chicago’s Ukrainian community and representatives of other ethnic communities in Chicagoland.

Last week, Sen. Durbin and a bipartisan group of senators sent a letter to Secretary Kerry requesting that he immediately tighten international sanctions against Russia and provide defensive weapons to Ukraine. The senators also called on Secretary Kerry to redouble efforts to ensure Ukraine’s long-term political and economic future in the face of Russian destabilization.