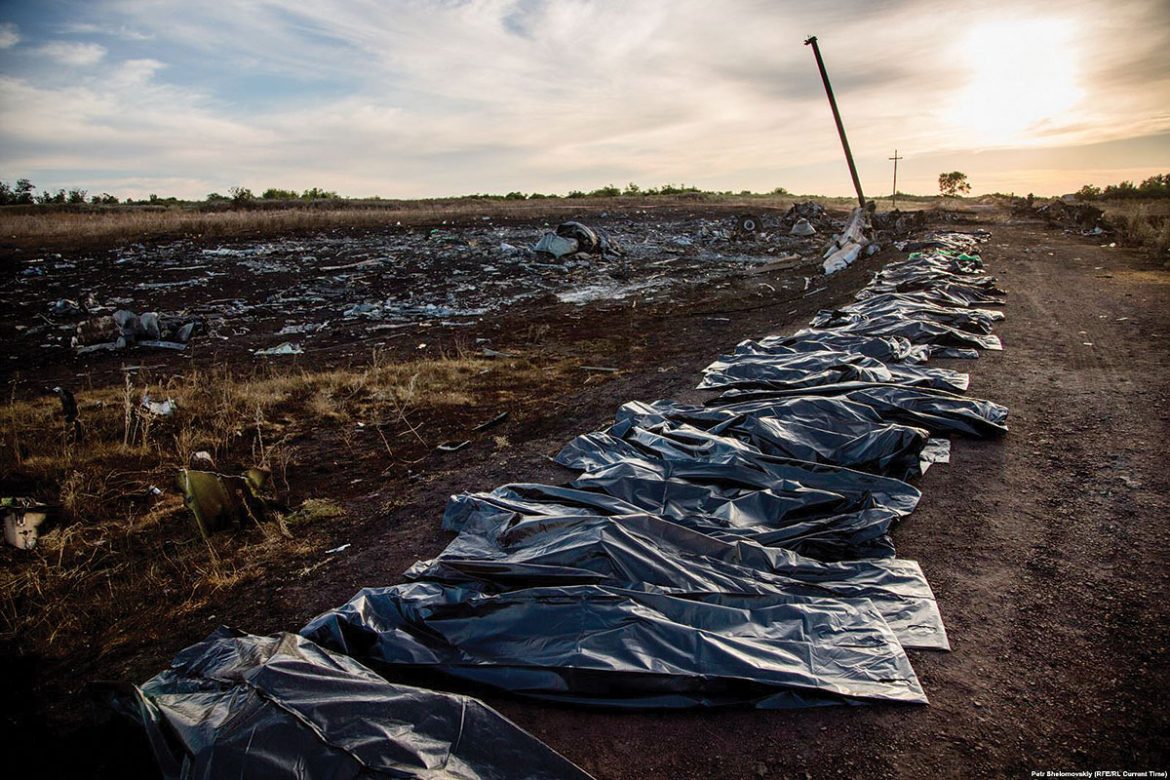 At the site of the downing of Malaysia Airlines Flight 17 in the Donetsk region of Ukraine.

KYIV – A Dutch-led international probe has concluded that a sophisticated anti-aircraft Buk missile system that was used to shoot down Malaysia Airlines Flight 17 (MH17) over eastern Ukraine on July 17, 2014, came from Russia.

It allegedly originated at a Russian military base in Kursk, some 216 kilometers from Ukraine’s second largest city of Kharkiv, and belonged to the 53rd Anti-Aircraft Missile Brigade, Dutch prosecutor Fred Westerbeke said on May 24 in the Utrecht province city of Bunnik during a briefing.

Dutch authorities led the Joint Investigative Team (JIT) because the flight nearly four years ago to Kuala Lumpur originated in the country’s capital of Amsterdam and 63 percent of the passengers who perished were from Holland. Investigators from Australia, Belgium, Malaysia and Ukraine also comprise the JIT.

“The JIT is convinced that the BUK-TELAR that was used to down MH17, originates from the 53rd Anti-Aircraft Missile Brigade, … a unit of the Russian army from Kursk in the Russian Federation. The JIT reached this conclusion after extensive comparative research,” The Netherlands Public Prosecution Service said on its website.

According to the Associated Press, “Mr. Westerbeke said the JIT is not yet ready to name suspects, but added: ‘I can say that we are now entering the… last phase of the investigation. When we will be ready, it is not possible to say at the moment, because there is still a lot of work to do.’”

Russia’s Defense Ministry denied that the Buk system ever crossed the Russian-Ukrainian border in a statement released the same day. 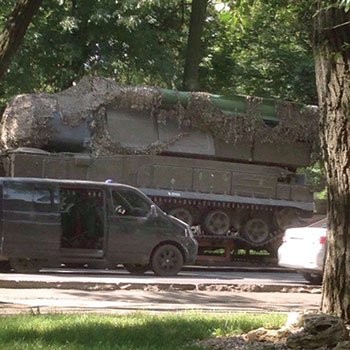 This photograph was probably taken on July 17, 2014, in the town of Makiyivka of Donetsk Oblast, according to the Dutch-led team investigating the downing of MH17. It shows a Russian-made Buk 332 missile system that was allegedly used to shoot down the passenger airplane on the same day, killing all 298 people on board near the town of Torez in the same region.

“The Defense Ministry of Russia from the first hours after the tragedy and in the future officially denied the Ukrainians’ insinuations about the alleged involvement of Russian servicemen in the catastrophe over the skies of Ukraine and has provided relevant evidence to the Dutch investigative team,” Moscow said, as cited by Kremlin-controlled RIA Novosti.

Two years ago, the JIT said the passenger plane was shot down by a Buk 9M38 missile fired near Torez in Donetsk Oblast which was controlled by Russia-led forces that later hurriedly returned across the border to Russia.

This week, the JIT identified the exact Russian military unit allegedly involved in the downing of MH17.

British-based open-source data sleuth Bellingcat had arrived at the same conclusion as the Dutch-led JIT.

Bellingcat has shared its findings with the JIT and has identified Russia’s 53rd Brigade of Kursk as the unit that transported the Buk missile system to and from Ukraine in previous reports using geolocation technology, including and video and photographic analysis.

Ukraine’s intelligence has also provided a trove of evidence, which included intercepted phone calls, to the JIT.

Bellingcat and The Insider announced they would hold a news conference at The Hague on May 25 to release an updated report on their findings.

When MH17 was downed, Ukraine was in the midst of a summer offensive to regain occupied territory in the Donbas that Moscow-led forces had covertly invaded in April 2014.

The successful campaign led the Kremlin to increasingly escalate warfare by deploying more advanced weapons and culminated with the battle of Ilovaisk in August 2014 that led to the first unfulfilled truce, known as Minsk I, a month later. The second truce was brokered in the Belarusian capital  in February 2015, after the battle of Debaltseve.

Ukraine lost both battles, both of which saw regular Russian forces swiftly augment irregular Kremlin-led forces that resulted in peace agreements. Cross-border shelling from Russia had preceded the Ilovaisk battle, enabling the free flow of Russian soldiers and weapons across Ukraine’s border. The acts of war were also documented by Bellingcat, but have gone largely ignored by the West.

Over 10,300 Ukrainians have died in the Donbas war, according to the United Nations, and some 1.7 million have been internally displaced.

Western sanctions against Russia were already in place when MH17 was shot down due to Moscow’s illegal annexation of the Ukrainian territory of Crimea that took place in March 2014.

After the MH17 tragedy, the European Union expanded its sanctions to include an arms embargo and financial restrictions on Russian businesses. The U.S. followed through with its own set of measures.

“The major sanctions we’re announcing today will continue to ratchet up the pressure on Russia, including the cronies and companies supporting Russia’s illegal activities in the Ukraine,” then-President Barack Obama said on July 29, 2014. “In other words, today Russia is once again isolating itself from the international community, setting back decades of genuine progress.”

As the American president made the announcement, the Dutch-led investigators still weren’t being given full access to the MH17 crash site by armed forces commanded by Russia.

“Dutch investigators have yet to lay eyes on the wreckage or the human remains believed still to be strewn across the huge debris field near the town of Torez,” CNN reported.

Since the MH17 tragedy, Russia has offered numerous explanations for the plane’s downing. They include the involvement of Central Intelligence Agency of the U.S. or Ukraine’s Air Force, as well as other obfuscating versions of the event.

A nationwide survey conducted by the Moscow-based Yuri Levada Analytical Center found that only 2 percent of respondents believe that the plane’s downing was the fault of their government or its military proxies in the Donbas.