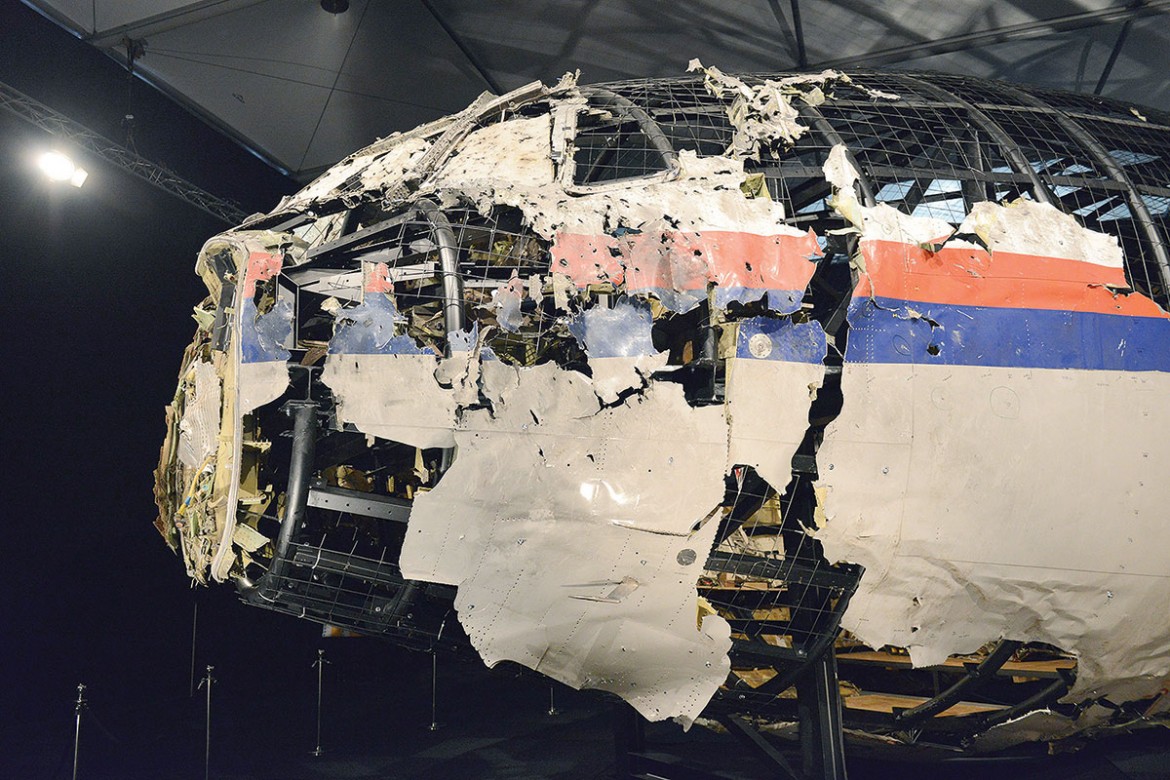 The reconstructed fuselage of MH17 as it appeared at the news conference held by the Dutch Safety Board in Gilze-Rijen, Netherlands, to report the findings of its investigation into the downing of the Malaysia Airlines passenger plane.

Dutch investigators say that a Malaysia Airlines passenger plane that crashed in a conflict zone in eastern Ukraine in July 2014 was brought down by a Russian-made Buk surface-to-air missile.

The report presented by the Dutch Safety Board on October 13 does not specify the exact location from which the missile that downed MH17 was fired, but identifies a 320-square-kilometer area that was mostly under the control of Russian-backed separatists at the time.

The missile detonated less than a meter to the left of the aircraft’s cockpit, according to the report, killing the pilots instantly and causing the aircraft to break apart.

Board head Tjibbe Joustra stressed that investigators sought to answer the question of why Malaysia Airlines was flying over a conflict zone. He said the airline should have recognized the risks, but noted that the carrier was not alone. Sixty-one airlines were flying over eastern Ukraine at the time, in the apparent belief that their aircraft were flying at high enough altitudes to avoid danger. “Nobody gave any thought” to the risk, Mr. Joustra said.

Mr. Joustra, speaking at a press conference at a military base in the southern Netherlands, said Kyiv should have closed the air space over eastern Ukraine because of the conflict with pro-Russian separatists.

MH17 was on a routine flight from Amsterdam to Kuala Lumpur when it crashed in rebel-held eastern Ukraine during heavy fighting between Ukrainian forces and pro-Russian separatists. All 298 people aboard died.

Earlier on October 13, the Dutch Safety Board reportedly told relatives of the passengers that all those aboard the plane immediately lost consciousness when it was hit by a missile.

But the report itself suggested that some passengers may have been conscious after the missile struck, noting that one victim was found wearing an emergency oxygen mask.

The Dutch Safety Board issued its final report after a 15-month inquiry that included painstakingly reassembling the cockpit area of the plane from wreckage collected at the crash site. The reconstructed nose of the plane, shown to the press, was riddled with shrapnel holes.

“As a result of the warhead’s detonation, thousands of small preformed metal objects were ejected with tremendous force,” Mr. Joustra said. “Many of these objects were bow tie-shaped or cubic [and] several hundreds of them hit the airplane.”

The Dutch Safety Board did not assign blame as to who downed the plane, something beyond the scope of its authority under rules governing international flight crash investigations.

A separate Dutch-led criminal investigation is expected to publish its findings in several months’ time.

Washington on October 13 welcomed the report as an “important milestone in the effort to hold accountable those responsible” for the disaster.

“The United States will fully support all efforts to bring to justice those responsible,” said U.S. National Security Council spokesman Ned Price. “Our assessment is unchanged – MH17 was shot down by a surface-to-air missile fired from separatist-controlled territory in eastern Ukraine.”

Malaysia’s government responded to the report on October 13 by vowing to seek the prosecution of what it called “trigger-happy criminals” who downed the civilian passenger plane.

Dutch Prime Minister Mark Rutte said the report by Dutch investigators was “an important building block” in the criminal probe of the tragedy.

He called on Russia to provide “complete cooperation” with the criminal probe being led by Dutch prosecutors.

But the Kremlin criticized the report and investigation as “biased,” with Deputy Foreign Affairs Minister Sergei Ryabkov saying that, despite Moscow’s efforts to organize an MH17 probe, “there are obvious attempts to carry out a political order.”

Nick de Larrinaga, the Europe editor for Jane’s Defense Weekly, rejected the Kremlin’s reaction with analysis that goes a step beyond the Dutch report – identifying the Buk missile as a 9M38M1, the newest version of a Buk that is being used by Russia rather than older versions, which Russia says it no longer uses.

The Dutch report did not draw a conclusion about which type of Buk missile was used.

Mr. De Larrinaga concluded after the release of the Dutch report that the “overall picture is conclusive” and that the MH17 was shot down by a surface-to-air missile from a Buk operated from rebel-held territory in east Ukraine.”

He also noted that Russia “has veered wildly in its claims over who and what shot down MH17,” noting that “initially the Russian Ministry of Defense made the claim that it was shot down by Ukrainian Su-25 ground-attack aircraft.”

Mr. De Larrinaga also said claims made earlier on October 13 by Almaz-Antey – a Russian state-controlled firm that produces Buk missile systems – “should be discounted as disinformation and propaganda aimed at drawing attention away from the Dutch report.”

Just hours before the release of the Dutch report, the head of Almaz-Antey, Yan Novikov sought to debunk some of the conclusions it said would be in the investigators’ report.

Mr. Novikov told a press conference in Moscow on October 13 that simulations conducted by his company concluded that both the location from which the missile was launched and the type of missile used differ from those determined by Dutch investigators.

He did not reveal how he knew what would be in the Dutch report, which had not yet been released, or whether he had been given an advance copy of the findings.

Mr. Novikov said his company’s tests showed that “if the Boeing 777 of the Malaysia Airlines had been shot down with the Buk missile-launching system then it was launched from Zaroshchenske settlement [in Ukraine’s Donetsk region].”

Pro-Russian separatists in Ukraine maintain that the Zaroshchenske settlement was controlled by Ukrainian armed forces.

That location would contradict the Dutch Safety Board’s report, which indicated that the missile was launched near the settlement of Snizhne.​

But Mr. Novikov claimed that simulations conducted by his company showed that a missile launched from Snizhne could not have hit the plane’s left-wing engine, which had been a presumed cause of the airplane’s crash.

The head of Almaz-Antey also said experiments by his company showed the plane was struck by a missile from an older model of the Buk anti-aircraft system, the 9M38, which had long been withdrawn from Russian military service.

Mr. Novikov said the upcoming Dutch report would mention I-beam shaped striking elements in the wreckage that would match a newer model of the Buk system, the 9M38M1. That model is currently in use by both Russian and Ukrainian armed forces.

“The only thing that we do not yet understand is why fragments of 9M38M1 are among the evidence,” he said.

Mr. Novikov did not say who was to blame for downing the aircraft.

However, both Moscow and Almaz-Antey claimed – after initial evidence of Buk missile fragments emerged – that the plane was likely brought down by a Buk missile fired by Ukrainian government forces.

In November, Russian state-controlled TV broadcast photographs that it said suggested MH17 was shot down by a Ukrainian fighter jet.

Those photos were later determined to be forgeries by some Western experts who examined them.

Ukrainian officials and several Western officials have said the missile that hit the plane was brought into eastern Ukraine from Russia and launched from rebel-held territory.

With reporting by Reuters, the Associated Press, Agence France-Presse, TASS, and Interfax.