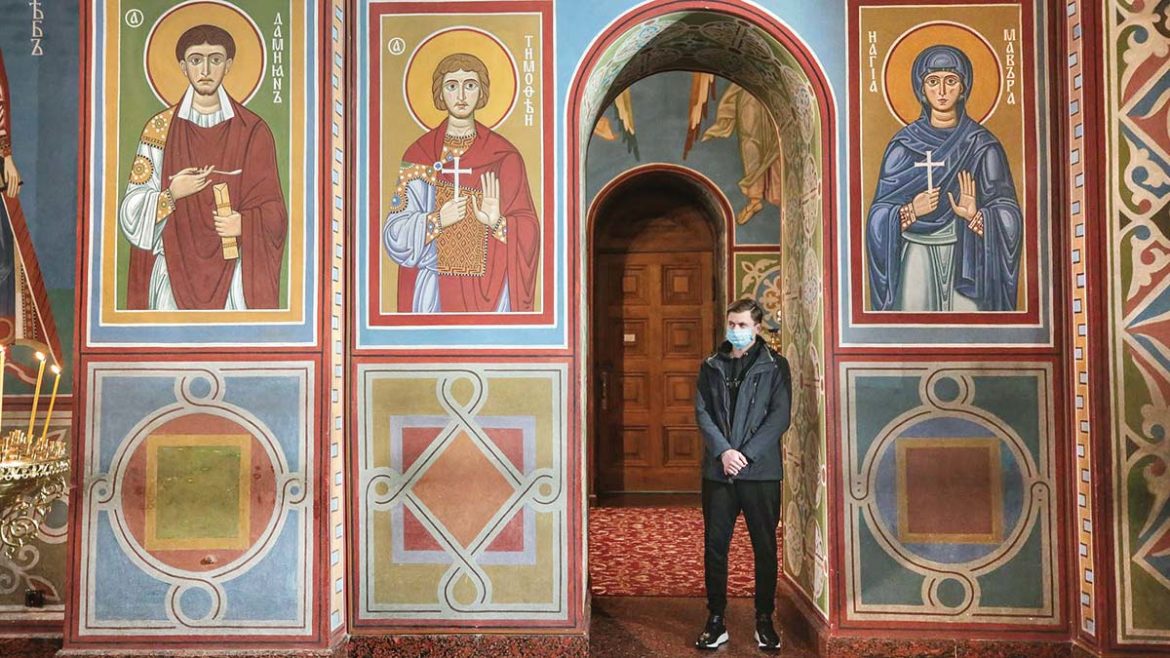 A believer at the Easter service in St. Michael’s Golden-Domed Monastery in Kyiv.

KYIV – As Christians of the Eastern Churches prepared to celebrate Easter on April 19 (according to the Julian calendar), there was concern that potential large crowds of worshippers could further spread COVID-19. According to Ukraine’s Minister of Health Maksym Stepanov, the number of those infected with the novel coronavirus had grown significantly after Palm Sunday services held a week earlier.

This fact compelled the government to focus on preventing crowds on Easter. According to the National Police, about 7.5 million citizens took part in religious services last year on Easter. If a tenth of the faithful came to churches this year, Ukraine could suffer another coronavirus outbreak, according to the director of the Ministry of Internal Affairs Communication Depart­ment, Artem Shevchenko.

“To prevent this, we held talks with the Council of Churches and asked the faithful not to come to services, but to stay at home,” Mr. Shevchenko said. He added that since the start of restrictive measures in the country, police have made 7,000 administrative reports. There are clergy on this list as well. “According to the decision of the Minister of Internal Affairs, all law enforcement officers who serve near churches are fully provided with all necessary means of protection for a few days in advance,” said Mr. Shevchenko. Some religious centers, such as Kyiv’s Pecherska Lavra, are closed to visitors; police and guards are on duty to prevent anyone from entering.

Amid the nationwide coronavirus quarantine, Metropolitan Epifaniy, primate of the Orthodox Church of Ukraine (OCU), held Easter services in Kyiv’s St. Michael’s Golden-Domed Monastery. The Church and media representatives this year arranged an online broadcast of the Easter liturgy. “We unite in prayer, and may the Lord’s blessing be upon us all. May peace, hope and love prevail,” Metropolitan Epifaniy said. The service, held without the direct participation of the faithful, lasted more than three hours.

On Holy Thursday, Metropolitan Epifaniy and the patriarch of the Ukrainian Greek-Catholic Church (UGCC), Sviatoslav, called on believers to celebrate Easter at home and not expose themselves and relatives to danger.

“Of course, we will celebrate the Resurrection of Christ under special conditions. But we see that our believers have responded to the Church’s call to stay at home. At the latest service in Kyiv’s St. Michael’s Golden-Domed Monastery, we saw that people responded to our call and are joining prayers online,” the OCU leader said.

“We asked all our believers to celebrate this Easter at home. And we will be able to rejoice this Easter together, but without endangering your health and life. Therefore, we will pray together, pray online. We will bless Easter baskets while you’re home,” Patriarch Sviatoslav added. “Put on your best clothes on Easter, turn on the telecommunications available to you, and spiritually join the Easter divine liturgy,” the UGCC primate told his faithful before Easter.

Pro-Moscow Orthodox Churches in Russia and Ukraine have sent mixed signals to congregations about whether they can attend Easter services. The head of the Ukrainian Orthodox Church – Moscow Patriarchate (UOC-MP), Metropolitan Onufriy, said that all believers could come and pray outside churches while maintaining social distancing. At the same time, leaders of the Russian Orthodox Church in Russia were clear in forbidding their parishioners from visiting churches on Easter.

Worship services were held in 13,658 churches in all regions of the Ukraine on April 18 and 19. A total of 26,500 police and military personnel of the National Guard of Ukraine provided public security and maintained order. The efforts of law enforcement agencies were primarily aimed at ensuring strict compliance with all quarantine restrictions. In an apparent effort to prevent believers from gathering, local authorities in the city of Dnipro dug a trench outside the entrance to a churchyard.

“Today, we can say that citizens have shown legal awareness and listened to our calls to comply with quarantine restrictions,” said the chief of the National Police of Ukraine, Ihor Klymenko. “However, during the past 24 hours, there were more than 10 faithful [gathered at one time] in 19 places of worship in the 13 regions. The police have drawn up three administrative reports and initiated one criminal proceeding. The rest of the materials are being carefully reviewed,” added Mr. Klymenko. Most of the quarantine violations during services were recorded in the Donetsk region.

All clergy who violated quarantine restrictions in church on Easter will be held responsible, said Ukraine’s Deputy Minister of Internal Affairs Anton Herashchenko. “If someone gets sick from those parishioners who were in the church that day and, God forbid, the case has a lethal outcome, it could be a criminal sentence, imprisonment. If no one gets sick, and the statistics will prove this in the next week and a half, they will be fined or suspended. But nobody will leave it just like that,” he stressed on the air of the TV channel Ukraine 24. “The overwhelming majority of clergy and pastors have agreed that they should comply with quarantine rules and not allow people to enter churches, where the virus can be transmitted in a confined space,” Mr. Herashchenko added.

The city of Pochayiv in the Ternopil region is closed for entry and exit as of 10 a.m. on April 21. The decision was made at an extraordinary meeting of the Kremenets District emergency headquarters after the number of patients suffering from coronavirus in Pochayiv in the previous 24 hours increased by 13 persons. “In view of this and the breach of quarantine conditions during the Easter services on the territory of Pochayiv, a decision was made to introduce a regime of entry-exit restriction for the city of Pochayiv. We ask the citizens of Pochayiv to return to the city and stay home. We urge guests to leave Pochayiv immediately,” Vyacheslav Onyshkevych, the deputy head of the Kremenets District Administration, said. Checkpoints in Pochayiv are being reinforced by Kremenets Military Commissariat patrols, as well as by personnel who will disinfect vehicles. According to the Ternopil Sanitary Service, three priests of the Pochayiv Lavra, which is under the jurisdiction of the UOC-MP, are confirmed to be ill with the coronavirus.

Currently, in most areas of the country, the situation is calm and controlled, said President Volodymyr Zelenskyy. In most churches, agreements were reached with the local authorities and the National Police to prevent large crowds. Worship services were held in most churches either in the presence of a small number of parishioners who maintained social distancing or behind closed doors with the services livestreamed.

“One hundred thirty thousand believers came to worship this year. Last year, seven and a half million parishioners gathered in churches for Easter. This difference shows the awareness of Ukrainians, our caring attitude towards our loved ones. We have truly shown that Easter is the victory of life over death,” Mr. Zelenskyy said.

Yulia Mendel, the president’s spokeswoman, added that “the situation was getting out of hand, for example, in Sviatohirsk, Donetsk region, where around 300 people gathered in the church without observing the rules of protection, without masks and distancing. Unfortunately, now we have to be prepared that, a week later, the COVID-19 coronavirus will break out in Sviatohirsk,” said the spokeswoman for the President.